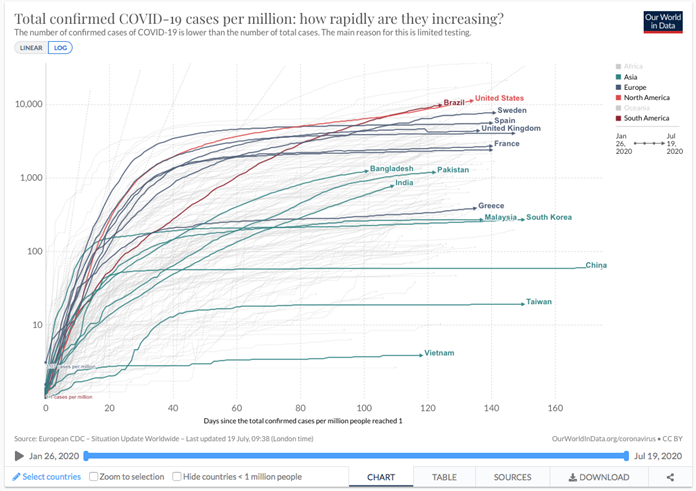 Some big nations have missed the opportunity from those who did well in quickly curbing the spread of the coronavirus. A Penang Observer looks at a few telling graphs.

If Covid-19 was a game of golf that everyone had to take part in, just as they must with Covid-19, then the ones most studied would be those who had proved themselves best at the game, ie the ‘Tiger Woods’ of the world.

So who are the Tiger Woods of Covid-19?

The Tiger Woods of Covid-19 are those at the bottom (see the graph at the top). They are the ones who have “flattened the curve” quickly and effectively: Vietnam, Taiwan, Thailand, China and a number of lesser-watched countries.

In a tight group above them are the talented ‘club professionals’ who quickly caught on and moved with resolve: Malaysia, New Zealand, Greece, South Korea and a number of others.

In a close grouping just above them are Bangladesh, India and Pakistan. This is important because their combined total population is 1.8 billion, more than twice the population of the US and Europe combined, but they have yet to flatten the curve, Their rise in infections continues to accelerate. This is a cause for real concern.

The countries of Europe who were caught unaware but have since succeeded in flattening the curve, come next.

At the top of the heap: the US, Brazil and Sweden. These three and a few lesser lights have, like India and its two most populous neighbours, failed to contain the infections. They now have too many to track and control. For them the future looks bleak.

The graph at the top is logarithmic. The exact same statistics on a linear graph, are as follows.

This more readily illustrates the calm regularity of control in the best, who are gathered around the lower axis, and the out-of-control acceleration in the worst, as they accelerate into the unknown.

If you were the United States or Brazil, the two who in Covid-19 terms are most dramatically heading towards a stratosphere of hurt (with an alarmingly rising death toll as collateral damage), where would you look to for guidance?

If your performance in golfing terms represented an inability to hit the ball even half a revolution, while those most adept, the Tiger Woods of the game, are smacking drives straight and true 300 yards down the fairway (which is precisely what the comparative performances best-to-worst represents), who would you be most inclined to listen to?

A failure to flatten the curve means a number of things – all of which are bad. The longer you spend trying to contain the infection, the longer normal life is put on hold, the greater the pressure on your medical system, the more the strain on your financial structure, the greater the demands on your government, and the sooner cracks will appear. The following, and final, chart illustrates this point.

The small green bump on the bottom left, is China. The almost no bump at all, is Vietnam. Each had control in under a month. Others haven’t. One shows no signs of reaching it any time soon.

There’s a saying in sport: “Stats don’t lie.” So why is the thin red line not paying attention to how the best performers achieved what they did? Isn’t this an ideal opportunity for unity?

The challenge of Covid-19, combined with modern data-gathering capabilities, advanced real-time communications, the world-wide sharing of statistics collated in a universally understandable and readily comparable statistical format, offers the world, perhaps for the first time ever, an unbiased and freely available measure – and therefore unrivalled opportunity – to gauge how successfully or otherwise each nation is doing its job.

How each nation handles Covid-19 offers an unbiased, independent audit of that country. It provides an accurate and hard-to-fudge-or-‘spin’, comparison by which we can gauge the comparative performance of each – a report card, if you will, of national performance.

Is sparing the blushes of poor administration or inept leadership acceptable justification for failing and justifiable reason for not learning from the facts … and from those who do things better than you?

The Tiger Woods of Covid-19 is someone the duffers in the rough should study. Merely thinking you are perfect doesn’t cut it. Stats don’t lie, but they do provide clues we can learn from.