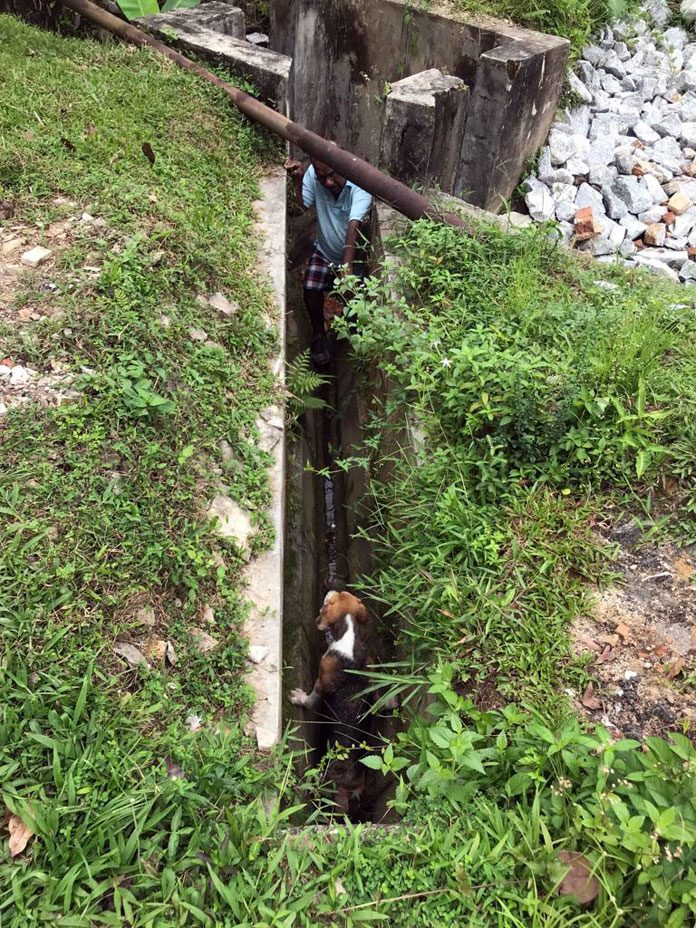 Benedict Lopez describes how a septuagenarian saved a beagle that had fallen into a drain – twice.

Not too often do we come acoss senior citizens performing heroic deeds by taking calculated risks.

Once such person is Peter Raiappan, 75, an Aliran member, who discounted his personal safety and fearlessly climbed into a deep drain in Medan Damansara to rescue a beagle.

I happened to visit a vacant plot of TNB land, which is designated to be a mini-farm akin to the one in Bangsar, when I noticed a beagle trapped in a deep drain. The helpless creature had perhaps fallen into the drain the previous night.

Upon hearing its soft bark, I contacted Peter to get someone to rescue the dog. I could not go into the drain myself as I had a right shoulder injury. So I presumed he would call someone younger to assist us in rescuing the beagle.

Surprisingly, a few minutes later, Peter arrived alone as this place is just within the vicinity of his home.

I immediately asked him whom he had contacted to rescue the beagle but he told me he would go into the drain himself to undertake the rescue effort.

I was a bit apprehensive about Peter carrying out this rescue mission given his age.

But Peter was adamant he could do it as he was familiar with the terrain. This passionate animal lover slowly climbed down into the drain and very professionally tapped the beagle on the forehead a few times before carrying it out.

Just as Peter came out of the drain and placed the beagle on the ground, it ran off and promptly fell into the drain again!

Peter once again had to embark on Rescue Mission No. 2.

Following the second rescue mission, he immediately carried the beagle and placed it in the back seat of his car and drove back home.

Upon reaching home, Peter inserted a message on a Medan Damansara WhatsApp group.

Shortly after, the dog’s owner arrived at Peter’s home to collect the beagle.

Peter later informed me the beagle gave him an appreciative bark as it was leaving.

Definitely, a momentous day for the both of us to cherish and remember for a long time.

If in life we cannot do great things, we can at least do little things in a great way.

If we aspire to become a caring society, we should not just stop at caring for other people; we should also see to it that no animals are neglected or left in distressing conditions. Peter is the epitome of a compassionate animal lover and a beacon for everyone to emulate.