The old has gone and the new has come – the new Malaysia is here to stay and there is no turning back, observes Anil Netto.

A group of ordinary people from diverse backgrounds came together yesterday in solidarity in George Town, Penang for the breaking of fast during the Muslim holy month of Ramadan.

They were first treated to a free flow dance by dancer-choreographer Aida Redza at the Armenian Street Park before the group strolled to a nearby restaurant for buka puasa.

Once settled in at the restaurant over a meal of tandoori with naan and tandoori biriani, the group chatted animatedly about what it meant for them to be in the new Malaysia and to experience a newfound sense of solidarity with their fellow sojourners in Malaysia.

Certainly, three weeks after the 9 May general election, the sense of euphoria among the motley crew yesterday was still palpable. People were still savouring the moment as if it was yesterday, pinching themselves to make sure they weren’t dreaming the whole thing up. They recalled excitedly how they felt on the night of 9 May, barely able to grasp that an unbelievable new reality was being ushered in, a new order replacing the old corrupt, decaying regime.

The group’s Penang representative Jenny Liew, addressing the gathering, said it was lovely to see so many people coming together for buka puasa. “It is the fifth year Malaysians for Malaysia Penang is organising this – and this is the biggest group ever!” she gushed.

For the past four years, the turnout at similar gatherings had hovered around 10-15 participants. This time around, the turnout swelled to around 70 participants, including civil society activists, Invoke volunteers, polling and counting agents, a couple of pastors, newly elected Penang state assembly member for Bukit Gelugor Syerleena Abdul Rashid, and a new Seberang Perai municipal councillor. Many of them had volunteered as polling and counting agents as well.

“We must treasure this camaraderie and nurture it so that we don’t fall back to the past again,” Jenny told the diners, adding that many want it to be normal for Malaysians of all faiths and backgrounds to come together and share a meal.

“We want to write a new narrative for our beloved nation because the old is gone and the new has come – the #MalaysiaBaru!”

Yes, the new Malaysia is here to stay and there is no turning back. On the group’s Facebook page was posted a simple message: “Congratulations! We made history together!” 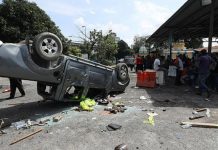