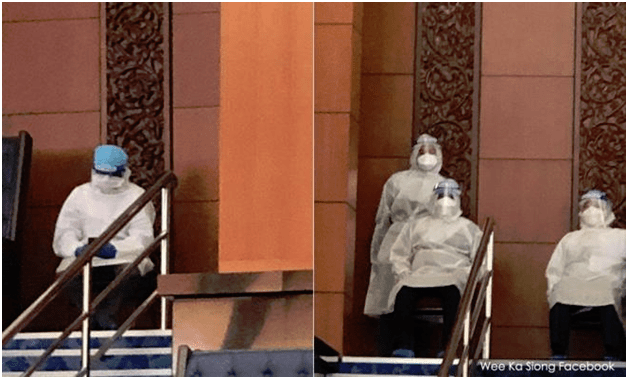 This is not a caring government; it is a government that takes care of politicians who are on their side and who support their survival only, P Ramakrishnan writes.

It’s all about them – not about you or the nation! Whatever they do is to consolidate their power and remain in office – come what may.

Yesterday, it was absolutely clear that the backdoor government would have fallen. They did not have the numbers and they were desperate to cling to power.

The bloc voting after debates on the federal territories budget positively confirmed this fact. In the bloc voting, the results were 110 for, seven against, 31 abstentions and 72 absent. Without the two ‘aliens’, the government’s vote would have been only 108 whereas the opposition would have the support of 110 MPs (7+31+72 = 110) in the 222-seat Parliament. The backdoor government would have surely fallen had a vote of confidence taken place.

In desperation, the backdoor government resorted to this risk-involving tactic, ignoring the health and safety of MPs to save their skin. The government brought the MPs under home quarantine to Parliament to secure its votes in order to continue to remain in power. This was done for selfish reasons.

One may ask, what was the rationale for exposing Parliament to the risk of contamination by bringing those MPs under home quarantine? Dressed in personal protective equipment, they looked like aliens from outer space! Were they adequately identified as those they were claimed to be?

When our frontline healthcare is so badly stretched and in dire need of whatever help that was available and possible, it is unforgiveable that an ambulance had to be spared to bring these MPs to Parliament just to vote. It was not a life-and-death threatening matter for the nation to require these MPs to be present in Parliament yesterday – but it definitely was a life-and-death matter for the government.

Support the struggle to build a Malaysia based on Justice, Freedom, Solidarity:
READ MORE:  Malaysia needs broad-based policymaking to beat pandemic and save livelihoods

As such, rules could be bent, sacrifices could be made at the risk of health, an ambulance could be spared, ambulance drivers in this instance did not undertake their duty to rush to a house where a person has had a heart attack or to a place where a person had suffered serious injury – but their services were needed to ferry three MPs because a political party was at the brink of collapse! What a crying shame.

According to a Bernama report, “the MPs were brought in an ambulance and upon arrival at Parliament were placed in a special room.” Strangely and suddenly, there was extra space for these three MPs but there was no space for social media journalists to cover parliamentary proceedings!

Why waste the PPE attire on these people when it is sorely needed for people risking their lives attending to Covid patients?

This is not a caring government; they are not the government for the welfare of the people. They are a government that takes care of politicians who are on their side and who support their survival only.

In these appalling circumstances, the irresponsible act of the government cannot have any justification whatsoever and they must be fully condemned for what they did.

Many Malaysians would want this government to be defeated and thrown out. Will it happen soon during the final vote at the third reading of Budget 2021?

The Selangor state government could ignore the anti-DASH and the anti-SUKE residents, and the Penang state government ignore the fishermen because democracy is the tyranny of the majority and they can afford to lose the votes of these small segments of the people who are adverselyaffected, when they are confident that the majority want the highway and will still vote for them. Well, PKR Bukit Lanjan ADUN Elizabeth Wong won big in May 2018 despite the anti-DASH protests. Elections is a numbers game after all.

I voted PH in 2018 but now I can see that despite their rhetoric, they are not much different from the BN in practice. There’s more freedom of speech and press of course, but they don’t have to listen and they didn’t.

Which of the political parties and politicians really cares for the people. PSM and PRM perhaps but DAP, PKR?

If DAP cared for the people would the DAP led government of Penang be building those 3 man-made islands off the south coast of Penang, which would disrupt the livelihoods of fishermen. Would the state gov’t allow rampant high rise development on the hillslopes?

If the PKR-led government of Selangor really cared for the people, would they have degazetted the North Kuala Langat Forest Reserve which disrupts the livelihood of the Orang Asli and would they have routed the DASH elevated highway right through Damansara Perdana and Mutiara Damansara against the residents’ protests?
https://www.youtube.com/watch?v=dEOmsC24EB8

Our current lot of politicians are altruistic, the ends are for themselves, their political survival comes first, the people last.

Yes. A number of people who support PH are beginning ti feel that too having seen these politicians recent actions.We need a new party which works for the people but for now, there’s not much choice betwee the two blocs.

How representative is Aliran of the sentiments of the people and how are you sure that that the majority of Malaysians share Aliran members’ sentiments?

If the results of the string of byelections is anything to go by, the likelihood is that majority public sentiment has shifted towards PN, which would return with a larger majority of seats in parliament.

The realpolitic in Malaysia may not be in your favour right now.

Unfortunately, the PN government has again ‘survived’ by the skin of its teeth by devious means. It seems set on making this country a ‘ tin pot banana’ nation. That appears to be the future planned by this back door government for the next few years of its life for this country. They seem so proud of it.

ABOUT US
Aliran is a reform movement in Malaysia promoting justice, freedom and solidarity.
Contact us: aliran.malaysia@yahoo.com
FOLLOW US
Content may be reproduced without alteration but please attribute to aliran.com
wpDiscuz
7
0
Would love your thoughts, please comment.x
()
x
| Reply