Benedict Lopez catches up with the face of Patriot, retired Brigadier General Mohd Arshad Raji, to find out what drove these ex-service personnel to step forward.

Soldiers are instilled with values such as loyalty and allegiance to the Constitution, serving with honour and integrity and selfless service in defending the country. Their virtues among others include bravery, courage and patriotism.

Foreign and Malaysian soldiers served our country gallantly, especially during World War Two and the communist insurgency (1948-1969). Many made the supreme sacrifice: giving their lives for the country.

The cemeteries in Taiping and Batu Gajah are filled with the names of our fallen heroes. We owe them a debt of gratitude for the peace and freedom we enjoy today.

Many of our soldiers upon retirement choose to live a quiet life, often with a sense of fulfilment about their contributions towards the country. Some take on part-time jobs to keep themselves occupied, also spending their time in other forms of recreational activities like golfing, farming and fishing.

But there are a few who feel compelled to voice out their concerns and anxieties about issues confronting the nation.

Retired Brigadier General Mohd Arshad Raji is one such soldier who has remained steadfast, this time on a different kind of national service for the country: highlighting issues of critical public interest that are close to his heart.

Through the much-respected association he leads, the National Patriots Association or Patriot for short, he voices out the association’s views on a broad spectrum of issues.

Arshad does not mince his words in Patriot’s media releases, always candid and forthright on any issue he feels needs to be addressed. In these releases, he explains his uneasiness without fear or favour. Perhaps this disciplined, fearless approach stems from his long career in the army.

I first met Arshad at a friend’s 70th birthday party last December and chatted with him briefly about national issues. Even during this short conversation, his deep concern for the country was evident.

Recently, I caught up with him for a heart-to-heart talk at Patriot’s office in the Subang Business Centre, about 20km from Kuala Lumpur.

Patriot has a modest office, consisting of a small hall and a meeting room. Conspicuous in both places are photos of the founding fathers of the nation, the fourth and seventh prime minister Dr Mahathir Mohamad, army veterans and events depicting Malaysia’s multi-racial mosaic.

Born in 1943 in a small village in Ulu Langat, Selangor, Arshad studied at the Maxwell Road School in Kuala Lumpur.

Like his father before him, he began his career as a civil servant in the Prime Minister’s Department in Kuala Lumpur in 1963.

He was influenced to join the army in 1965 upon meeting the late General Tuanku Osman Jewa, the first Malaysian Armed Forces chief of staff who was a frequent visitor to the Prime Minister’s Department.

Upon completion of his army training at the then Federal Military College in Port Dickson, Arshad’s first posting was to the 6 Battalion, Royal Malay Regiment (first unit 6 Brigade) in Sungai Petani.

Arshad recalls the 1970s as the most challenging period of his army career as “the communist insurgency was still very much prevalent in the country”.

The brigadier general retired from the army in 1998, after completing 32 years of service.

Upon retirement from the army, Arshad worked with a friend for six years before calling it quits to lead a relatively quiet life.

But national service beckoned once again and Arshad and his ex-servicemen friends decided to step up to the plate after witnessing scandals like 1MDB plaguing the country. The formation of Patriot on 21 May 2017 served as a platform for these ex-servicemen to express their apprehensions on behalf of the people of this country.

Age has not mellowed down Arshad, who still feels he has to do his part for a better Malaysia. Now a septuagenarian, he draws his motivation and strength to persevere from friends and like-minded Malaysians. He stresses that Patriot is an apolitical NGO with committed objectives.

When pressed for his views on the performance of the current Pakatan Harapan government, Arshad feels they are moving in the right direction. In a recent address at a listed company, Arshad outlined Patriot’s primary objective: seeing the people “live in harmony and united in the belief that this country belongs to all of them”.

Patriot espouses the views of many moderate peace-loving Malaysians, who make up the majority of our people. The forces of good can be found among this majority, but regrettably it is the minority trouble-makers who often steal the limelight. With their nefarious antics, they are continually trying to create a chasm among the people by using racial and religious rhetoric.

The government must heed the apprehensions of these ex-servicemen if the nation is to advance politically and socially. In particular, it has to address the trepidations of the silent majority. 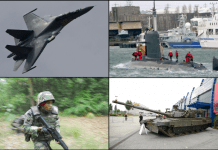