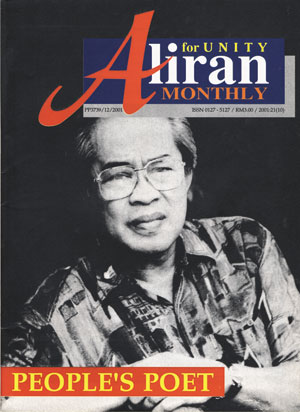 Wong Soak Koon translates another poem by Usman Awang into English and shows how it still has relevance almost six decades later.

In this season of intolerance and unthinking racism, I was propelled to take down from my bookshelf an old collection of Usman Awang’s poems. I remember how the sanity, the maturity of his verses had ministered to me in times past.

Here, I translate his memorable short poem Anak Jiran Tionghoa. At the fence, Ah Chew stands, securely confident that Iskandar will come out to join him; Iskandar will cross that barrier and welcome him.

The simplicity of this poem carries a deep message. It is a timely reminder to us, through the poet’s humane observation of two children at play, of shared experiences as we come together to build a multiracial nation.

Written in 1962, when independence was recent and new, the poet’s message is never didactic. Instead, it gently persuades us to return to the ‘innocence’ of children who do not bear grudges for long.

In some ways, this poem reminds me of Wordsworth’s belief that The Child is Father of the Man, telling us that we can learn from children if we have the humility. In addition, it recalls Robert Frost’s Mending Wall, where Frost warns us that before we build “fences”, we had better think clearly what we are fencing in and what we are fencing out.

So small, he stands near the fence

His bright eyes call to Iskandar

whoever passes, whoever has eyes

will see them sharing laughter

Chinese child, you were born here

in this green land of rubber estates and paddy fields

he will tell anyone

this is his homeland where he will bury his mother

See how the two wrestle for a toy pistol

ah, children in their innocence

fight, then come back to play together

Ah Chew has no teeth, not one

Iskandar wipes his runny nose with his sleeve

now they wait for the ice cream man to come

Beloved land, imbue them with your sacred guidance

their heart is your sky

their blood, your rivers

their breath, your air

Each reader will have her favourite verse, but I like the second verse which tells of duration and the timeframe of belonging to a homeland. The Chinese boy was born here, and such a birth is, in fact, enshrined in the Negaraku, our national anthem, in the line which reads “tanah tumpahnya darahku”, which refers to the foetal blood of birth.

In this riveting second verse, the birth of a child and then the long years which lead to growth, maturity and the death of a mother encapsulate the tests of time and of loyalty to a homeland.

Usman Awang’s selection of a simple word “hingus” in the fourth verse refers to more than a child’s runny nose since beringus connotes the innocence of childhood, of the freshness of experience.

Perhaps it is this childlike (never childish) trust that refuses to be easily manipulated by the powerful for their own cynical ends. I recommend that, time allowing, we reread what this national laureate (sasterawan negara) so wisely penned decades ago.