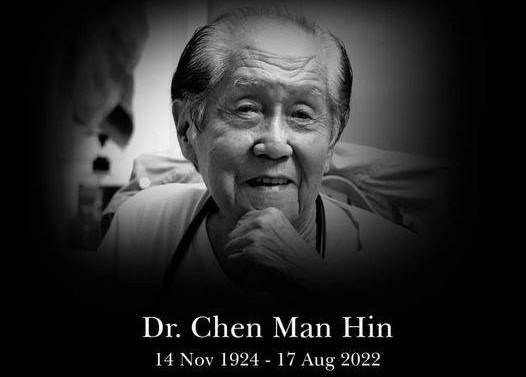 “With malice toward none, with charity for all, with firmness in the right as God gives us to see the right, let us strive on to finish the work we are in, to bind up the nation’s wounds …”

This lovely quotation alluding to a patriot’s motivation is more forgotten than remembered. It comes from the last paragraph of the second inaugural address given by Abraham Lincoln on 4 March 1865, about 40 days before his assassination.

The above extract sums up my impressions of Dr Chen Man Hin (14 November 1924 – 17 August 2022), who passed away yesterday at 97 after fighting for and staying true to the cause of the opposition DAP for 56 long years.

I had met him in my idealistic and impressionable teenage years in the 1960s. Having met so many other Malaysian leaders for 55 years as a journalist since then, I have seldom come across someone like Chen, who was the DAP’s founding chairman. As the quotation says, he had no malice towards anyone but only charity and love for all he surveyed.

I am still seduced by the view that it was this love or charity for all Chen met that sustained and motivated him through so many years of struggle, even in the depths of seeing some of his party comrades being detained under the draconian, infamous and inhuman Internal Security Act.

To be sure, in my years as a journalist, I have met many leaders I shall not name who are vengeful against fellow Malaysians ranged on the opposite side of their struggle, spitting fire and brimstone at their enemies, some of whom never knew they merited such a destiny in hell!

But this was never the style of Chen, who chose to be on the side of angels. He was a soft-spoken man who was also well spoken.

The words he used did not hurt the listener. Indeed, the words he spoke came across as a balm to soothe whatever hurt one had sustained and tended to convert them to the cause of his party.

Something in his almost simplistic attitude galvanised his formidable aptitude for patriotism. It has been my pleasure to recall time after time the avuncular in Chen. Thank you, my friend.

I have fought the good fight,

I have finished the race,

The aforesaid biblical quotation says it all. Chen Man Hin has fought the good fight, he has finished his race and he has kept the faith till his end.

It now remains for the faithful who survive him to carry the baton.

As we say a solemn goodbye to Chen, a kind and loving soul, we know he’s left the DAP well placed to secure his two dreams – a better nation and a better future for his fellow beloved Malaysians.

A good piece on Dr Chen Man Hin, the founder and stalwart of DAP.

Rest in Peace, Dr. Chen Man Hin. You were indeed a towering Malaysian