The march from Padang Merbok to Parliament, initiated by the Organisation for the Preservation of Natural Heritage (Peka), is taking place this morning, the last day of the current parliamentary sitting. Among those participating was Aliran’s Simon Tan, who recorded the above video.

They plan to deliver a memo to MPs in which they are calling for a constitutional amendment and legal reforms to enable greater federal control and more effective protection of Malaysian forests in the various states.

Over the last few decades, large swathes of primary forests have been cleared for logging, plantations and illegal farming. Companies have also encroached into indigenous people’s native customary land, displacing many communities.

An online petition started by Peka has so far collection over 175,000 signatures. The petition calls on the government to: 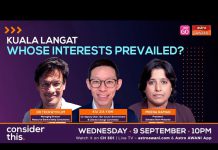