The parking rate increase and extra enforcement in KL seem to be merely a revenue-raising exercise, observes Wishful Accountant.

Many have written about the ins and outs of the new parking collecting arrangements under which substantial amounts are not going to Kuala Lumpur City Hall (DBKL) coffers but to a Federal Territory ministry staff welfare body instead.

This issue has died down and it is Kuala Lumpur residents under the DBKL who have lost out as they are now paying more parking charges – but DBKL revenue now will be less than before. Only in Malaysia (and maybe some other less developed nations) would such things happen.

I also refer to the issues raised in letters to the online news media such as this one and this one.

The writer of another letter has pointed out that in tandem with this increase, many parking spots in Bangsar and Hartamas and Taman Tun Dr Ismail have been marked out in red, meaning they have been exclusively rented out to business premises.

This in turn means there will be less free space for regular motorists but more secured and guaranteed collection for the body collecting the parking fees. Surely, this defeats the purpose of increasing the fees so that more empty space will be made available (the thinking being that most people will not park for a long time in view of the higher fees).

There has also been a marked increase in wheel-clamping all over town. This, I feel, is extremely good as I am sick and tired of being slowed down in KL by double-parked vehicles driven by selfish and lazy motorists who couldn’t be bothered to walk a little further to where there would be adequate legal parking space.

Nothing proves this better than the area in front of the income tax (LHDN) office at the Jalan Duta government complex, where cars are triple- and at times quadruple-parked while just a short distance away ample parking is available. That’s the lazy Malaysian motorist for you; so I am all for clamping and the inconvenience it causes to the recalcitrant motorist not to mention the hole in his or her pocket. Hooray, I say.

However, and a big bold HOWEVER, my question and concern is, what is the purpose of clamping and does the fee for removing the clamp go entirely to DBKL? Referring to the Peronda Parkir mentioned by the writer of this letter, does this vehicle belong to DBKL and does DBKL receive 100 per cent of the fee?

Mind you, the wheel-clamping does not focus only on those who double park and obstruct traffic. Instead, it also appears to be aimed at those parking at non-designated spots and back lanes – which is clearly a revenue-raising exercise and would not do much to reduce congestion.

The week before Christmas, I saw as many as seven personnel clamping cars parked in the side roads behind Affin Bank in Jalan Telawi, Bangsar. But they completely avoided the double-parked cars in the main Telawi lanes, especially in front of the police beat near the food court.

Why? I think because they seem to prefer doing this exercise at places where they will not be harassed by motorists and away from the eyes of onlookers.

This clamping operation is prevalent in Bangsar and Hartamas, but I rarely see it happening in Taman Tun Dr Ismail or Bukit Damansara near Plaza Damansara where the roads are often turned into a large car park by all and sundry. Maybe there are valid reasons for this.

In conclusion, the whole parking rate increase and extra enforcement seem to be merely a revenue-raising exercise and does little to reduce congestion and inconvenience to motorists in the cases I observed.

This is quite similar to the DBKL business and signboard licence renewal process that suddenly saw a lot of diligence when the service provider personnel visited almost all the premises in KL to ascertain their respective licence status and stuck not-so-nice stickers on doors.

This should not be how local councils should conduct their business. Every attempt should be made to increase revenue to local authority coffers – legitimately and justly – so that service levels to ratepayers can be increased and enhanced. 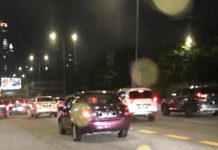 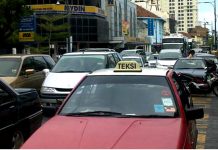 A new mantra for reducing congestion: Don’t move people at all!

Wheel clamping is not about managing current situation.