Malaysians more than ever need to watch out for any signs of external interference aimed at putting someone scary in power, writes Wandering Malaysian.

So it turns out the Russians allegedly influenced American voters to elect the orange-haired guy to be their president?

Perhaps the Russians also influenced the Brits to follow that clown Nigel Farage to Brexit?

And the constitutional referendum that led to the Italians following the lead of the comedian-turned-political leader Grillo may perhaps have been orchestrated by the Kremlin?

The way he is being depicted by certain quarters, Putin, we are led to believe, having failed to achieve a communist revolution, has embraced a populist revolution for global domination led by scary clowns.

On the other hand, the Americans should not in the least be surprised at interference in their elections. The United States has a rich history of attempting to influence presidential elections in other countries.

According to Dov Levin of Carnegie Mellon University, the United States has done so as many as 81 times between 1946 and 2000 (not counting supporting military coups and regime change of candidates whom they disliked as in Iran, Guatemala and Chile). Talk about chickens coming home to roost.

With all this talk of interference, we Malaysians need to be extra vigilant going into our 14th general elections. Not only do we now have to worry about constituency redelineation, the Electoral Commission, voter lists, absentee voting, campaign financing, media coverage, the campaigning period and the quality of indelible ink (sigh), now we have to contend with the possibility of external parties trying to influence Malaysian voters one way or another.

Let us start with Saudi Arabia, whose foreign minister confirmed that the Saudis did deposit US$681m into our prime minister’s personal account, by coincidence, just before the 2013 elections. He said this was a genuine donation with nothing expected in return – which of course all Malaysians believe unquestioningly. It remains to be seen whether the Saudis will exhibit similar generosity this time around especially given oil prices in recent years.

Who knows, could Putin’s cyber squad be busily hacking into the private servers of Malaysian political leaders? What a treasure trove that would be if WikiLeaks gets hold of certain email exchanges.

Would Trump be inviting our prime minister for a weekend at one of his international golf courses and whispering into his ears at the third hole about scrapping the Kleptocracy Asset Recovery Initiative?

And then there is China, our new ‘best buddy’, with their submarines suddenly showing up in Malaysia on top of the mightily generous business deals clinched by the prime minister recently in his pivot away from Obama into the arms of Xi Jinping.

Myanmar is not particularly enamoured with the prime minister over the Rohingya issue and the flotilla.

Singapore (as opposed to Malaysia) keeps charging people with crimes related to 1MDB and is perhaps rather kiasu at Malaysia’s growth rate, which was more than double its own growth in 2016.

Netanyahu (if he is not convicted on corruption charges) has threatened punitive action against the countries (which include Malaysia) that sponsored the recent UN resolution against Israel.

With all these potential risks or threats, Malaysians more than ever need to pay close attention to the coming elections and watch out for any signs of interference aimed at putting someone scary in power.

Wandering Malaysian is the pseudonym of a regular reader of Aliran. 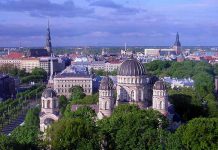 Despite three occupations and tormented past, Latvia continues to progress

Why the Makkal Osai should not be suspended

Disagree on comments on Brexit!