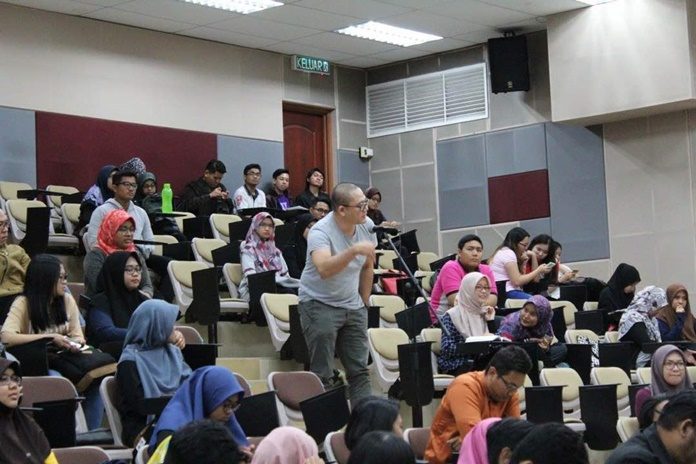 Azmil Tayeb reports on a forum that discussed concerns about the effects of secularism on morality and its compatibility with Malaysian and Islamic values.

The forum was held in a lecture hall on campus and attended by more than 150 students, comprising mostly Malays and a smattering of non-Malays curious to learn about secularism, religion and politics.

Among many Malay-Muslims in Malaysia, the term secularism typically equates to a Western import hostile to religion and, more dastardly, inimical to Islamic values that see no separation between religion and politics. The common (mis)perception is to situate the idea of secularism in a black-and-white binary context: to be religious is to reject secularism or to accept secularism means that one is not genuinely religious. There is simply no middle ground, or so it seems.

The overarching objective of the forum was two-fold: firstly, to provide a historical overview of secularism especially during the heyday of Christendom in Europe and the current political science debates on the role of religion in politics and democracy; secondly, to push the discourse on secularism beyond the lens of pro/anti-religion and reframe the topic in the context of power and social control.

At the onset I asked the audience to ponder on these two questions as they listened to my talk: One, is secularism anti-religion? Two, will secularism weaken and eliminate religious influence in the society?

In my talk I used the concept of “Twin Tolerations” by the late political scientist Alfred Stepan and the main ideas of Nader Hashemi in his book Islam, Secularism, and Liberal Democracy as the basis for discussion on how to reconcile secularism with Islamic values.

Support the struggle to build a Malaysia based on Justice, Freedom, Solidarity:
READ MORE:  A debatable Dewan Rakyat sitting

I also expanded Robert Dahl’s basic criteria for a functioning democracy, including freedom of speech, freedom of assembly, free and fair elections, and protection of individual and minority rights. These characteristics should constitute an irrevocable requirement before any kind of bargaining and negotiation between religious forces in the society and the democratic government can take place.

The concept of Twin Tolerations, which is based on an empirical study of various countries around the world, essentially states that the interaction between religious forces and the government is much more complex than the hostile/supportive binary widely presumed by the anti-secularists.

In reality, both religion and government tolerate each other to varying degrees; hence the moniker. Stepan also came up with the Twin Tolerations concept as a strong refutation to Samuel Huntington’s infamous “Clash of Civilisations” theory that erroneously claimed that Islam is not compatible with liberal democracy as practised in the West.

Nader Hashemi, who was recently invited to Malaysia by the Islamic Renaissance Front and the University of Nottingham Malaysia to give a series of talks on Islam, secularism and freedom, proposed that in order to reconcile Islamic and secular values in a democratic context, three aspects have to take place.

Second, religious politics has to be accepted as an integral part of the democratic process.

And third, reformation of Islam needs to go hand in hand with political development.

In his words, “…in developing societies where religion is a key marker of identity, in order for religious groups to reconcile themselves with secularism, a religious-based theory of secularism is required.”

My presentation went for about 30 minutes, and the next one and a half hours was reserved for questions and answers. The forum organiser purposely assigned a well-known Islamic student activist/preacher as the moderator to provide context and counter-argument from the religious perspective.

I had stressed at the beginning that this forum served to provide a deeper and fuller understanding of the concept of secularism, not an ideological battleground where there is a winner and a loser. The key objective is to establish an open space for people to discuss different ideas normally seen as verboten by the authorities in a civilised and intellectually engaging manner.

The question-and-answer session was lively and mostly filled with concerns of the effects of secularism on morality and its compatibility with Malaysian and/or Islamic values.

One particular issue that was brought up was LGBT rights. Some students were concerned that if secularism takes place in Malaysia, then society had to accept LGBT rights as normal, which to them was against their religious tenets.

Instead of engaging the LGBT question from the religious perspective, I tried to frame it in the context of citizenship rights, which provide equal protection to all citizens regardless of differences. Whether they like it or not, LGBT people are part of Malaysian society and should not be discriminated and marginalised.

When it comes to compatibility of values between LGBT and Islam, it is up to the democratic bargaining within civil society and between civil society and the government to come to a compromise, which is the essence of a functioning democracy.

In all, the forum was a big success. Many students met with me afterward to express their thanks for the open and enlightening discussion on a controversial topic. Most of the students were aware of the power play and efforts at social control behind the monolithic interpretation of secularism enforced by the religious authorities.

My parting words at the end of forum were to encourage the audience to continue having open discussions and debates on religious matters since it is the only way to beat back the attempts of the religious authorities to monopolise the values and practices of Islam in Malaysia.

The problem with using religion to discriminate against the rights of the LGBT community is that by that standard, the Abrahamic religions have many provisions that are unacceptable and could not be adopted today. The Old Testament of the Bible, for example, condones slavery. I trust we are not trying to bring that into Malaysia. So how do we pick and chose what to follow?

We are governed by the rule of law, the basis of the Constitution. According to jurisprudence, God is not a source in law.

There’s no religion in Sabah and Sarawak.