It was truly a case of Christmas coming early as for once the United States abstained instead of vetoing a resolution against Israel in the United Nations Security Council, writes Angry Malaysian.

It was such a massive gift from ‘Santa Claus’.

Although the resolution is largely symbolic (few really follow or listen to UN resolutions unless favourable to them), it was an historic moment: the staunchly pro-Israel lobby in the United States failed to stop a parting ‘gift’ from the Obama administration.

This is a ‘present’ from the Obama administration to Netanyahu, who broke diplomatic protocol when he bypassed the White House to address the US Congress directly, presumably helped by his friends in Congress.

Although incoming President Trump is already planning to be more pro-Israel and hawkish, the resolution is a small victory following the untold misery caused by Israel in the area around them.

For years, their violations of international law were masked by US veto power in the UN Security Council. Israel is now threatening to withdraw funds from the United Nations and not support those who voted against them.

This would be hilarious as Israel relies heavily on foreign aid from the United States; so what damage can it do by withholding its pittance in aid to other nations? 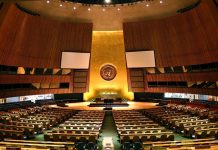 Has the UN failed us amid Covid-19?