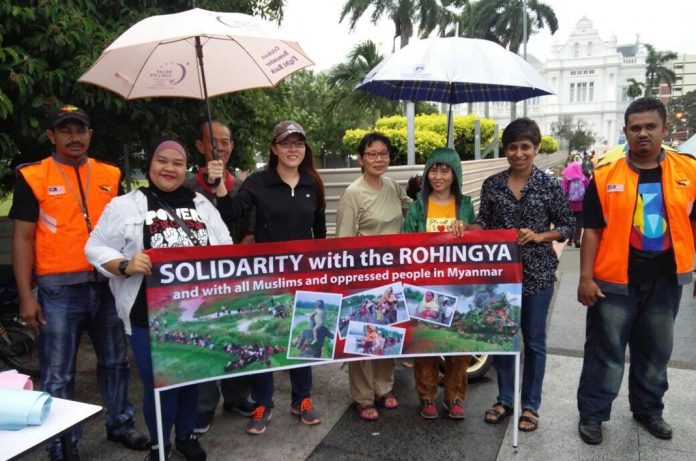 While we condemn the Myanmar government over the treatment of the Rohingya, let us also look at what is happening in our own backyard, says Prema Devaraj.

Aliran stands in solidarity with the call, both from within Malaysia and elsewhere around the world, to halt the genocide/killings of the Rohingya Muslims and other minorities in the Rakhine state of Myanmar.

We extend our support to the Rohingya community and others from the Rakhine state here in Malaysia who are agonising and helpless against the threats, terror and atrocities their families and friends in Myanmar are presently undergoing.

While it is impossible to know exact figures of people who have been killed, it might likely be in the thousands. More than a quarter of a million Rohingya refugees have flooded into Bangladesh in just two weeks, fleeing the violence in Rakhine state.

We continue to be shocked and appalled at the atrocities, which have not spared women and children. There are reports of people drowning in desperate bids to cross border rivers in makeshift boats. There are reports of massacres, the systematic torching of villages and the laying of landmines along the border between the two countries in the paths of the fleeing Rohingya.

The violence seems to have spun totally out of control, and we are witnessing genocide.

Around the world there continues to be condemnation of the violence in Rakhine state and calls to Aung San Suu Kyi to act, to protect civilians and rein in the excesses of the military.

Support the struggle to build a Malaysia based on Justice, Freedom, Solidarity:
READ MORE:  Asean urged to step up its Rakhine response

Member states of Asean as well as others in the international community need, at this point in time, to show a real understanding of a shared humanity and provide immediate and concrete support to help both Myanmar and Bangladesh handle the situation in a manner which stops the killings, provides humanitarian aid and secures a safe place and protected rights for the Rohingya.

We note the Malaysian government has pledged humanitarian assistance to the Rohingya refugees.

While we take the moral high ground and condemn the Myanmar government over the treatment of the Rohingya Muslims and other minorities in Myanmar, let us also look at what is happening in our own backyard.

What is the treatment of the Rohingya and other refugees within our country? How do we talk about a shared humanity when these people really have no rights including the right to earn a living or the right to have an education or the right to affordable health care in Malaysia? Why do we hesitate to sign the United Nations 1951 Refugee Convention?

The situation facing the Rohingya in Myanmar is full of past history and complexities of who came from where and when and who did what to whom. But it should serve as a stark reminder to our leaders, to all of us, of what can happen when religion, ethnicity and nationalism are politicised, when rights are denied and the seeds of hatred and intolerance are sown.

No one is born hating another person because of the colour of his skin, or his background, or his religion. People must learn to hate, and if they can learn to hate, they can be taught to love, for love comes more naturally to the human heart than its opposite. – Nelson Mandela

While we call for an end to the violence and suffering affecting the Rohingya Muslims and other minorities in Myanmar, let us all work and act in a manner that spreads the message of peace, compassion, respect and understanding among fellow human beings.

Prema delivered the above remarks at the gathering in solidarity with the Rohingya organised by Aliran and Penang Stop Human Trafficking Campaign at Speakers’ Square on 10 September 2017.

You should be supporting all the victims of Rakhine State, not just Muslims. According to reports many Buddhists & Hindus suffered too. Don’t fall into the trap of pitting one religion against another.

Nothing justifies any kind of systematic genocide.

Do u understand the word ‘insurgent’?