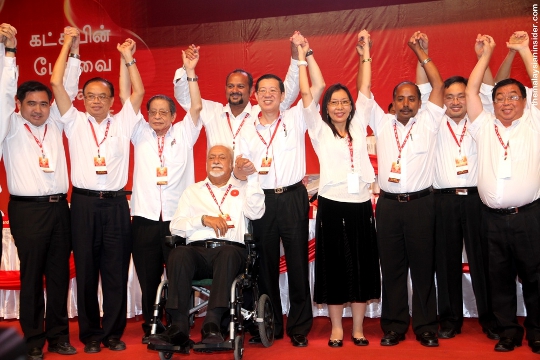 The Registrar of Societies is perceived to be joining forces with the BN to frustrate and undermine the political parties from the opposition and deny the voters their right of choice, says P Ramakrishnan.

The Registrar of Societies (RoS) is at it again!

Just before the last general election, the RoS issued a letter freezing the posts of all elected DAP leaders. This sudden turn of events very unfairly rendered the DAP secretary general incapable of issuing letters authorising selected DAP candidates to stand on the DAP platform using the party symbol.

This letter was subsequently withdrawn at the last moment because of public outrage..

Now, four years later, just before the coming general election, the RoS is using the same strategy to undermine the DAP and cripple it as a political force. There is no other explanation for his sudden action. Did the registrar suddenly wake up from his hibernation!

An issue that should have been settled four years ago has been allowed to remain dormant deliberately so that the RoS could threaten the DAP once again and render it incapable of mounting an effective political challenge to the Barisan Nasional.

If the election of the party’s central executive committee was wrong in 2013, why was action not taken there and then? Why permit the leaders who were elected then to function legitimately, as it were, for the next four years only to suddenly pull the rug from under their feet? Why create this uncertainty for an opposition party virtually on the eve of the 14th general election?

The timing of the registrar’s announcement and the manner it was announced is questionable and suspicious. First, the RoS director general visits his political master in the Ministry of Home Affairs, the Deputy Prime Minister Ahmad Zahid Hamidi. After meeting him, the director general instructs the DAP through the media to hold fresh elections.

Couldn’t the RoS director general have made this announcement on his own and independently without meeting the home minister? Thinking Malaysians may conclude that he had been instructed to follow this line of action by the home minister.

The RoS director general had announced this to the whole world when this issue concerns only the DAP. He didn’t bother to write to the DAP in the first place – which would have been the proper thing to do.

How is the DAP expected to respond in the absence of a written letter disclosing the findings arising from the so-called complaints lodged by some disgruntled DAP members following the elections conducted on 29 September 2013? That letter should have also given the details of laws and rules that have been allegedly violated by the DAP.

It is strange that Ahmad Zahid Hamidi should tell the RoS director general to act “professionally”. Instead he should have asked, “Why the hell did you take four years? Why were you sitting on your butt for so long? It is a simple, straight-forward case that should have been solved way back in 2013. Why did you drag it on for four years?”
Obviously, the home minister doesn’t see anything wrong in this long inordinate delay.

Doesn’t the RoS’ inaction constitute a dereliction of duty, a gross one at that? Shouldn’t disciplinary action be taken against the registrar for not acting for four long years? Wouldn’t that be the fate of a civil servant for failing to carry out his duties responsively and expeditiously?

Like the Electoral Commission, the RoS is perceived to be joining forces with the BN to frustrate and undermine the political parties from the opposition and deny the voters their right of choice.

This is totally unacceptable in a country pretending to be democratic since by this action, which should have taken place more than four years ago, the RoS will be seen as trying to pull the leg of the DAP in the coming general election. And we mean pulling the leg in the literal sense, not the metaphorical one!

I am sure this made the Kleptocrat … very happy & pleased