The win-lose behaviour of political parties that depend on ethnic sentiments has made it difficult to resolve the structural issues confronting poor and marginalised communities, says Ronald Benjamin.

One of the leading experts on leadership, the late Dr R Steven Covey, in his book the Seven Habits of Highly Effective People, said that it is important to have a paradigm shift rooted in the principles of effective leadership.

When these principles are broadened to the political, social and economic context of Malaysia, we see an historical evolution of the nation from being dependent on the British towards independence and finally the behaviour of interdependence among the Malays, Chinese and Indians and East Malaysian communities who worked together to built a foundation of stability, and relative harmony that we experience to this day.

Sadly, the principle and spirit of interdependence that was mooted by our nation’s founding leaders gradually eroded over the years, started during the authoritarian Mahathirian rule and has shown its ugliest head during the current Barisan National administration led by Prime Minister Najib Razak..

The consequence: a win-lose approach among the political actors from the ruling coalition and the opposition parties in dealing with critical issues facing the nation. The spirit of tribalism, partisanship and biased justice seems to dominate the political and economic discourse of the nation, rather than the common good that comes with political interdependence.

The main Malay-Muslim parties like Umno and Pas continue to play on ethno-religious sentiment for rural support. This continues to undermine social solidarity, which is rooted in the principles of interdependence of our founding leaders.

Opposition parties like the DAP, with their limited urban appeal, are unable to reach out in interdependence towards the semi-urban and rural areas voters due to a perceived lack of empathy to the fears and anxiety of conservative Malay-Muslim voters and the parties’ lack of knowledge of rural issues.

In the realm of law, the bill against unilateral religious conversions of minors was the best opportunity to project interdependent behaviour among the ruling and opposition parties. Such cooperation could have demonstrated the spirit of justice and accommodation. Unfortunately, it didn’t materialise due Umno’s attitude of dependence on the influential conservative Malay-Muslim vote bank.

Furthermore, the win-lose behaviour of political parties that depend on ethnic sentiments has made it difficult to resolve the structure confronting poor and marginalised communities.

It takes a paradigm shift in the thinking among politicians on both sides of the political divide to work towards interdependent behavior that would chart a progressive course for the nation.

While it cannot be denied there has been cooperation among certain personalities in the ruling coalition and the opposition parties on certain issues such has the abolition of the death penalty lately, it has not reached a stage of maturity on substantial issues of principle that would demand accountability, reject ethnic-based populism and partisan interests, and accept the importance of building consensus and a common understanding of the Constitution, social justice and ethnic relations.

Political interdependence is a lost national asset that needs to be found, made alive and celebrated. 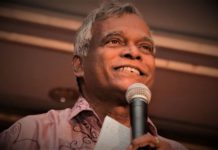 No justice for Balasunderam 10 years after brutal murder

The way forward: What’s the next phase of political development in Malaysia

“It takes a paradigm shift in the thinking among politicians on both sides of the political divide to work towards interdependent behavior that would chart a progressive course for the nation”
Benjamin, I believe this is like asking for the moon.
Umno as the big bully in BN has no interests in seeing the above take place. They are working hand in gloves with PAS to ensure the politics of race and religion, of divide and rule continues after GE14!!
Our best hope, the rakyat’s best bet for a change towards the system you are talking of, lies with the Pakatan Harapan.
Of course , the million ringgit question is whether it will deliver?
Sigh…at this point in time I am not too optimistic, the reach of PH in the rural hinterlands remain untested!!