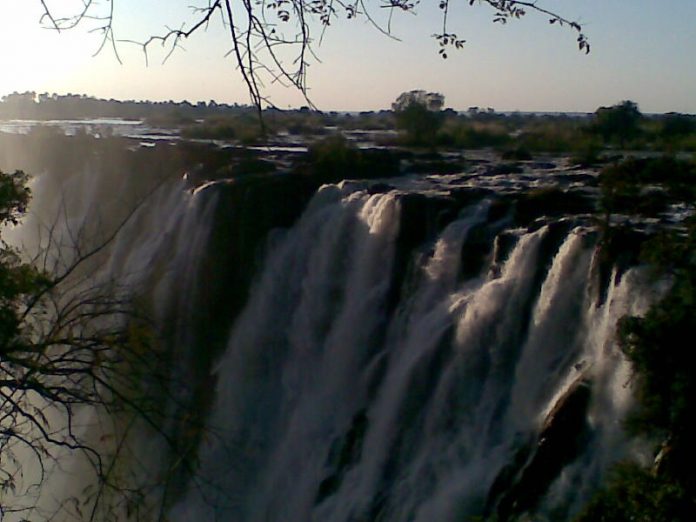 I always tell people I am a billionaire.

But no one believes me – until I produce this currency note:

Yes, a hundred billion dollars – issued by the Reserve Bank of Zimbabwe.

A friend of mine who had given me this note years ago told me he was richer than me: he promptly produced a hundred trillion dollar note (which I imagine would have been worth a few US dollars)!

[Zimbabwe later abandoned its own currency in the wake of hyperinflation and has used other foreign currencies since 2009.]

Like Laos, Zimbabwe is a landlocked country. Situated in the southern part of Africa between the Zambezi and Limpopo rivers, it is ringed by South Africa, Botswana, Zambia and Mozambique.

Prior to the name change, Zimbabwe was known as Southern Rhodesia, and later just Rhodesia, after Northern Rhodesia changed its name to Zambia, upon independence from Britain in 1964. Both countries were named after the colonialist Cecil John Rhodes.

Feeling a sense of betrayal by the British, the conservative white minority government in the south led by then Prime Minister Ian Smith unilaterally declared its independence on 11 November 1965. The country was subsequently ostracised by the international community for the next 15 years. It also signalled the beginning of the war waged by Robert Mugabe and his cohorts till independence.

Together with other nationalists like Joshua Nkomo, who was the leader and founder of the Zimbabwe African People’s Union (Zapu), Mugabe began his liberation struggle to free the country from minority rule.

Post-independence Zimbabwe witnessed a feud between Zapu and Zanu-PF, and fearing for his life, Nkomo reluctantly allowed Zapu to merge with Zanu-PF and fled the country.

Although white minority rule in then Rhodesia was abhorrent, it cannot be denied that it brought stability and prosperity to the country. For many years, Rhodesia was the bread basket of Africa and the country was rich in mineral resources – platinum, gold, diamonds and nickel.

My friend, who lived in Zimbabwe in the 1990s, told me that despite the exploitation of workers under minority rule, white farmers ensured that their African workers and their families had access to medical facilities and their children were provided with primary education.

Affirmative action was needed in the aftermath of independence, but the implementation was done indiscriminately. Farms seized from white farmers were not distributed to ordinary Zimbabweans but to Zanu-PF supporters and cronies.

Within a short span, these farms were reduced to a pitiful state and turned barren as the “new owners” had no interest, knowledge and competence in farming. Thus, began the ruinous decline of Zimbabwe’s agricultural sector.

From a nation well-known for its commercial farming, Zimbabwe became a country focused mainly on subsistence farming. And if farm workers were exploited during the era of minority rule, in post-independence Zimbabwe they were intimidated into voting for the ruling Zanu-PF party during elections.

After the seizure of farms, the whites left for neighbouring countries like Zambia and Kenya and started commercial farming there, becoming competitors to the indigenous Zimbabwean farmers. More than half the whites left Zimbabwe since the country gained independence.

Coupled with Zimbabwe’s disastrous economic policies, the country was hurtling towards an economic meltdown in the 1990s. The International Monetary Fund suspended aid to Zimbabwe in 1999, followed suit by western donors.

Zimbabwe’s economy has shrunk by more than 50% since 2000 and the country’s currency today has little value. At one time, five trillion Zimbabwean dollars was only equivalent to US$5. Even now, chronic shortages of cash are choking businesses all over the country, and people have to camp outside banks all night just to withdraw as little as $20.

With the economy in free fall, Zimbabwe’s central bank governor Gideon Gono advocated the printing of money in 2009, but this fuelled hyperinflation. Gono was not remorseful about this policy, even as the country was afflicted with disease and starvation.

Currently, more than 90% of Zimbabwe’s workforce is unemployed, and even graduates just loiter aimlessly around the streets of Harare, the nation’s capital. More than three million Zimbabweans have gone abroad to work, mainly to South Africa.

Essential food, medicines and household item are scarce. Shortages of all types of food are conspicuous, with the public confronted by empty shelves in supermarkets – an irony for a country which has abundant fertile agricultural land.

The country’s medical system is in a shambles with shortages of much-needed medicines. Nearly 70% of Zimbabweans cannot afford to seek medical treatment.

Upon learning of the passing of Ian Smith on 20 November 2007, Mugabe’s Deputy Information Minister Bright Matonga labelled him as the man who was mainly responsible for the agony of millions of Zimbabweans. Perhaps it was true, but in the same breadth, those words are also pertinent for Robert Mugabe.

Mugabe’s biggest blunder was when he sacked his Vice President, Emmerson Mnangagwa, with the intention of installing his wife Grace as his heir apparent. This sparked the beginning of his downfall.

The dismissal of Mnangagwa, who initially fled to South Africa, only to strategise and subsequently return, led to the intervention of the military – a move which pressured Mugabe into finally resigning.

There is a silver lining, though. It is heartening to note the restraint displayed by the military, police, MPs, Zanu-PF party officials and the people in their adherence to the constitution and rule of law by not arbitrarily grabbing power.

It definitely augurs well for the future Zimbabwe if the normal process of law is observed in the days to come: the nation has a chance to display much needed political maturity at this time. Hopefully, the relative restraint shown so far will be a sign of better days ahead, a chance for the nation to recapture its past glory as a beacon of economic success in Africa.

Zimbabweans deserve a better deal after years of poverty and extreme hardship.

Lessons to be learned from Zimbabwe:

As Samuel Johnson once said, “Patriotism is the last refuge of the scoundrel.”