All those in police custody, be they adult or children, irrespective of whether they have committed a crime or not, have rights which have to be protected, asserts Prema Devaraj.

All children (anyone below 18 years of age) have rights including those who are in conflict with the law.

A chain remand begins when a person is rearrested immediately after being released from remand.  A rearrest is legally allowed for an investigation into:

In the case of Kanapathy and Kian Kok, they were rearrested more than once. While the law does allow this, questions have to be raised:

Furthermore, both boys apparently reported police brutality to their parents and to the presiding magistrate.

It is alleged that two magistrates refused an extension of remand in two instances due to the injuries on the boys.

This is hugely worrying. We have to ask ourselves what actually happened to both these boys while in police custody? What was the nature of the charges against the boys which allowed for their rearrests?

Malaysia is a signatory to the United Nations Convention of the Rights of the Child (CRC), and in all actions concerning children by public or private institutions, courts of law, administrative bodies, the best interests of the child is a primary consideration. This also holds true for children who are, for whatever reason, in conflict with the law.

While the government may still have reservations on Article 37 of the CRC, which also requires the government to ensure that “no child shall be subjected to torture or other cruel, inhuman or degrading treatment or punishment”, Article 19 requires the government to “take all appropriate legislative, administrative, social and educational measures to protect the child from all forms of physical or mental violence, injury or abuse, neglect or negligent treatment, maltreatment or exploitation, including sexual abuse, while in the care of parent(s), legal guardian(s) or any other person who has the care of the child”.

In the case of Kanapathy and Kian Kok, being under police remand has placed the responsibility of ensuring their care and wellbeing with the police. One is pressed to ask how the police have ensured the care and wellbeing of both these boys given the occurrence of chain remand and allegations of brutality.

While a call has been made by Suaram to Suhakam and the Enforcement Agency Integrity Commission to investigate this matter and bring errant police officers to account for their actions, other agencies or ministries also need to look into how the rights of children who may be in conflict with the law can be better protected when they enter the criminal justice system.

Working together with Unicef, the Ministry of Women, Family and Community Development (MWFCD) published The Malaysian Juvenile Justice System: The Study of Mechanisms in Handling Children in Conflict with the Law in 2013.

The executive summary states among other things that “the significant number of children who are held on remand for very minor offences is cause for concern, as is the consistently high percentage of children in prisons who have not yet been found guilty of a crime”.

Among the many recommendations in this study is the amendment of the Child Act to include, among other things, “more detailed procedures regulating arrest and police custody of children; allow bail in all cases, depending on the background and circumstances of the child and nature and circumstances of the case; introduce a broader range of alternatives to remand and provide guidance on the factors to be taken into account when making decisions about pre-trial release.”

Many of the recommendations suggested in the study, if implemented, would improve the protection and handling of children in conflict with the law.

It is imperative that the MWFCD work with the Ministry of Home Affairs to ensure that law enforcers understand the rights of children who, for whatever reason, are in conflict with the law and implement standards of good practice which protect these rights.

Magistrates are also very important to child protection because they are in a position to help the children they see in court. It is the magistrate who will decide on whether or not there is really a need for remand. The use of remand on children is something which really should only be a last measure resort.

All those in police custody, be they adult or children, irrespective of whether they have committed a crime or not, have rights which have to be protected, bearing in mind that children are more vulnerable than adults. Allegations of abuse, in this case against children, must be thoroughly investigated and if found true, then action against errant police personnel must be taken.

Inaction against such abuse will only allow it to continue, thus endangering the wellbeing of other children who are taken into custody. It will be a mockery of our government’s stand on child rights and the commitment given to act in the best interests of children.

Statelessness should not prevent children from receiving formal education 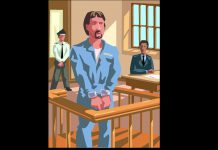