We have a national leadership that is using divisive issues to cling on to political power, but after 60 years, it is time to move on to a needs-based economic policy, writes Mt Elvira.

The fragile state of racial unity in our country comes to mind as I watch Remember the Titans – a movie about how a white and black high school football team is combined and how they overcome the racial tensions of those times to become state champions.

True, we are in a much better state than the race relations of the 1970s in Virginia on which the movie is based. We have not heard of any food outlets in our country that refuse to serve a customer of a different race as happened in a bar that refused to serve blacks in that movie.

But this is the frightening part: we seem to be moving in that direction. As I watch those feel-good documentaries on television as we celebrate 60 years of independence for the Peninsula (and 54 years since the formation of Malaysia) in juxtaposition to the reality on the ground, I can’t help feeling a foreboding sense of gloom.

We had cups in a primary school water dispenser segregated based on religion. We had a supermarket designating halal trolleys and non-halal trolleys. We had rakyat denied government services because their attire was deemed unsuitable. We now have a hotel that refuses to refrigerate the milk of a mother for fear it is not halal.

All these are symptoms of a society on the path towards being segregated. Sure, all these actions were not institutionalised; yet, it is the government of the day that is the driving force behind the Islamisation of our country. Would it be a far jump of the imagination to have a zealot or extremist declare non-Muslims persona non grata in an establishment?

The policies in force since the 1970s also play a great part in the segregation in our country. Bumiputeras and non-bumiputeras became not only a matter of policy implementation but also a source of the current state of racial unity in our country.

We may not yet have a business outlet refusing other rakyat based on their race – but if we look at the government’s policy in the award of Public Services Department (JPA) scholarships, how far is it from that? Look at the discounts given to bumiputras for new houses purchase – it matters not if they are multi-millionaires.

How can there not be a sense of resentment and a feeling of us versus them?

Don’t get me wrong – I was and still am a supporter of the New Economic Policy in the spirit it was formulated. But after 60 years, it is time to move on to a needs-based policy. As long as that policy is not corrected in how it is implemented, we will continue to have this segregation by default.

Admittedly, the state of our nation’s unity may not be a very valid comparison with events in Remember the Titans. After all, the movie was just about an American high school football team. Yet, it shows that if there is strong leadership and a common destiny to bind us, cohesion can be achieved.

This then is the curse faced by the rakyat at the moment. We have a national leadership that is using race and religion to divide and rule the rakyat, to cling on to political power.

In the show, Bill Yoast, the assistant coach, a white American rises above self-interest and the promise of personal gain to do what is right and honourable – to the extent of directly confronting the match referee for being biased.

In our country, at this critical point in our nation’s history, we have bumiputras like Rafizi Ramli, Mariam Mokhtar and Fa Abdul also willing to stand up for what is right and just. But are there enough rakyat in the rural hinterlands to see the need for change?

In Remember the Titans, because of Yoast’s sacrifice and the right strategy used, the Titans grab victory from the jaws of defeat to become state champions.

Having the right strategy is the critical issue in the coming general election. At it stands, the PKR is coming apart at its seams because of Azmin Ali’s continued courting of Pas – apparently with the blessings of party president Wan Azizah (and I suppose, by default, Anwar)?

Just when Pakatan Harapan had put up a semblance of coming together as a cohesive coalition against the Umnoputras, we have Pas driving a wedge in even before the general election is called. Azmin may have his political survival to contend with, but the greater good should outweigh the need of the individual.

There are none so blind as those who will not see. It is obvious Pas is in cahoots with Umno to play spoiler in the coming general election. The sooner Pakatan Harapan deals with this and draws up strategies to counter this, the better.

Mt Elvira is the pseudonym of a regular reader of Aliran. 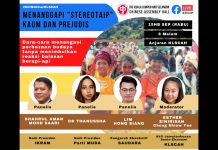