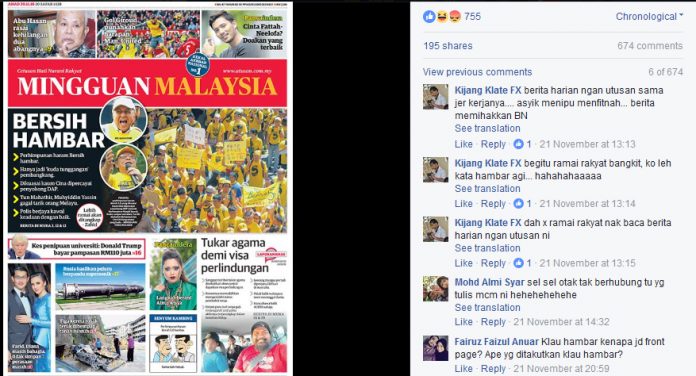 Anil Netto looks at a few telling indicators that suggest why the party cannot take its traditional support base for granted.

If we were to study the images of Umno Baru president Najib Razak and Pas president Hadi Awang together at the rally for the Rohingyas, we may discern signs of a budding alliance between their two parties.

Both parties appear to be building bonds in the hope that they can win a majority of the Muslim votes. They now appear to be banking on religious sentiments arising from issues such as Hadi’s bill and support for the hitherto neglected Rohingya community.

But this apparent alliance, rather than indicating that Umno and Pas are now operating from a position of strength, could simply be a reaction to shifting sentiment on the ground arising from a variety of factors. Think of the higher cost of living, compounded by GST; the burgeoning numbers of unemployed graduates and diploma holders; the weakening ringgit, arising from a loss of confidence in the leadership; and a growing realisation of the scale of the corruption in our midst, highlighted by the 1MDB scandal.

In recent weeks, there were three tell-tale signs that suggest Malay support for Umno could be ebbing.

Sure, the turnout for Bersih 5 on 19 November was lower – which was understandable given the fear of violence that the red shirts brought about, the arrests on the eve of the rally, and the obstacles put in the way of the yellow shirts. By the time many arrived at KLCC – and some were still on the way – the rally was already over by 5.30pm as rain began to fall.

Support the struggle to build a Malaysia based on Justice, Freedom, Solidarity:
READ MORE:  Malaysia’s political turnaround: Some hard questions

Close to 100,000 turned up for the rally – much lower than at Bersih 4 on 29-30 August 2015, when the crowd was several times larger. Despite the lower turnout at Bersih 5, many more – probably more than during Bersih 4 – followed the event online or over their smartphones, viewing updates, photos and videos via messaging apps.

But a comparison of the composition of the crowds at Bersih 4 and 5 is what is more interesting.

At Bersih 4, the Malay turnout, in the absence of Pas supporters who had turned up in full force previously, appeared to be only 5 per cent.

But by Bersih 5, the Malay turnout had risen noticeably to about 25 per cent (just a guesstimate). That’s about a five-fold increase. Most of the purple-shirt volunteer security marshals were also Malays. Indeed, Pas’ purple-shirt Unit Amal personnel, who had provided security for Bersih rallies until Bersih 3, were not missed.

A similar higher Malay turnout was also evident during the “Women for Maria” march from Padang Merbok to Parliament on 24 November.

Perhaps this explains why Umno and the red shirts felt so jittery about the Bersih convoys especially as they wound their way into semi-urban and rural areas in the weeks leading up to Bersih 5.

So, it would appear that Bersih did make some headway among the Malays in some of these areas. Also, civil society groups could have reached even more Malays through the increased use of the Malay language in conveying the Bersih 5 message, aided by the greater penetration offered by messaging apps.

Sign no. 2 – Where were the rest of the red shirts?

The Himpunan Merah red-shirt rally on 16 September 2015 (#Merah169), just two weeks after Bersih 4, drew some 50,000 red shirts, according to one reported police estimate. Well, okay, maybe it was only 30,000 – and many of these red shirts were also believed to have come from Felda settlements. See the video from last year below:

But at the Bersih 5 red-shirt counter-rally on 19 November 2016, one police personnel estimated that only about 2,000 to 3,000 red shirts had turned up, many of them young lads, many of them wearing masks.

That made the the yellow shirts wonder who these masked guys really were. “Buka topeng!” the Bersih 5 supporters chanted as a line of red shirts waded into the sea of yellow.

So what happened to the rest of the red shirts who turned up last year?

Sign no. 3 – Utusan gets flak for ‘Bersih hambar’ report

Another sign of this apparently ebbing support for Umno (and its apparatus) among ethnic Malays manifested itself when the Umno-owned Utusan Malaysia published a front-page report on Bersih 5, the day after the rally.

Titled ‘Bersih hambar’, the report denigrated the event, among other things, pointing out that Dr Mahathir and ousted Umno deputy president Muhyiddin had failed to draw Malay support for Bersih.

An image of this front page of Utusan was pasted on Utusan’s Facebook page, which has 1.7m ‘likes’ or followers. Now, you would have thought that the Utusan faithful would have welcomed the report in the Facebook comments below.

But what followed was remarkable: an overwhelmingly angry response from 674 commenters, presumably many of them Utusan Facebook followers.

If this is the response among those following the Utusan Facebook page – and I don’t know many who can stomach the paper’s reports – then it would suggest that Umno has something to worry about. It would also put Umno’s almost desperate rapproachment with Pas in a clearer light.