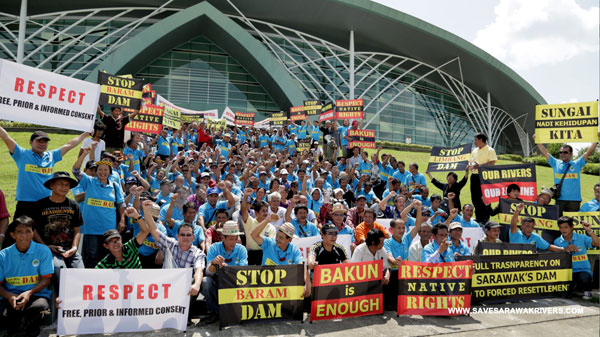 A big BN win in this Sarawak state election will send the wrong message to Najib and his cohorts in Putrajaya that the rakyat is OK with their shenanigans, writes Damian Denis.

The Sarawak state elections is fixed for 7 May 2016.

VIPs from the peninsula have been making their rounds into the interior of Sarawak – an activity which you don’t normally see on other days. And it is interesting that Sarawak is the only state that still holds its elections on its own. But will the people really vote on their own for change or fall back to the status quo?

I believe BN still holds the fort in Sarawak – just like before. But what many Malaysians are hoping for is that the opposition will perform better than the last time. They need to achieve that in terms of the number of seats won and the popular vote. What is at stake for Sarawak and for the rest of Malaysia if BN wins handsomely this time around?

There are several questionable activities that have been going on under Najib’s watch and under the previous Sarawak chief minister’s – but much has been swept under the carpet.

First, let us not forget Taib Mahmud, the longest-serving state chief minister in Malaysia (1981-2014). He is famously known as the last White-haired Rajah in reference to the British Brooke family who ruled Sarawak before Independence.

Taib and his family have been regularly accused of corruption, and his family-owned companies have benefited from the exploitation of Sarawak’s rich natural and economic resources.

His tenure in power was tarnished by the acquisition or confiscation of native customary land – often with paltry compensation.

But Putrajaya appointed him governor of Sarawak in 2012. What sort of leader do we have at the top? Are Sarawakians just going to let him go away quietly or will they stand up and make a difference this time around?

Secondly, Sarawakians should not be fooled by Adenan Satem’s rhetoric of defending the indigenous and minority groups which have been marginalised. Many Sarawakians have been deprived of a better life.

Although the Dayaks are the largest indigenous group, many of them have not prospered, to say the least. Instead, the Dayaks are not recognised in their own right and fall under the category of ‘others’ or ‘lain-lain’.

If we remember, Abdullah Badawi used almost the same rhetoric to gain an upper hand in the 11th general election in which he won 90 per cent of parliamentary seats. The same tactics are being employed now to give a mandate to Adenan Satem to rule resource-rich Sarawak.

But what all of us should be wary of is whether Adenan has the power to fulfil his election pledges to the people without any interference from outsiders. I doubt he has the political will to do so, and it could well be back to the status quo for Sarawakians. They must rise and deliver a shock result against the BN as a whole and send the correct message to him that enough is enough!

What other means do we have to ensure the interests of Sarawakians are protected? Sarawakians should deny Adenan and Najib from ruling over them in 2016  and the faster this is achieved, the better it will be for all Sarawakians.

Thirdly, the Najib administration has been making money at the expense of the rakyat through the GST, toll and utility tariff hikes. Then there are the controversies surrounding KWAP and Tabung Haji. The rakyat is being sucked dry at every turn and the only way to put a stop to this is to send a message through the state election.

Najib has shown what he can do with 1MDB. Just imagine if there was a similar company in Sarawak. The PAC report has highlighted the mismanagement and poor controls in 1MDB.

A big BN win in this state election will send the wrong message to Najib and his cohorts in Putrajaya that the rakyat is OK with their shenanigans.

There are many voices attempting to use the spectre of Umno entering Sarawak as a scare tactic to win this election. What is the difference between what Umno has done from the time of Dr Mahathir and what Taib Mahmud has done to Sarawakians in the past? Sarawakians have lost much of what is rightfully theirs.

Those in power do not seem to represent the aspirations of the very people they are supposed to act for and protect. Do you think Adenan Satem will bow to the needs of his people or will he kowtow to Putrajaya first?

I always ask my East Malaysian friends what happened to their petroleum wealth. Two long bridges have been built in Penang alone and so too many other highways across the peninsula. But only now has the BN government opened its eyes to the need for a Pan-Borneo highway?

You will be shortchanged if you allow such politicians to rule over you for another five years. Don’t give them that luxury.

I hope that the change we envision for the whole of Malaysia can start from the great Land of the Hornbills. This is your moment to make that change. The only person that can stop you from making that change is YOU yourself!

Sarawakians, can we count on YOU?