The Bersih leaders have brought hope to Malaysians, but this should be a catalyst for real alternatives to emerge from a diverse leadership from the grassroots, says Ronald Benjamin.

At the latest Bersih rally thousands of Malaysians poured out into the streets to demand a clean and accountable government even though the inner objectives may vary among a diverse population.

The plus point from this rally was that different segments of civil society leadership, collaborated to make the event successful and to proclaim truth to the Barisan National leadership on the universal principles of good governance.

While this endeavour shows there is strength in civil society, helmed by educated elites with a concrete agenda, what is missing in the nation’s political, economic and social narrative is leadership that represents a diverse spectrum of Malaysians on substantive issues related to the environment, local government, peasants and workers.

These areas have been viewed as areas of budget allocation rather than areas that require structural change that comes from diverse leadership initiatives. It sad that we are yet to have popular a multi-ethnic movement that voices concern in these areas.

The critical challenge that is facing Malaysia today is a deficit of leadership from diverse backgrounds.

In certain developed and developing nations, leadership emerges from local government and thus, it has experience in local community issues.

There is also environmental leadership that brings different perspectives of how resources should be used without damaging the ecosystems. Leaders also emerge from workers and peasant movements. For example I was amazed watching a documentary about environmentally friendly leaders initiating organic farming in Bhutan, where the use of harmful chemicals such as pesticides are forbidden.

The current president of the Philippines, Durterte, who has brought about a significant change in his country’s foreign policy, was a local government mayor of the city Davao, which is part of Mindanau. His experience in the grassroots has made him more sympathetic to the cause of workers; so he has made the abolition of contractual labor as his major policy since coming to power.

In certain developed nations like Norway, there were red-green coalitions of the labour party, socialist-left party and centre party concerned about the environment that governed Norway as a majority government from the 2005 general election until 2013.

It is obvious that a diversified political or civil movement brings different perspectives that would enrich the political consciousness of Malaysians. Sad to say in Malaysia, we have tired faces of veteran leaders from the Barisan Nasional and the opposition who still call the shots in Parliament.

The reason is obvious: we are an elite-driven democracy in the flavor of ethno-religiosity or so-called liberal leaders who are autocratic in their parties but put up a democratic image to the public, made worse by personality driven politics. This has basically suppressed the development of a diverse leadership which is critical if Malaysia is to achieve so-called developed nation status.

The issues that face humanity are common, but in Malaysia our mainstream politicians are engrossed in Malay, Chinese and Indian issues, besides Islamisation that seems largely devoid of principles of good governance.

The Bersih leaders have brought hope to Malaysians, but this should be a catalyst for a comprehensive change that would only come about when real alternatives emerge from a diverse leadership from the grassroots.

In a time of crises, leaders behave like five-year-olds! 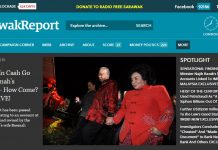 Crass materialism is not the sign of good leadership