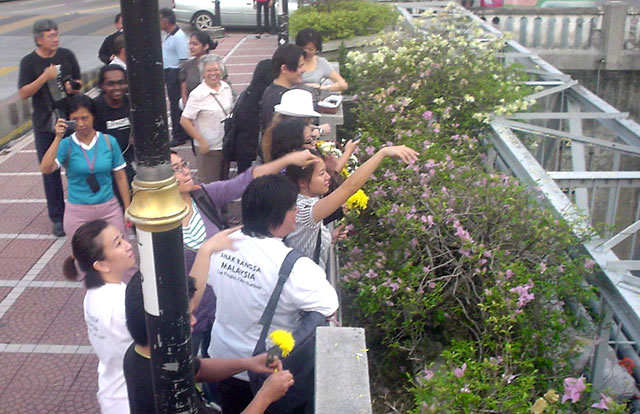 According to a media report “Smart system for police lock-ups”, Malaysia’s lock ups are going to have a Self-Monitoring Analytics Reporting Technology (Smart) system to monitor suspicious behaviour by inmates.

The system works “by recognising unusual movement and behaviour such as loitering, climbing, vandalism, suicidal tendencies and fighting”. Via a 3D marker, it pinpoints the incident area and alerts the prison authorities.
Apparently, this system was developed as a way to curb incidents like deaths in custody.

The report states that Smart was developed by Mimos (the national applied research and development centre for information and communications technology) in collaboration with the police and Suhakam. It cost RM1m to develop and RM3.5m to install. Having been piloted in the Jinjang Central Lock-Up, Smart has apparently been installed in 57 other major facilities in the country.

While efforts to reduce custodial deaths are welcome, there are a number of concerns.

Firstly, custodial deaths are occurring not merely because of inmate fighting, suicidal tendencies or illnesses. Custodial deaths have also occurred because people have been brutally assaulted while in detention. The case of 22-year-old A Kugan, who was detained by the police on 15 January 2009 for alleged car theft but died while in custody five days later, is just but one example.

Custodial deaths have long been highlighted by civil society groups including Suaram, Aliran and Lawyers for Liberty as well as Suhakam and the Bar Council. It would seem that the Smart system should be monitoring the movements and behaviour of not only the inmates but also the personnel involved in the arrests, interrogation and the care of detainees i.e. the law enforcement officers.

Support the struggle to build a Malaysia based on Justice, Freedom, Solidarity:
READ MORE:  Court win for custodial death case

Currently, it would seem that making perpetrators accountable or getting justice for victims of custodial deaths (and their families) is immensely difficult.

In the case of A Kugan, it took six years after his death before a former police constable was finally made to serve his three-year jail sentence for his role in ‘causing hurt’ to Kugan.

In a civil suit against the parties held responsible for Kugan’s death (i.e. the police, the government and a police constable), his family was awarded RM801,700 in damages by the High Court on 2013.

In 2014, the Court of Appeal upheld the decision that the government and the police were responsible for Kugan’s death but reduced the sum of the award to RM701,700.

But in August 2015, the Federal Court granted leave to the government to appeal against this award. How much longer will this process take?

More recently, the Enforcement Agency Integrity Commission (EAIC) found that the death of 25-year-old Syed Mohd Azlan in November 2014 was connected with the use of physical force by the police who arrested and questioned him.

In its statement released in October 2015, the EAIC found a serious breach of the police standard operating procedures (e.g. on arrests and handling of suspects as well as on discovery and seizure). The EAIC also noted abetment of a criminal nature by the arresting officers in physically brutalising Syed Mohd Azlan which resulted in his injury and death.

The EAIC found not only the police culpable in a man’s death but also the occurrence of severe breaches in police protocol and attempts to cover up the wrongdoing. It is unclear whether anyone has been charged since the EAIC released their statement.

More than 10 years ago, the Royal Commission to Enhance the Operations and Management of the Royal Malaysian Police found that, between 2000 and 2004, there were 80 deaths in police custody, of which only 39 cases were referred to the magistrate for inquiry, and only in six cases were inquests conducted.

Have things really changed since then? Has the setting up of coroner’s courts shown an increase in investigations into custodial deaths? How exactly are perpetrators of custodial deaths being held accountable for their actions?

Thirdly, over the years, various recommendations have been made to reduce custodial deaths including a long list by the EAIC in its statements pertaining to James Ramesh a/l Ramasamy and Syed Mohd Azlan.

These include requiring a medical officer to carry out a medical examination on a detainee when first detained at the lock-up, improving SOPs on arrests and interrogation, training for all levels of officers to ensure SOPs are followed during arrests and investigation, and stopping the use of non-standard issue equipment during arrests .

Fourthly, crucial to being able to evaluate whether custodial deaths have decreased, there must first be systematic and detailed documentation of such deaths.

For each state in the country, we should be able to know the number of arrests per year, the number of custodial deaths per year, where they occur (whether in police lock-ups or immigration detention centres or prisons), the causes of death (whether illness, suicide, assault) and so on.

All this data should be critically analysed so that custodial deaths in the country can be comprehensively understood and monitored. Such data would also allow an evaluation of the effectiveness of the approaches used to reduce custodial deaths.

Moreover, such information should be made public so that a claim of accountability over reducing custodial deaths can be upheld by the police and the home ministry.