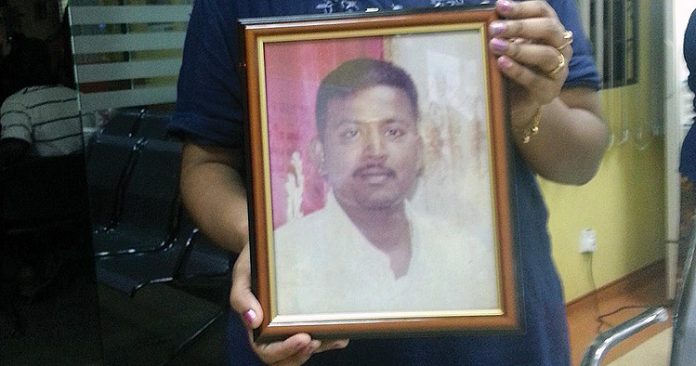 Prema Devaraj looks at the shocking circumstances surrounding the death of N Dharmendran that were highlighted in an EAIC report.

It is a chilling read, giving an awful picture of what happened in this particular case of a death in custody and laying bare the litany of sins perpetrated by some in the police force against a Malaysian citizen.

From the evidence, the EAIC has confirmed that Dharmendran died in police custody due to the use of physical force by the police. He had been beaten and tortured, suffering 52 bruises on his body, while in custody. Two staples were embedded in his ears, inserted while he was still alive.

The findings point to several police personnel including senior police officers being involved, not least in a conspiracy to cover up police responsibility for his death. This is completely unacceptable and the perpetrators must be held accountable for their actions.

The report details the extensive violations of existing rules and regulations that characterised this case, including:

Support the struggle to build a Malaysia based on Justice, Freedom, Solidarity:
READ MORE:  CCTV, bodycam recordings would shed light on custodial deaths

The lack of integrity, respect or even knowledge of rules and procedures shown by certain police personnel is shocking and has to be dealt with by the authorities if we are to have any confidence in the system.

Dharmendran’s death in custody is not an isolated incident. It is yet another example which leaves Malaysians wondering about what really goes on in lockups or interrogation sessions during remand. Malaysians cannot be blamed if we are asking why rules and regulations are not adhered to and why some police officers can apparently behave like thugs and not be brought to justice.

We should have a police force which we are proud of, not one which leaves us shaking our heads in despair. The current situation and public perception about the police force does a great injustice to the police officers who work hard and are themselves law abiding.

The home ministry must work with the Royal Malaysian Police to reign in rogue police officers. These police officers must be investigated, charged, convicted and imprisoned if we are to see an end to deaths in police custody.

Strong recommendations have been made by the EAIC concerning the treatment of detainees, facilities in lockups and the need for police training and adherence to standard operating procedures – not only in Dharmendran’s case but also in their investigations into other deaths in custody. It is high time the home ministry take stock of these recommendations and ensure their implementation.

As a sign of a commitment towards ending deaths in custody, be they in police lockups, detention centres or prisons, the Malaysian government would do well to also ratify the United Nations Convention against Torture and Other Cruel, Inhuman or Degrading Treatment or Punishment (UNCAT).

READ MORE:  Is it indifference or a sense of arrogance that enables us to abuse others?

This treaty outlines specific measures for governments to take in order to prevent any form of torture or cruel, inhuman or degrading treatment within its borders.

It is obvious that the government needs some heavy prodding to move in this direction – to change the present culture in the police force where some police officers can act with chilling impunity. This culture has to be challenged if we are to provide the basic right to protection for all and bring an end to deaths in police custody.

It has been a practice in Malaysia that if you are remanded in police lock-ups, you are considered a criminal. Guilty until proven innocent. You will be stripped leaving your under pants and forced to sleep on the cement floor full of bugs.
For robberies suspects, in the midfdle of the night, you will be dragged out of your cell to face the interogating officer where you will be [allegedly] tortured for confession.
When the DPP applied to the magistrate for remand order, you are not represented at all.