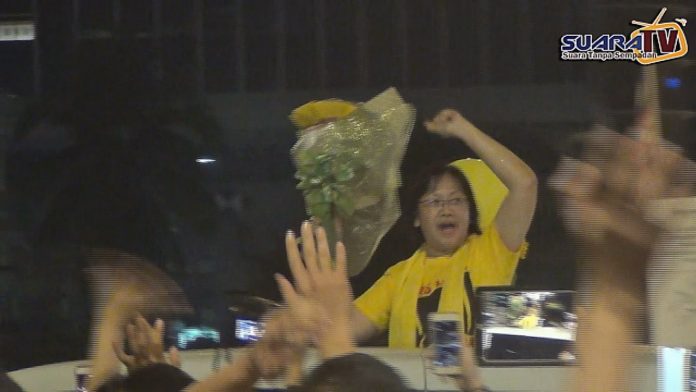 Did they want to show Umno delegates that the government was fully in control and anyone who challenged it would be severely dealt with, wonders An Observer.

Fair-minded Malaysians with a conscience will be happy and relieved that Maria Chin has been finally released from her nightmare.

Hopefully, it will stay that way although the authorities have indicated she may be arrested under the Peaceful Assembly Act.

That is puzzling as she did not take part in any assembly as she was already under arrest then. Puzzling indeed, unless this charge under the Peaceful Assembly Act charge is for Maria turning up after her release to thank her supporters attending a scheduled vigil for her.

Many are wondering why the authorities came down so hard on Bersih this time around compared to earlier rallies – especially when this 2016 rally was always going to draw a smaller turnout than before.

Then dawned the realisation why: this was a show of force for the Umno delegates who were in town that the government was fully in control and anyone who challenged it would be severely dealt with  under the ambit of existing laws. That must be the main reason why so many raids and arrests took place even though the rally was quite peaceful.

Bersih poses no threat to the incumbent leaders, so say all the government ministers and the array of government supporters. So why take a sledgehammer to crack Bersih; just ignoring it would have taken all the publicity away.

Prime Minister Najib may have explained it better when he said that no one is scared of Dr Mahathir anymore as he does not control anything anymore. Looked at another way, does this imply that everyone should be scared of the current prime minister as he controls everything now?

Coming back to the accusation that Maria Chin has CIA links – for argument’s sake, even if it is true – may I ask what is wrong with that? After all, our government is ‘pally-pally’ with the outgoing president of the United States and the incoming president.

As the CIA is an official agency of the US government, why do we vilify any link with it? Does anyone else not see how ridiculous this aversion is?

Regardless, Maria and her lawyer have dismissed the link, and therefore it would be good if she could sue those who made this allegation as that would be the only way to stop people from simply playing to the gallery.

A serious question on this topic arises: the person who made this allegation does not hold any government or security services-related position. So how did he get this information, if at all it is true, and why did he make the accusation, if it is not true?

An Observer is a casual follower of the nonstop shenanigans and games played out in the public sphere and at times can’t stop the urge to write and join in the merriment.