A tussle for control, which is skewed towards the BN-led federal government, continues to plague the administration of Penang, observes Yasmin Bathamanathan.

Up until a few years ago, I never realised that there was a distinction between the federal government in Putrajaya and the state government in Penang. To me they were the same – two sides of a coin that were identical, a trick coin that no matter how many times we flipped, we ended up with the same choice.

This fear that I had of the same old result was shattered in 2008. The people of Penang had voted and we were getting a brand-spanking-new government!

As a bright-eyed young Malaysian, I was in awe. Hey, voting does matter and each vote counts! Perhaps this new government would make things in Penang better – better schools, hospitals, and roads. The sky was the limit and Pakatan Rakyat was here to bring us the future.

Alas, in our centralised federal system, the state and local governments have a limited say in the administration of the state, and the future has looked murky again.

Malaysia, a federation of 13 states and three federal territories, practises centralised federalism. The central federal government holds the main axis of power with the state governments given control over smaller areas. This means the bulk of your tax money goes to Putrajaya, matters of law and security are policed and regulated by our menteri and their kakis, and what your children learn at school is subject to the mood in the capital.

Imagine my horror when I found out that something as basic as the routing of public transport falls under the purview of the federal government! Shout all you want for buses to ply the route to your housing area – unless Putrajaya hears your cries, all you can do is wait in frustration.

Perhaps centralised federalism would be okay if it was different from the current system we have in Malaysia. After close to six decades of political monopoly by a single party, our bureaucracy has conflated itself with the party that has ruled the nation without a break, instead of being independent of politics.

So what happens in such a system where one party controls the federal government and federal-level opposition parties control a few state governments? An insane amount of power struggle, for a start.

When the PR took over Penang, BN-aligned bureaucrats scrambled to shut access to the new ‘invaders’. Barred from accessing some of the federal machinery, the Penang state government resorted to creating its own agencies to continue the work that the BN-choked offices refused to do.

What’s more, funding for some of the public programmes that would normally have been channelled through the state arm was blocked. I myself worked at one of the newer agencies that the Penang state government had to create to fill the void left behind.

Representatives and officials of the PR-led Penang state government even experienced restrictions on their access to public schools, which fall under the purview of the federal government. For instance, no officials or state representatives from PR are allowed to give speeches in public school events – nor can they hold any programme or activity targeted at public school students on school grounds. Like everything else in Malaysia, the education system is also politicised – but I do not need to tell you that.

Given the limited autonomy of state governments (once again, thanks to centralised federalism), the struggle to bring about the change that the people so rightfully voted for has shown up the cracks in the Malaysian political system.

This tussle for control and autonomy, which is skewed towards the BN-led federal government, continues to plague the administration of Penang. Perhaps we could work towards removing the murkiness clouding the future by making our votes count.

Yasmin Bathamanathan works in a government agency where good governance forms the basis of its work.

She recently attended the Aliran Young Writers Workshop on Good Governance and Democracy and our second workshop on Federalism and Decentralisation, both supported by the Canada Fund for Local Initiatives.

Of her experience at the first workshop, she shares: “The Aliran Young Writers Workshop has helped me to critically look at some of these issues that I have been troubled about for some time by providing guidelines and a safe space to explore, analyse and critique them through the good governance lens.” 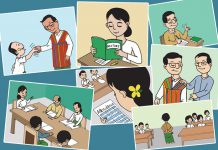 Is Zuraida overstepping her ministry’s role and abusing her position?