“Civil society also plays a role… Everybody needs to play a role,” said the Malaysian Anti-Corruption Commission representative, as he faced prickly questions from a critical and unconvinced crowd. This was the second open forum on public integrity I attended where verbal blows were launched against the commission.

“Civil society” makes a nice catchphrase, but few would care to elaborate on how they can play a role. To begin with, is our governance structure even conducive enough for civil society to be involved? Let’s digress from the combat against corrupt big fish and talk about what is in our backyard – waste management.

Waste management sounds mundane, but it has hit the news in unexpected ways over the past decade. Kepong residents went all the way to the Parliament to protest against a planned waste-to-energy incinerator next to their neighbourhood.

Before Broga Hill became popular as a hiking spot among Klang Valley city slickers, Broga villagers had to travel over 40km to the capital many times. They attempted to hold meetings and submit memorandums to ministers and the Prime Minister himself – to tell them to stop the waste incinerator project in Broga.

As a result of dogged resistance – and perhaps a stroke of luck, Broga got what they wanted after over four years. On the other hand, Kepong’s fate remains undecided as of writing.

At one point during the Broga resistance, the government splashed out on full-page newspaper advertisements about the wondrous benefits of Japanese incinerator technology.

What was left out, however, was how communities living near these incinerators in Japan were engaged. In the city of Kawaguchi, for instance, opposition surfaced when the plan to construct a waste incinerator was mooted. Instead of labelling the concerned city dwellers as “troublemakers”, the municipal council held over one hundred public hearings and local meetings to engage them. By 2002, the incinerator began its operations.

Indeed, as in the rest of Japan, waste incinerators are usually under the purview of local governments, which are voted in through local elections.

In contrast, the power to supervise municipal solid waste management in Malaysia is concentrated in the Ministry of Urban Wellbeing, Housing and Local Government. The ministry regulates the concessionaire companies in charge of waste management. It also formulates the waste management strategy of the whole nation.

To put it crudely, when Broga – and subsequently Kepong – was chosen to be the dump site of the whole of Kuala Lumpur/Selangor, the decision came from Putrajaya.

The municipal councils’ absence of authority to manage day-to-day waste has frustrated the protesters. Local councils were unresponsive and simply referred the matter to the federal ministry.

Why are the federal government and DBKL turn a deaf year [sic] to local people like us to abolish incinerator project? [sic] The answer is because we don’t have elected city mayor which results in he or she doesn’t even bother us. [sic]

To turn a cliched line by a Marvel comic character on its head, with little power comes little responsibility. Communities need to be empowered to take charge of their fate. Our centralised governance structure is certainly not fertile soil on which vibrant civil society grows.

Power needs to be dispersed downwards to the community level. This could mean bringing back local elections to make councillors or mayors more responsive and accountable. It could also mean transferring responsibility over waste matters to the local councils.

But can communities be entrusted with such responsibility? In many countries, waste separation is already established at the household level. Community-run sites that manage organic waste are also not uncommon. Communities can organise themselves to promote a zero waste management strategy that incorporates ‘reduce, reuse, and recycle’.

After all, Broga villagers, who had been derided as “uneducated”, were able to mobilise a formidable force, together with NGOs, and educated themselves about waste incinerators to launch a lawsuit and a sustained campaign.

So, the MACC representative was for once right in claiming that civil society plays a role. In Broga and Kepong, civil society mobilised against projects they believed to be harmful to their present lives and those of future generations.

But ultimately it is reactionary. Local communities should not be placed in a take-it-or-leave-it quandary. It is less pressing to build incinerators that produce energy than to harness people’s life energy with the right power structures.

Yew Wei Lit is a PhD candidate at City University of Hong Kong. His current research involves a comparative analysis of environmental protest outcomes, with Malaysia as one of the country studies.

Wei Lit attended the Aliran Young Writers Workshop on Federalism and Decentralisation, supported by the Canada Fund for Local Initiatives. “The workshop gave me helpful tips on how to connect with readers of the 21st century through words,” he says. 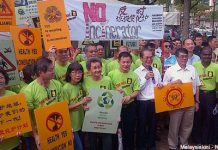