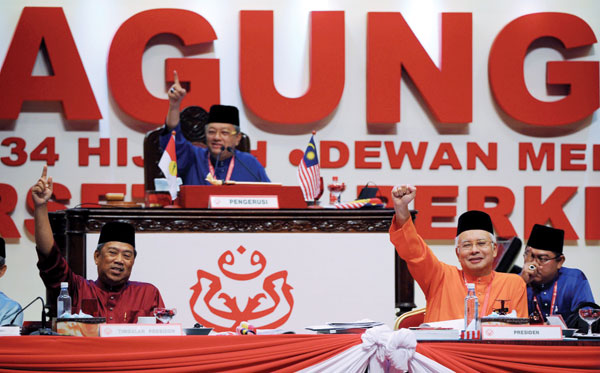 Umno leaders have cast aspersions on Dyana Sofya’s upbringing. Tota, however, points back and invites readers to judge the upbringing of the Umno leaders themselves.

Dyana Sofya, the DAP candidate contesting in the Teluk Intan by-election, has come under scathing attack from certain Umno goons and buffoons.

Their vicious attacks have nothing to do with her quality as a candidate, her intelligence, her knowledge and skills and the rational way she has articulated her party’s policies and programmes.

The attacks have been personal – negative comments about her age, her inexperience, her upbringing and her looks. All these are uncalled for and unwarranted and they reveal what stupid and low calibre men and women there are around who are masquerading as superbly brought up Umno leaders, as voiced by many disgusted Malaysians.

What was Dyana’s crime? She exercised her constitutional right and her freedom of choice to stand for election under a party of her choosing. This has incurred the wrath of Umno, according to which every Malay must be a Muslim. Every Malay, like a zombie, must support Umno.

A half-past six ex-PM has started the ball rolling by saying that Dyana was not well brought up because of her political action. Well, let us subject some of the Umno leaders to the test. Let us examine their words and actions and invite the rakyat to decide on their upbringing.

Let us start with Mahathir. He has never acknowledged his roots, claiming that because he is a Muslim and speaks Malay, he is a true Malay.

As Umno president, he became PM and served in that capacity for 22 long years to the detriment of the country. During this period he constantly abused his power. He used the infamous ISA recklessly and ruthlessly to incarcerate the best in the land.

Draconian laws like the ISA, OSA, the Universities and University Colleges Act, the Printing Presses and Publications Act were passed or tightened to strengthen his autocratic rule.

Corruption in the public sector galloped during his watch. He destroyed all independent institutions – the civil service, the judiciary, the Election Commission, the police, the Registrar of Societies, etc – and made them tools of the BN. He curbed civil rights and the freedom of the press.

He practised cronynism shamelessly. Public money was used to rescue his son from business failure. During his tenure of office, the number of scandals was astounding – the BMF scandal, the forex scandal, the loss of RM500m EPF money at the London Metal Exchange, to mention just a few.

READ MORE:  Umno returns to rule: What does the future hold?

He undermined the secular, democratic constitution, paving the way for a more prominent role for the Sharia Courts, which have created horrendous problems for non-Muslims in conversion cases.

He can hoodwink the people without batting an eye. He claimed that Anwar’s black eye was self-inflicted! He has gone to unbelievable lengths to destroy Anwar. Right thinking Malaysians detest him and despise him. He is now the proud patron of Perkasa, keeping company with the likes of Ibrahim Ali and Zulkifli Nordin.

For all his misdeeds, his name stinks. In his book, “The Other Malaysia” Farish A Noor says of Mahathir: “Whatever the man says – even if he claims two plus two equals four – is now dismissed as the words of the great Mahazalim, who is cruel, tyrannical and unjust.” He has been variously referred to as “Mahakejam” and “Mahafiraun”.

PM Najib has the reputation that doesn’t speak well of him. With regard to his relationship with Altantunya, contrary to popular belief, he has denied ever meeting her or knowing her. He has even sworn on the Qur’an denying ever meeting the woman though he has not submitted himself to a lie-detector test.

Right thinking Malaysians consider him a Dr Jekyll and Mr Hyde – not only allowing government-funded Perkasa, Perkida and Isma free rein to carry out their detestable extremist activities but also allowing Ibrahim Ali and Zulkifli Noordin to contest in GE13 as Umno candidates.

No action has been taken against him and Rosmah despite Deepak’s well-documented allegations against Najib and Rosmah. Najib has not dared to sue Deepak for defamation. It appears that the AG, the police and other authorities are not taking any action.

Zahid Hamidi, a vice-president of Umno, portrays himself as a great hero. A grossly unfair system of selection and promotion has discouraged non-Malays from joining the police force. But he accused the non-Malays of being unpatriotic!

Every time he opens his mouth, he puts his foot inside it. In a speech in Malacca, his nonsensical tirade and his references to the banned secret society Tiga Line – which he called benevolent gangsters – were revealed. (He later claimed he was quoted out of context.)

When he realised that there were reporters in the audience, he expelled them and threatened to close down their papers if they reported what he had said.

Umno leaders are protected and he lives happily ever after.

As a defence minister, according to many, he was a total failure, resulting in the Lahad Datu debacle. It was foolish to have sent policemen to quell the Sulu invaders. The poor policemen, ill prepared and ill equipped, were slaughtered unneccessarily. Many believe that he should have been sacked for his negligence, inefficiency, and irresponsibility.

Now, as Home Minister, he is perceived as a total failure. Contrary to government claims, the crime rate is worsening day by day. No one believes government statistics. The gated communities, private security guards and the steep rise in the sales of home cctv cameras and home alarm systems are a severe indictment on his efficiency. Women dare not carry handbags or wear jewellery in public and are fearful when on the road.

In 2006, a businessman Amir Bazli Abdullah claimed Zahid assaulted him at a club in Kajang and broke his nose.

Amir then initiated litigation against Zahid and got Karpal as his legal counsel. Karpal would have made Zahid shiver in court. Zahid quickly settled out of court minus Karpal.

His aggressive behaviour is disturbing. Now he calls the Chinese ungrateful. This so-called paragon of virtue has seen it fit to call Dyana Sofya not a pretty woman.

He is a leader in Umno, whose policy denies the children of the rakyat the opportunity to be taught Maths and Science in English. It is unbelievable how some poor Malays can be hoodwinked.

Hishammuddin Hussein, another Umno vice president, is a joke. He appears to be surviving because he is Najib’s cousin. At an Umno general assembly before 2008, he made screaming threats against the non-Malays, drew the keris and kissed it. This dastardly act was a contributory factor in the GE13 tusnami.

In the cowhead incident, he sided with the pro-Umno culprits and stated that a Hindu temple cannot exist in a Malay majority area. Going by his stupid logic, there would be no mosques in the US, UK, Australia, New Zealand, Canada, South America and in the 27 EU countries.

The High Court in considering the legality of Bersih 2.0 and 3.0 condemned him as “irrational” and “illogical”. A similar verdict was passed in the Borders case (twice) and the banning of the Malay version of Irshad Manji’s book “Allah, Liberty and Love”.

The High Court decisions are a slap in his face. Bakri Musa in his book “Liberating the Malay Mind” has this evalution of him and two other Umno leaders. He says “characters like Nazri, Rais and Hishammuddin are like durians that have remained unsold for far too long. They are tak laku (unsellable). All they do is stink the place.”

After Flight MH370 disappeared, Hishammuddin, the Mas CEO and the Director-General of Civil Aviation were a total disgrace and embarrassment at the daily briefings. Hishamuddin’s daily mantra was, “We’ve nothing to hide…”

Actually, there was nothing to hide except his short-comings. The French reporter must have wondered how a stupid guy like him could become a minister when she asked him whether he was related to the PM and if he was protected.

Sharizat’s husband was caught up in a massive NFC corruption scandal. This woman has the audacity to call Dyana a “puppet”. Many others, however, perceive Sharizat as a “bootlicker”. How else could a defeated, disgraced and discarded person be in the Cabinet?

Mukhriz came out third, after Khairy and Toyo, in the Umno Youth elections before 2008. Yet, he was appointed Deputy Minister of Trade and Industry, some perceive with his father’s influence. Would anyone with principles, integrity and decency have accepted the post which many felt was rightfully Khairy’s? Now, he has leap-frogged over many senior Umno members to become MB of Kedah.

Tan Sri Mohd Isa, was suspended for indulging in money politics. His suspension was lifted and he was allowed to contest in a by-election.

Mohd Ali Rustam was found guilty of money politics but continued as CM of Malacca, until he lost in GE12.

Muhammad Muhammad Taib was caught attempting to smuggle almost RM4m into Australia. No action was taken against him by the then ACA or the Inland Revenue Department.

Jamaludin Jarjis was implicated in a scandal at the Havana Club – though the alleged victim later inexplicably withdrew her police report. He then went on to become ambassador to the United States.

Unmo Youth chief Khairy’s words and actions speak loudly about his character and mentality. His Umno Youth leaders often behave like hooligans and samsengs, threatening people and the Opposition, the latest being a threat to destroy the DAP KL headquarters.

He and his youth wing are best remembered for their actions outside the American Embassy some years ago. Khairy was yelling and screaming like a madman. An ex-Peace Corp teacher mentioned his name and said that if this is the quality of a youth leader, she pities Malaysia.

Tota is the pseudoynm of an occasional contributor to our Thinking Allowed section.

Originally published on aliran.com on 30 May 2014.