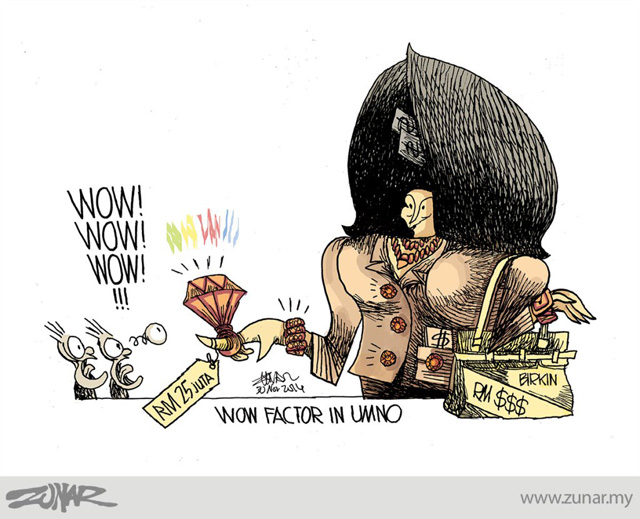 Umno’s ‘achievements’ have already prompted many to repeatedly exclaim “wow!” – though not in the way the party may have hoped, writes Tota.

Muhyiddin has been going around the country begging Umno divisions and branches to bring back the “wow factor” into Umno.

A prize of RM10,000 is offered to the winning ideas that would make the people go, “Wow! Umno has changed,” and prompt them to support Umno.

Through various undemocratic means the Umno-dominated Allirance/Barisan Nasional has held on to power for 57 long years. Though the country was going down in every area of national endeavour, the Alliance/Barisan Nasional won 11 elections with a two-thirds majority in Parliament.

Thinking Malaysians are well aware of the following:

· Umno is responsible for the erosion of the 1957 Constitution drafted by the Reid Commission. More than 60 amendments have not only destroyed its secular nature but also trampled upon human rights and civil liberties such as freedom of speech, freedom of assembly and freedom of the print and electronic media. It is politically clever of Umno. Wow!

· Umno is perceived to have undermined the Social Contract agreed upon by Umno, the MCA and the MIC prior to independence. Once equal partners, the MCA and MIC ‘sold out’ the rights of the non-Malays and became subordinate and subservient to Umno. It was politically clever of Umno. Wow!

The Umnoputeras and their cronies have plundered the wealth of these two entities, grabbed Native Customary Rights land in the name of development and exploited its rich oil fields with a pittance in royalty by Petronas to them.

Some 46 per cent of the population in Sarawak are Christian, but they are frequently treated as a minority and their bibles were confiscated (and only later released without an apology).

In Sabah, Project M has tilted the demographic composition of the population: illegal Muslim immigrants from Indonesia and the Philippines have given Sabah Muslim-majority status.

Despite all this, Sabah and Sarawak are considered “fixed deposits” for the Barisan in every general election. It is politically clever of Umno. Wow!

· Umno has eroded the federalist nature of the Constitution and the system of government through the centralisation of powers. And by cancelling local council elections, it all but destroyed participatory democracy at the local level. It is all BIG government – with much of the power concentrated in Putrajaya, leading to horrendous political corruption without checks and balances. It is politically clever of Umno. Wow!

· Umno, with the connivance and collusion of the MCA and the MIC, amended the Constitution to set up Sharia courts. Horrendous problems for non-Muslims in conversion cases were unleashed, with underaged children illegally converted and cases of body-snatching emerging. Now some extremist Muslim zealots are claiming that civil courts are subordinate to Sharia courts. It was politically clever of Umno. Wow!

· The Islamic religious establishment – Mais, Jais, Jakim, etc – are perceived to be beyond anyone’s control, indeed, a law unto themselves. In many other countries, fatwas are merely advisory in nature, but in Malaysia they appear to have the force of law.

Serious violations of constitutional provisions have occurred over the conversion of under-age children when one spouse converts to Islam.

Then there was the arrest and confiscation of books at Borders bookshop and the non-compliance of a High Court order to return converted under-age children to the rightful non-Muslim mothers.

They are not only defenders of the faith but also the moral police whose easy targets appear to be Muslim women, who get punished attempting to participate in beauty contests etc.  These religious bodies appear to have obtained their legitimacy from Umno, who have packaged themselvesas defenders of the faith, ‘bangsa’ and negara. It is politically clever of Umno. Wow!

· Umno has been responsible for destroying almost all independent institutions – the civil service, the police, the judiciary, the MACC, the Election Commission, the Registrar of Societies, etc. Some of these institutions now appear to act like tools of the BN to ensure that it stays in power. Despite this, fewer than 50 per cent of the voters are voting for BN. It is politically clever of Umno. Wow!

· Many racists are running around and there are Islamo-fascists are in many layers of the public sector. Racism and discrimination appear to be institutionalised. Umno has successfully fooled the outside world and the rest of the BN into thinking that Malaysia is a model multi-ethnic, multi-religious and multicultural country. It is politically clever of Umno. Wow!

· The rule of law has broken down and it is now rule by law. The ISA, camouflaged as some other law allowing detention without trial, and the outdated Sedition Act lately have been applied ruthlessly and mercilessly. The OSA, the Printing Presses and Publications Act and the Universities and University Colleges Act give a lie to the claim by Umno that Malaysia is the world’s best democracy!

The attorney general closed the case of the seized Bibles but the Islamic religious establishment appeared reluctant to return confiscated bibles until later.

The IGP refused to obey a High Court order to ensure the return of a Hindu child, kidnapped by his converted Muslim father, to the Hindu mother.

The Home Minister refused to obey a High Court order to grant Malaysiakini the permit to print its newspaper.

Umno claims it is a law-abiding party, but it needs all these oppressive laws to maintain national security. How politically clever of Umno. Wow!

· The economy is sliding badly because of rotten economic policies and practices. The plunder of the nation’s wealth and resources by Umnoputras, their families and their cronies goes on virtually unchecked. The central government’s debt is approaching 55 per cent of GDP.

Horrendous political corruption; serious leakages; GLCs siphoning off lots of money from the public treasury; and negotiated tenders with built-in provisions for cost overruns are depleting the nation’s wealth and resources.

Despite this, the Umno-dominated government says the economy is sound and doing well. How politically clever of Umno. Wow!

· Corruption in the police force is legendary as confirmed, by RCI findings findings. Some in the force appear to be experts at harassment, intimidation and brutality. Their actions against the Reformasi and Hindraf activists and Bersih participants confirm this.  Statistics show 156 persons died in police custody between 2000 and February 2011. And in only a few cases have coroner’s inquests been held.

Somehow, Umno leaders and their cronies are rarely hauled up. Not surprisingly, the Umno-led government has thus far refused to establish an Independent Police Complaints and Misconduct Commission. The reason: our police force is one of the best in the world. How politically clever of Umno. Wow!

· Chinese and Indian Malaysians often perceive themselves as victims of racial discrimination. Because a sizeable number of them did not vote for BN, they seem to be constantly bashed by some Umno politicians. But now, Umno claims that these communities have returned to the BN fold. How politically clever of Unmo. Wow!

· The current mantra by Umno is moderation – whatever they mean by it – but extremists such as Ibrahim Ali and Zulkifli Nordin roaming free and demonising the non-Muslims with impunity. Their words and deeds of these figures are defended because, in the eyes of the establishment, they are defending Islam. How politically clever of Umno. Wow!

· Umno leaders keep talking endlessly about 1Malaysia but in the same breath talk about the Malay Agenda, ketuanan Melayu, Malay hegemony and Malay supremacy to satisfy the Malay rakyat. How politically clever of Umno. Wow!

· Our education system is “an absolute disaster” (Zaid Ibrahim’s words). In the Pisa test for primary schoolchildren, Malaysia was ranked below Vietnam! Our universities produce thousands of unemployable graduates.

The children of Umno leaders and cronies are studying in private schools, receiving instructions in English for Mathematics and Science. Some of them are in the UK; others are in Australia. But the Umno-dominated government will not allow the children of the rakyat in the national schools to be taught Mathematics and Science in English for reasons of nationalism! How hypocritical. And how politically clever of Umno. Wow!

· Umnoputras, their families and their cronies are perceived to have hijacked the NEP to enrich themselves and amass great wealth while many among the rural Malays continue to live in poverty. As long as the rural Malays are dependent on Umno for the crumbs, the party knows their rural vote bank is safe. How politically clever of Umno. Wow!

Tota is a contributor to our Thinking Allowed Online section.