The deterioration in the quality of life and the spiralling cost of living are taking their toll on the average Malaysian. We are sinking and may hit rock bottom soon, warns Rakyat Jelata.

Protesters were warned not to bring along their young children or to use loudspeakers, among other things, that could violate the Peaceful Assembly Act (PAA).

A couple of days earlier, Home Affairs Minister Zahid Hamidi, rebuked opposition state governments for not insisting that protests be held in enclosed or specific sites such as stadiums around Kuala Lumpur city. Road blocks would not be erected along specific routes into the city, as had been done in the past, pending this anticipated big protest march.

Whilst the police seemed to be giving some leeway for peaceful public protests, there was an uneasy feeling about this apparent positive turn-around by the authorities, still wielding the PAA, and other draconian laws like Sosma (Security Offenses (Special Measures) Act).

In the wake of US President Obama’s visit to Malaysia, this sudden change of tactics was unsurprising. Such show-case measures – to give the impression that the Malaysian government has seen the wisdom of upholding basic human rights – have often been activated for brief periods, before retrogression sets in again.

Otherwise, this turnaround was only on the surface, and the positive effect of it was countered by the activation of a more draconian measure. This, in fact, could be seen in the sudden discovery of and crackdown on alleged terrorists ready to launch an international ‘jihad’, supposedly linked to Al-Qaeda and JI, in the northern states of the peninsula.

How true the allegations were is debatable, as one non-government movement complained of the arrest of one of its active members. Solidariti Anak Muda Malaysia (SAMM) made a press statement on the arrest of Saiden Muslimin Ismail under Sosma on 30 April.

Is this a reason for other non-governmental movements and organisations to be wary of any federal turnaround that may seem to support the promotion of human rights in Malaysia – the so-called positive acts merely being a means to further suppress human rights under the devious guise of implementing anti-terrorist measures for national security.

Malaysia is definitely in ‘May Day’ mode, unfortunately, not the positive victory celebration of hard won labour rights. Instead, the May Day rally was in protest at a further deterioration of governance, epidemic corruption in high places, the spiralling costs of living bringing further hardship to the lives of more people, and the overall undermining of basic human rights and fundamental freedoms. The Malaysian people today are sending out an SOS to the world.

There was uncertainty over whether the security forces would suddenly appear to stifle the GST protest. After all, there was nothing to prevent agents provocateurs or FRU tear gas and water cannon or batons, sent in without warning to break up the peaceful protest as was done in the past. Police heavy-handedness is not uncommon or unusual in these circumstances.

Although this didn’t happen, the mainstream media homed in and amplified an attempted incitement to violence of a very small unknown group mingling with the majority of genuine protesters. It was reported that no arrests were made.

But the deterioration in the quality of life and the spiralling cost of living are taking their toll on the average Malaysian. We are sinking and may hit rock bottom quite soon.

“May Day! May Day! This is Malaysia, we are sinking into the mire of false democracy and one-party autocracy!” 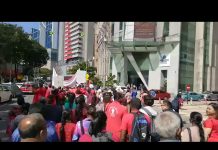 This is the result of years of neglect except the Umno schmucks are seen to be implementing projects for the benefits of the people. Take for example like building the smart tunnel by the egregious Mahathir and what has the smart tunnel for K.L
especially when the cost of it was considered sky high even by to day’s standard. Like I always said that only (certain parties) benefited from this white elephant …
… these mega projects … do not serve the purposes that they were built for, the smart tunnel is a good example and so are all the mega projects. Every time when it rains the city became gridlocked is proof of that not to mention the gigantic amount it cost. Over time in the near future more will be revealed…
… I can go on and on for weeks and months writing about this egregious Mahathir and all his ‘achievements’ but the above brief accounts of his actions are enough for now !