Men in our society should be taught to appreciate the contribution of female atheletes. Most of all, some of these men need to learn how to behave and back off, says Syerleena Abdul Rashid.

Lately, female athletes have been subjected to a lot of criticism and censure in our country.

The apparent escalation of misogyny that seems to dominate our local political arena is nothing more than the insecurities and anxiety faced by several men in our society; hence, the need to enforce some form of patriarchal control upon women is an upsetting blow to gender equality and female empowerment.

Just a few weeks ago, the Pas-led Kelantan government allowed the banning of male spectators from attending a women’s sporting event. Such a move is not only counter-productive to Malaysia’s growth but it is a huge step backwards in terms of nation building. It even goes against the essence of Islamic teaching – where one is urged to live a healthy lifestyle as well as embrace physical, emotional and mental well being.

Recently, Ikatan Muslimin Malaysia (Isma) openly criticised the Kedah authorities for allowing advertisements of what they believed to be “sexy” female Muay Thai fighters. It is not surprising that this ultra-conservative organisation would go as far as claiming that these “pictures would invite the wrath of God”. Not only are such claims irrational and illogical, but they also exude the type of absurdity that catapults the human mind (or at least to some of us, who see the world through different eyes) into a perpetual state of perplexity.

Muay Thai (Thai boxing, which is also known as tomoi in Malaysia) is not only a great way to stay in shape but it also teaches women to defend themselves, something much needed in present society, due to the escalating crime and violence in our country.

I am sure everyone, including members of Isma, are aware of the benefits of exercise. Taking part in sporting or any physical activity can prevent a variety of illnesses and can offset chronic diseases, later in life. It has also been proven that exercise can also prevent osteoporosis, a common illness often faced by older women.

Additionally, such participation allows the development of a wide range of skills such as team work, leadership, respect, confidence and boosting one’s self esteem. In other words, sport has the ability to truly empower women in all communities and create leaders.

Although modesty is encouraged in our society, surely the positive benefits of sport and exercise should trump everything else. Besides, this is the message that we – including the men in our society – should prioritise.

Women athletes suffer from a form of “sexual objectification”, where both the media and the bigoted male mind are at fault. Female sporting events are usually not as heavily promoted or publicised and, as a result, are not well attended or supported.

To make things worse, female athletes are usually seen as “amateurs” (with the exception of a handful of professional athletes such as Serena Williams, Debi Purcell and Nicol David, to name a few). Fortunately, the Olympics provides a platform where both female and male participants compete and are regarded as true equals; however, this event only happens once every four years, which is not enough to sustain support or encourage appreciation towards women empowerment through sport.

Whether you agree or not, sex appeal has become apparent in the sports industry and this is magnified by the media portrayal of women in this field. From athletes to ringside girls, from coaches to cheerleaders, this pointless assimilation is degrading to women and mocks the spirit of camaraderie – a portrayal which seems to be aggressively encouraged in this industry.

As a result, when focus in given to physical appearances (i.e. looks or even clothes) rather than an athletes’ ability, achievements or performance, this makes sport lose some shred of credibility.

Women are often viewed as being “weak” and are simply discouraged from participating in sports, or in this case any combative sport, because it goes against whatever stereotype which may have been imposed upon the women in their community.

Patriarchal values and misogyny are becoming more apparent as the wave of neo-conservatism is somewhat gaining recognition in our society. As a result, women athletes are caught in between traditional customs and advancements made within the sports industry.

The world has grown familiar and weary of absurd policies created by extremist organisations such as Isis and the Talibans (organisations known to exploit, oppress and harm women from various communities). Condoning (even if passively insinuating) irrational suggestions and illogical beliefs, mooted by some of our local men, only affirms our country’s growing intolerance and chauvinism. The rising insularity and sexism targeted at women in a multi-ethnic, multi-lingual nation such as Malaysia, has to stop.

Jackie Joyner-Kersee once famously said, ”Girls playing sports is not about winning gold medals. It’s about self-esteem, learning to compete and learning how hard you have to work in order to achieve your goals.”

As a trained Muay Thai exponent, I say it is time men in our society learn to revere female athletes and celebrate their achievements, to value their contribution to society.

But most of all, some of these men need to learn how to behave and back off. 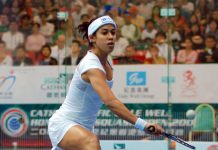 Fragmentation of Malays and intra-Umno conflict