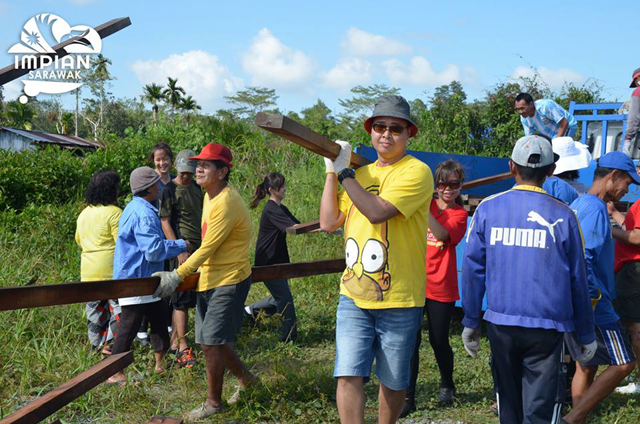 Sara Loh recounts her memorable experience as an orang bandar immersed in Kampung Sg Rasau in Sibu, working alongside locals to construct a wharf and rebuild two jetties.

Three weeks ago, I spent nine days in the idyllic Kampung Sg Rasau, Sibu, on an Impian Sarawak project. What am I talking about?

Disclaimer: Impian Sarawak is a public-funded initiative by DAP to bring orang bandar from Semenanjung Malaysia to Sarawak to contribute to fundamental infrastructure projects and to experience for themselves life on the other side of Malaysia.

These experiences have taken a back seat in the light of major issues faced in Malaysia, ie. the MH370 mystery, the reversal of Anwar’s acquittal, the haze, the Kajang by-election. Nevertheless, friends and family have encouraged me to share my Impian Sarawak experiences with a wider network because we could all use a little more hope.

We occasionally hear about the political situation in Sarawak, especially following the recent retirement of Taib as the Menteri Besar, but how many of us have experienced first-hand the living conditions in Sarawak? I definitely had not. And so, I write this at the risk of romanticising this small kampung in Sarawak.

Our team of nine orang bandar volunteers and three team leaders was to work alongside orang kampung from Rumah Juan and Rumah Pasang – two rumah panjang situated about five minutes apart in Rasau – to rebuild their two jetties and build a wharf for Rumah Pasang.

We were told to begin with no expectations. I tried.

It was my first time to Sibu, let alone in a kampung two hours upriver. We boarded a ferry, the main means of transport in this area, which stopped at many kampung jetties along the river before reaching Rasau.

Once there, we got to work immediately and carried planks of solid belian wood from the lorry drop-off point to the respective jetties. The work ended with a sharing session over tuak (Sarawakian rice alcohol), followed by quite the feast for dinner – chicken soup and veggies. That night, we orang bandar, who were unused to starlit skies, hung out at the jetty and counted shooting stars. (This soon became a nightly occurrence.)

We came home to tilam-tilam setup for us in our host families’ ruang tamu. It was quite a challenge going to sleep without air ventilation -the kampung did not have electricity and ran on generators switched off prior to bedtime – but the temperature soon cooled down, and we managed better as the days went by.

The next day proved interesting. We began the day early (rise and shine at 5:30am) only to realise that we were awake before our host family!

When the orang kampung finally began work, we attempted to assist with building of the rangka (frame) of the jetty. We helped as much as we could – hammering crooked nail after crooked nail, with a couple of successful ones in between. We may have provided more comic relief for orang kampung as opposed to actual help. But, we did take full responsibility of washing and painting the jetty.

Nevertheless, this gave us the liberty to mingle with the orang kampung, play with the kids, help the makcik with cooking, and get to know the families that inhabited the two rumah panjang that we lived in.

The rest of the nine days were an exercise of learning about a simpler, more flexible way of life that depended on your surroundings. Each day we would awake, minum kopi, work on the jetty, have brunch, work a bit more, have lunch, resume for a few hours before air pasang (the tide comes in) and you have no way of working on the jetty without being half submerged in river water.

In these latter hours, these orang kampung shared their daily activities with us strangers. Aside from working alongside orang kampung to build the jetty, we “foraged” for midin (a special fern that grows solely in Borneo) and learned which parts of the plants were edible and most tasty, how to tell what was or wasn’t poisonous, how and where they grew, etc.

We collected siput with some kakak from the kampung – this involved trudging in thick ankle-deep mud, flipping wooden planks over to occasionally hit the jackpot and find some siput!

They took us to their sawah where the kampung women had begun harvesting padi for the season. We tried nasi Rasau – rice will never taste the same again.

In the evenings, we had friendly kayuh perahu and swimming races with the orang kampung. We bonded and laughed over their competence and our volunteers’ incompetence.

They had no qualms about accommodating us. They shared their music and dance (oh boy, these ladies and kids could dance..), traditional dress (only worn for wedding ceremonies, which means they sometimes needed to be reminded which layer – there were about six! – goes on first as they were dressing us), and most importantly, they shared their stories.

We talked about everything with refreshing honesty and curiosity. We talked about politics – who supports who in their rumah panjang and kampung, their experiences with BR1M, insurance, the current Sarawak state government, their efforts to claim remuneration for land sales (in fact, while we were there, there was an ongoing court case between our host dad and the company belonging to one of Taib’s sons-in-law who hadn’t bayar pampasan until today), Native Customary Rights (NCR).

Our host even told me about the numerous YBs who lived in his home during elections, and as a result won their respective seats! (I guess it’s my turn next.) He also told us about how he listens to Radio Free Sarawak. (Note: Throughout my stay there, I’ve never watched so much TV3 propaganda in my life, but it was our only means to current news.)

They also told us about their livelihoods (many of the pakcik and young men work in Sibu or logging areas and came home specially to work on the jetties); their families (where their children and grandchildren are studying or working, some even tried to marry us into their families); their views on education (some of the elderly men have perfect English courtesy of their schooling days in the 1960s and 70s, but no longer practise); and their kampung practices.

Rumah panjang are normally quite segregated, and even within each one, the politics can be quite divisive, but we did manage to bring two houses together for meals, and also witnessed non-DAP supporters come out in pure semangat gotong-royong to build the jetties. (This doesn’t even happen very often in Semenanjung.)

While Rasau is one of the better off kampungs that Impian has worked with – it has flowing water from the water lodge; a primary and secondary school; a clinic; a Celcom tower; access to supplies from the Banong Cina (a kedai runcit on a boat) which goes up and down river daily; ferry access to Sibu – there are still major issues which should have been tackled by now.

Firstly, there is the issue of a proper rubbish disposal system. Aside from metal, which is collected and sold to a boat that comes round ever so often, and biodegradable waste, which goes to feeding their animals, everything, from swine waste to old tikar, to plastic bottles and onion peel, goes into the river.

After realising that we were creating excess waste for the kampung, we began to collect and separate our waste to be brought back to Sibu for recycling. The best part was that some of the youth and children began asking about recycling methods. Hopefully, this will catch on, but there is much work to be done.

Secondly, individual homes within the rumah panjang of Rasau still run on generators; one gallon of oil is RM12 (diesel) or RM14 (petrol). Each gallon lasts as long as they conserve it. As mentioned, their generators are switched on in the evenings and switched off prior to bedtime. They have petitioned for Sesco access in their kampung, to no avail.

They’ve also written to ask for road repairs for the jalan jahat, as they call it, that leads from Sibu to their kampung – also to no avail. Apparently the budget for all of this has been allocated but has ‘miraculously’ disappeared.

This process is definitely not foreign to us from Semenanjung. The only difference is that we can make a bigger racket since we have more means of voicing our complaints – i.e. access to alternative media, stronger civil society, and relatively reliable physical infrastructure that links us to the main cities and the offices of our Aduns and MPs.

Since returning, as cliché as this may sound, this city girl learned first hand how important it is for those with authority and power to put the rakyat first.

Harsh words have been spoken and written to criticise Impian Sarawak efforts as purely politically driven and as replicas of what the BN has been doing in East Malaysia for ages. There have also been articles written about a BN version of Impian Sarawak (this is actually great news as once again, it is the rakyat who benefit!).

From my own experience this trip, Impian Sarawak prioritises going through local channels to offer help to communities that petition for it; whatever politics happens as a result of that should be secondary. The idea is to do away with the mentality of vote-buying and the concept of a provider (political party) and a dependant (orang kampung).

At the end of the day, my thoughts return to this presumed yet sometimes overlooked fact: It is the responsibility of all rakyat Malaysia (and dunia) to possess a critical consciousness in which we are intrinsically aware of our basic rights and the inconsistencies in access to these rights. Ideally, this will lead to a self-determined, active participation in the struggle to improve our own present situations. In this sense of struggle, Rasau is not too different from our own kampungs wherever we may be.

Sara Loh is a recent graduate of Smith College, a women’s college in the US. She is curious about the pockets where media, politics, the arts and society intersect.