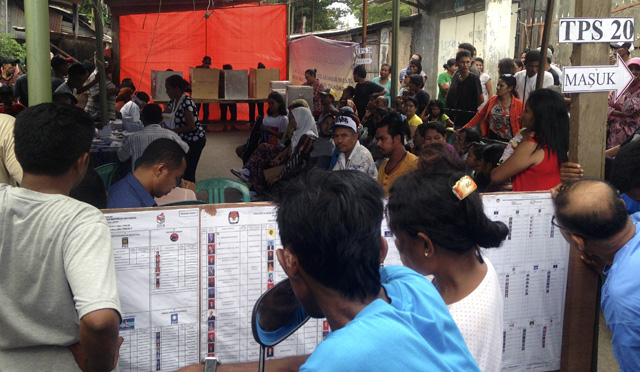 Azmil Tayeb reports on Indonesia’s legislative elections, which would most likely lead to the election of the first president untainted by association with Suharto’s New Order regime.

On 9 April, Indonesia, the world’s third largest democracy, went through its fourth legislative election since the fall of Suharto’s authoritarian regime in May 1998.

Unofficially, around 72 per cent of 190m registered voters had cast their votes, an almost similar turnout to the 2009 election. Considering the sheer number of voters and Indonesia’s vast and disparate geographic area, it seemed like a logistical nightmare waiting to happen. But apart from a few scattered reports of ballot papers not arriving on time, electoral disruptions were minimal.

Some feared the possibility of violence breaking out on election day especially in the province of Aceh, where a few politically-motivated murders took place in the lead up to the election. But fortunately, it did not materialise.

The voting that I observed in the city of Kupang in the province of Nusa Tenggara Timur seemed to be going swimmingly, without any hitch. There were enough polling stations (called Tempat Pemungutan Suara or TPS in Indonesian) for everyone and there were even TPS’s that closed early as everyone on their voters’ list had cast their votes. Chairs were even provided for voters to have a seat while waiting for their names to be called to pick up the ballot papers; it was almost like being in a bank.

The voting system is quite similar to Malaysia’s. Witnesses from parties contesting in a particular constituency were present to ensure there was no vote tampering. Instead of marking one’s choice on the ballot paper like in Malaysia, Indonesian voters punch a hole into theirs; hence the term “coblos” (to punch a hole).

After casting their ballots, voters would dip their pinkie finger into a bottle of indelible ink, a powerful symbol of exercising one of the basic democratic rights. So far there has been no news about indelible ink being washed off after some vigorous scrubbing with soap! Likewise, there has also been no news of foul play though it might still be too early to tell.

The opposition Partai Demokrasi Indonesia – Perjuangan (PDI-P) has so far managed to pick up the most votes, around 20 per cent, enough for the party to nominate its own presidential candidate (Joko Widodo, the current governor of Jakarta) without forming a coalition with the other parties.

Still, this may be seen as a lacklustre performance by the PDI-P as it had been banking on bagging at least 30 per cent of the votes, mainly due to the overwhelming popularity of Jokowi (Joko Widodo’s nickname). No wonder PDI-P head honchos Megawati Sukarnoputri and her daughter Puan Maharani appeared glum in their press conferences.

Another surprise was the performance of one of the major Islamic parties, Partai Keadilan Sejahtera (PKS). The PKS had been embroiled in major corruption scandals resulting in the conviction of its top leaders. Poll after damning poll before the election indicated that the PKS was so unpopular that it would suffer significantly, even at the serious risk of not reaching the electoral threshold of 3.5 per cent.

The latest ‘quick count’ shows that the PKS has managed to maintain the same percentage of votes it received in the last election: 7-8 per cent. One explanation is that the PKS is supported by dedicated cadres who completely – some say blindly – believe in the righteousness of the party and its leaders, regardless of what has been reported in the media, unlike supporters of other parties, who are generally paid in some form or another.

So what happen’s next? A presidential election on 9 July will determine the strategies and direction the parties take in the next few weeks.

The kind of coalition that will emerge will depend on the pragmatism, opportunism and diminution of larger-than-life egos, and possibly, the burying of old grudges. The PDI-P will most definitely be at the head of this coalition as the largest party; it will have the discretion of choosing partners based on its agenda and ensuring a stable future government.

One thing seems to be a foregone conclusion: Jokowi will most likely be elected as the President of Indonesia if there are no surprises in the next three months. The question then is, who will be his deputy and which parties will be included in the ruling coalition.

Whether it will be politics as usual or a new era of change – Jokowi, if elected, will be the first president untainted by association with Suharto’s New Order regime – remains to be seen.