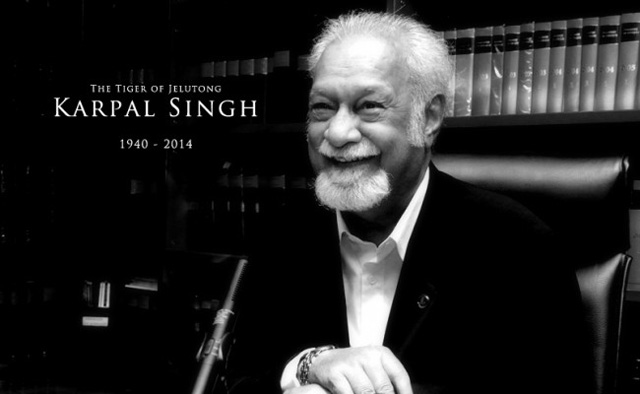 When judicial reasoning, falls short of the highest standards expected, it may be criticised. That was the basis of his earlier comment on Karpal’s final conviction, says Clive Kessler.

I have just seen a copy of the issue of Aliran magazine (Vol. 33 No. 10 of 2014) that is devoted to the memory of Karpal Singh (and Irene Fernandez).

On opening that publication, the first thing that I came across was an “Ode on the death of Karpal Singh, MP”.

Who, I wondered, might have ventured to write a poem —— whether an ode or elegy —— on that subject?

So I did not look at the poem itself.

Instead my eye leapt straight to the bottom of the page … and, to my great surprise, the name that i found there at the bottom was my own!

How did this strange outcome occur?

Well, I suppose it is quite simple, really.

Simple, but also more than a little odd.

As my friends know, I regularly send things to them by email: copies of news reports, especially about Malaysian developments, and sometimes, too, my own brief comments on those developments.

… And, as my friends also know well (since some have on occasion commented upon, and even complained to me about, my apparent habit of “email ‘shouting’” —— meaning using capitals, or “upper case” letters), I generally send my own comments in a rather strange format.

Because of some severe, and increasing, eyesight (“vision”) problems I find it very difficult to work on PC “screens”: especially, it seems, when working on, or “managing”, email.

So I generally compose and set out my messages not in sentences but phrase by phase —— which I “lay out” separately, in “capital letters” (“caps” or “upper case” characters).

More, to be able clearly to see what I am doing and saying and writing, I have to set these phrases out in a very well-spread, spacious format.

Often I increase the font size, too, to help me see what I am working on, composing. And at times I also make sure that the text is made to stand out further in bold typeface.

That is what I often do, and what I did on that morning some weeks ago (17 April) when, to my great shock, I arrived at work, turned on my computer, opened my email and learnt that Karpal Singh had been killed in a traffic accident.

After a few minutes, I put in words (on “virtual” paper) what I felt, and then sent my words to the friends on my list to whom I usually forward such things.

That was it, that was all.

Nothing more than that was intended.

Some time later, one friend got back to me and asked if I would mind if he included my words in a tribute to Karpal Singh that he was collating and preparing for a blog.

A personal blog, I thought, that seems fine.

Imagine my surprise, then, when a day or two ago I found my words appearing in a significant publication such as Aliran; these were words that I had intended to share just with a few friends, not to convey to the world at large.

And imagine my further surprise, when I saw that, because of my odd or “idiosyncratic” way of laying out my words not as sentences but phrase-by-phrase, what I had written was now construed as poetry. That it had been identified and was now publicly offered as an “Ode on the death of Karpal Singh”.

There is the famous old joke from a play by Molière about that Monsieur Jourdain who was pleasantly surprised to learn that what he had always been speaking was “prose”.

My situation now was the reverse: I now discovered that the prose that I had uttered was considered as, and had now become, “poetry”.

It is all very bewildering.

So, may I make it clear: I am not, and do not claim to be, a poet. I did not write an ode, or any kind of poetry. (If people wish to see or take it as that, then that is their business, not mine.)

And more, may I also make it entirely clear that my words were not intended for mass publication —— only as a way of communicating my shock to some friends, and sharing with them my grief, on hearing the news of Karpal’s death.

Yes, those are my words. They are what I wrote and what I felt.

And they remain what I think. I stand by them, their substance.

But, people should be clear, it was not my intention to make a huge public statement.

Yes, I did say and do believe, that the final judgment against Karpal Singh was wrong, was badly wrong, was a terrible verdict.

I found its basis, its reasoning, absurd and outrageously so.

Did I intend, and do I intend, to express my disrespect, even a contempt, for the courts, for judges, for the law of Malaysia?

I respect the law, the courts and their judges. I respect and honour them profoundly, since without them a just and decent society is impossible.

But while I respect the courts and their judges, as great institutions of the law, I do not give automatic respect and deference to, but (when I encounter it) find wanting and so criticise, bad reasoning … And that is what my anger and criticism were again directed against in my immediate response to the news of Karpal’s death.

Not against the courts and their judges, without which people may all too easily tear themselves apart like wild animals, nor against their judges, but against bad reasoning, what I see as bad judicial thinking.

When any kind of reasoning, but especially judicial reasoning, falls short of that standard and that requirement, it may be criticised, and also needs to be.

That was my meaning, that is what I was trying to say.

That was the basis of my comment on Karpal’s final conviction —— in consequence of which he left us bearing the ignominy yet also the paradoxical honour off dying as a convicted felon, branded as an enemy of law and order and of the state as their guarantor.

For such a lover and upholder of justice, that was a most strange and undeserved fate —— I sought to plead —— a bizarre leave-taking from the company of decent humankind: of which he was, until the end and despite that (in my view flawed) judgment, a member in full standing, and of undiminished reputability and honour.

Clive Kessler is Emeritus Professor of Sociology & Anthropology at the University of New South Wales, Sydney.