As a nation, we must condemn political thuggery wherever it appears and we must not allow it to become part of our political process, writes Christopher Chong.

In the early hours of 19 April, a group of student activists camping at Dataran Merdeka lobbying for free tertiary education found themselves attacked by a group of unidentified men. Their camps were looted and destroyed while and they were verbally abused.

Apparently, this group wanted the students to leave the Dataran and cease their lobbying.

It is perhaps ironic that Dataran Merdeka (Independence Square), of all places, became a site where political thuggery took place. It was here that the British flag was lowered and the national flag rose for the first time. The Dataran is important for the nation not only because of its historical significance but also because it is a space where freedom of expression and public assembly for the nation can be practised without fear of personal safety.

As Malaysians, we should feel ashamed that such an ugly incident took place there – more so against youths who were exercising their rights as enshrined by the Federal Constitution. Whether one agrees with their demands is not important. What is important is the fact they camped at Dataran Merdeka to lobby for free tertiary education as a political action. For a very long time, youths have been accused of political apathy; should they not be encouraged to participate in the political process of which freedom of expression and public gathering is part?

This incident is alarming because there have been a few incidents where mobs attacked peaceful public gatherings because they disagree with the opinion being voiced. We should be alarmed lest such unruly behaviour takes root in our political culture!

Voicing one’s opinion publicly and holding gatherings of like-minded individuals in public spaces for this purpose is part and parcel of democratic politics. One may disagree with the opinions of those gathered and give voice to disagreement but to harass them goes against the democratic principles that founded this nation.

The Rukun Negara calls for the demonstration of common courtesy towards all Malaysians (kesopanan dan kesusilaan) and respect for the rule of law (kedaulatan undang-undang). Political thuggery violates the very principles this nation stands for!

Christopher Chong is a member of Aliran. 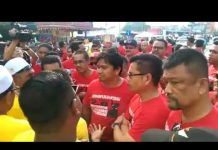 Thugs turn up at analyst’s home

What do you expect thug to do ? Or better still what else do they know to do, it must be their innate natures.