John Inbaraj remains exasperated by the Home Ministry’s failure to deal with the problem of foreigners entering the country illegally.

In an earlier article which appeared under this section entitled “Something is rotten about migrant workers’ entry rules” (19 September 2011), I had quite openly implied that the government lacked the will to fight the undocumented workers problem in the country and that rampant corruption had blurred the vision of the authorities from within and without the country in creating a clean and safe environment for locals hiring foreign workers and for foreign workers themselves.

I had also called for the authorities to stop the flood of undocumented workers and to keep our shores safe from health-related and social problems and “undocumented” criminals roaming in our midst without fear.

It did not take long for all of the above to be reinforced in the media in the days that followed.

theSun (21 September) carried a front page article which shouted “Unapproved labour”! The Star and New Straits Times carried similar articles. The Home Minister revealed that 2320034 foreign workers were registered via the biometric system. Of these 1303120 were illegals (almost 50 per cent), some 327991 of whom were employed in mining, car workshops, fast food restaurant and food stalls and as fishermen and newspaper vendors. Some of these illegals are self-employed and some have become employers. These areas are not in the approved list of work for foreigners.

The saddest part of this whole episode is that Hishammuddin, whose Home Ministry was accorded No. 1 status for Key Performance Indicators (KPI) achievements, is quoted as saying “Even though the scenario is not new, it is difficult for the authorities to take action against them due to falsification of documents and identities and other abuses of work permits and passes.”

And mind you, he adds, “As such, the Home Ministry is considering suggestions by employers who have pleaded that special permission be given for the illegal workers in the non-approved sectors, to be included in the legalisation process.”

I am exasperated, breathless and completely lost. People who challenge conditions set by the Home Ministry, falsify documents, cheat, lie and abuse are granted a reprieve?

You even have fast food chains – “respected” and probably internationally recognised food outlets – employing illegal workers? And you condone that! Hey Minister, have you any respect for yourself? Doesn’t it anger you when foreigners and especially local employers don’t give a damn for your rules and regulations and what you say?

At this point let me digress a little and draw our readers attention to an incident that happened to a friend of mine some time back. This was over an sms informing him of a substantial cash winning. My friend, recognising that it was a scam originating from an Indonesian mobile number, called to threaten the sender with a police report but the response he got was “Report-lah! Malaysian punya polis semua bodoh-lah!”

As a Malaysian how did I feel? Anger yes, but at the same time wasn’t he right? Has this scourge now spread to the Home Minister and the Deputy Prime Minister too?

In The Star (25 September), Amy Chew featured an article titled “Hiring maids direct is risky” with a rider that read, “Malaysians entering Indonesia to recruit maids face arrest under the laws of the country as the ban is still in place.” This was quoted by the Indonesian Manpower and Transmigration Ministry’s Director-General for Development, Protection and Placement of Migrant Workers, Reyna Usman. He says, “Yes, a person coming to Indonesia to directly recruit a maid can be arrested.”

Suryana Sastradiredja, Minister Counsellor for information, social and cultural affairs at the Indonesian Embassy is one man who seems strongly against direct recruitment. Yet Amy’s article itself begins with beautiful stories about direct recruitment. Both employer and employee get to know each other before formal arrangements.

Suryana says, “If a maid recruited directly gets a good employer who pays her wages and treats her well then that is fine, but if she is unlucky and ends up with a bad employer who abuses her, it would be hard for us to trace her as we won’t know where she lives.”

Does anyone see any sense in this argument? The only difference in direct recruitment is the eradication of the agent/s. All other documentation is still available. Besides, how reliable have agents been?

In spite of all that has happened, one thing is seriously absent, a central governing body to receive complaints from maids, employers and whistle-blowers, conduct spot checks and enforce the provisions of agreements signed between employer and maid.

Why can’t an agency like Biro Angkasa be established through which salaries are paid to all migrant workers?

If the Malaysian government is genuine, it should come down hard on those who enter the country illegally and who are made illegal by unscrupulous agents; this constitutes human trafficking. I refer to now and beyond. The 6P programme promised to act against those who did not respond to this amnesty (past). So those who are still in our shores illegally must be caught, appropriate action taken and sent back, without compromise. Not a single undocumented non-Malaysian must reside on our shores. The Home Ministry and the government must fulfil this promise made openly to the nation. Malaysians are waiting to be rid of the menace of illegal immigrants around us. No modifications, no compromise, please! The government must honour its pledges to its people. Otherwise the government will continue to lose credibility.

A friend once responded to the slogan “Dijamin oleh kerajaan” by retorting, “Siapa nak jamin kerajaan?”

Please do not make this country a laughing stock to the outside world. Do not embarrass Malaysians with statements that are not honoured. The government’s failure is a slap on the face of every Malaysian. Being openly told “bodoh” isn’t pleasant at all.

John Inbaraj is an Aliran member based in Penang. This is his personal view.

Something about Kamala Harris in Malaysia 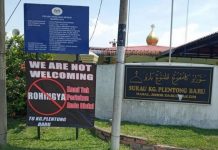 Hakam objects to home ministry’s taskforce due to conflict of interest, imbalanced representation

An illegal migrant friend of mine told me once that the illegals have no more fear entering the country illegally because they’d be given blessing eventually. True enough, many of them have now the license to roam freely due the the government’s desperation to grant legal status to these people for reasons known best to them.

And about the phone scam, i too called the perpetrators before to challenge their act and received the same feedback plus, according to them, they’re “well protected” in Malaysia. Huh !

The Home Ministry, it is an open secret (certain) officials from top to bottom are (allegedly) corrupted. They allowed China Dolls as masseurs cum …..? 99% migrant workers legally enter this country but were made illegals by their bogus employers. For information recruiting agents are illegal in Malaysia, no recruiting agency license were ever issued by the authorities. Why blame the migrant workers, they are victims of human trafficking patronage (allegedly) by Home Affairs Ministry with the illegal (alleged) collusion of Human Resource Ministry, Police, Immigration, RELA, SUHAKAM, AG Chambers and also MACC. You can see the BBC, Al Jazeera and CNN about migrant workers in Malaysia are human trafficking victims.

Please correct the BBC information if it wrong. According to that report the whole exercise of re registering the migrant workers was related to them hving become illegal because the agents and employers had not renewed their work permits for years. Apparantly according to that report the employers ( mainly owners of factories and restaurants) had paid the agents to have the permits renewed but they did not do it and those workers who came in legally became illegal migrants.That is why maids were excluded. Their individual employers saw to it that the work permits were renewed.

Can you imagine the sum of money which was due to the government through payments for the permits was lost.

I am not making an accusation and the BBC report may be wrong. But the Ministry must refute the comments of the BBC news report.