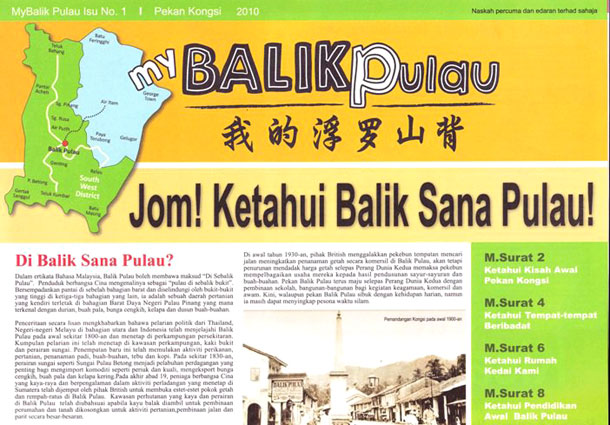 Toh Kin Woon defends those behind the myBalikPulau newsletter and says their creative efforts at promoting learning through the arts among the youth should be praised, not criticised.

myBalikPulau, a newsletter published by Arts-Ed, an NGO dedicated to the promotion of arts in education, has come under attack and criticism by Muhammad Farid Saad, the Penang State Assembly member for Pulau Betong, and several Malay groups since the beginning of February this year.

Many police reports have already been made and police investigations have begun. They claimed that the newsletter contains inaccurate historical facts and illustrations which insulted the Malays. They also asserted that the present State Government is behind the publication of myBalikPulau.

As a former State Executive Councilor for Education, I wish to make several clarifications related to Arts-Ed and the newsletter, myBalikPulau.

Launched in 1999, Arts-Ed was one of several initiatives undertaken by the then Penang Education Consultative Council (PECC), of which I was Chairman from 1997, the year of its establishment till 8 March 2008. Other projects include coping with learning difficulties; promoting continuing education; pre-school education; tertiary education; promoting interest in the learning of science and mathematics and vernacular education.

Since the inception of PECC, the Socio-Economic and Environmental Research Institute (Seri) has been appointed its secretariat. The key objective of Arts-Ed is the promotion of arts in education through the adoption of innovative and creative, largely non-formal, methods. Its projects were funded, though not exclusively, by the PECC through allocations given by the then state government.

Among the arts activities promoted include street theatrical performances, music of sound, photography, and appreciation of history through heritage trails and oral history. The last-mentioned hopes to raise the awareness of students in the age group from 10 to 19 of Penang’s rich historical treasure through appreciation of the state’s manifold heritage.

Two projects were already identified by Arts-Ed for approval, funding and implementation during my tenure as Chairman of PECC under this heritage education project. They are Anak-Anak Kota, which was carried out very successfully in the inner city of George Town, and myBalikPulau, which was launched personally by me in 2006, in Balik Pulau. The newsletter, myBalikPulau, which also received funding later from the Penang Tourism Action Council and DiGi during the tenure of the previous government, is the output of the heritage project carried out in Balik Pulau.

In all its activities, Arts-Ed’s aims have always been to promote learning through the arts such as theatrical performances, photography, drawing, workshops, research and documentation, visits to inherited architectural sites, and interviews with citizens in the crafts and old human settlements. Their work has always been, and still is, of the most creative sort, thereby stimulating learning in the young, whose backgrounds cut across all racial and religious boundaries.

I therefore find it most objectionable and shocking that Muhammad Farid and several Malay groups could assert that the newsletter, myBalikPulau, had writings and illustrations that insulted the Malays. I have personally gone through the newsletter and have found no substance to such allegations. On the contrary, it was a well researched document that contains the writings of the talented young of all ethnic communities based on their oral history.

They, and of course Ms Janet Pillai and her entire team at Arts-Ed, should all be congratulated on a fine effort. Indeed, Janet and her team’s passion and commitment to the promotion of the arts in education among all races, have long been acknowledged by members of the PECC. Having worked with her in the PECC, I can say with some confidence that the standard of the arts in the state of Penang has been raised as a result of the work of Janet and her team in Arts-Ed. This would not have been possible, had we just relied on the formal school system which has long neglected the arts. Unesco has acknowledged her work as much by inviting her to conduct regional workshops to train trainers in arts-ed.

I would like, in conclusion, to once again stress that myBalikPulau project is a heritage appreciation project covering heritage trails, photography and oral history by young schoolchildren from all ethnic communities, which was initiated, launched and funded by the PECC under the previous state government. The present State Government is not involved. As the former Chairman of PECC, I am proud of the work of Arts-Ed led by Janet Pillai, as indeed I am of the work of other committees such as on learning difficulties; pre-school education; continuing education; promoting science and mathematics education, Chinese and Tamil education and tertiary education. Over its more than a decade of operation, PECC has nurtured many ideas that were later realised, thanks to the commitment and passion of its members.

I am of the view that those who have accused Arts-Ed and the current Penang State Government of having insulted the Malays through the publication, myBalikPulau, have been most unfair to the many who have come forward voluntarily to serve the cause of education in the state. They have also hurt the feelings of the many students who have put in so much effort in the production of myBalikPulau. The participation of these students was driven and motivated by nothing more than the genuine desire to seek knowledge. They clearly had no intention of belittling any one community.