Gone are the days when Gerakan had brave lions and wise leaders such as Syed Hussein Alatas, Tan Chee Khoon, V David, and in recent times, former member Toh Kin Woon. Today the party looks like a dying horse or even a dead horse, says Martin Jalleh.

Gerakan’s president Koh Tsu Koon continues to preen and strut around on the political stage like a peacock, and ignores the protruding truth that he looks more like a turkey whom Umno will turn into a stew one day.

Tsu Koon, described by his critics, especially during his tenure as the Chief Minister of Penang, as Umno’s lap-dog, appeared recently at a Penang Gerakan extraordinary general meeting (EGM) which he initially insisted he would avoid.

The EGM was meant to push for a motion of no-confidence against Penang chief Teng Hock Nan, whom many members feel have been hibernating like a hedgehog since Gerakan lost all its seats in Penang in the last general elections.

Tsu Koon turned up to cast his vote for his close ally who had a close call, prompting many to wonder whether it was time to “close shop”!  The slim majority was a slap in the face for the more-mouse-than-man president, who naively expected everyone to “close ranks”.

Ever since the rakyat rejected the Gerakan in the last elections, many of its members felt that they were like dead ducks led by both a “rotting fish head” so afraid to rock the boat,  and rudderless leaders who are like roosters striking at each other whilst crowing reforms!

This latest controversial EGM in Penang and the initial decision by Tsu Koon not to stop it nor attend it, resulted in former Gerakan president Lim Keng Yaik resigning as party “advisor” whilst likening his former protégé to an ostrich.

Keng Yaik accused Tsu Koon of having a “see no evil” attitude and of constantly “burying his head in the sand” when faced with party problems and of “bringing the party to the dogs”.

Many Gerakan members are embarrassed by the memory of how Tsu Koon had shamelessly chickened out of his initial daring and dramatic promise of not accepting a Cabinet post if he were to lose in the 2008 general elections.

The man sheepishly entered the Cabinet by the backdoor and remains every day at Umno’s front door as a lame duck to quack at its behest! It appeared that he was more interested in his Cabinet post than saving his party.

Indeed, for Keng Yaik the straw that broke the camel’s back was Koh’s nonchalance over the EGM. The former party president of 27 years insisted his decision to resign was final for it was “pointless to stay on as advisor under its current leader”.

Koh was bird-brained to choose to attend MCA’s AGM instead of the Gerakan EGM on Oct 10 which was also the anniversary of the MCA’s EGM which saw its previous president losing a no-confidence vote! He would later declare that he would be attending a BN Youth meeting instead!

Keng Yaik said he would have “taken the bull by the horns” and “met with these fellows before the issue came out in the papers”. By allowing the EGM to take place Koh was opening the door to Gerakan committees in other states to parrot Penang.

It is an open secret that the crisis in Gerakan Penang has its roots in events just before the 2008 general election when its leaders sunk their teeth into each other’s throats for the chief minister’s crown. Nothing has changed since then.

Anil Netto puts it so well: “Now, as vultures circle overhead the writhing carcass in its throes that is Gerakan today, the ludicrous fighting over positions continues…But what are they fighting for, when the party is about to vanish into the mists of history?”

The turn tail president who was initially speechless for his perceived spinelessness eventually decided to accept his mentor’s resignation but went on to make him the party’s sacred cow by appointing him the chairperson of the Gerakan Life Members Council (a move which Keng Yaik had predicted)!

But Keng Yaik is no innocent lamb. If Tsu Koon is Umno’s lap dog, Keng Yaik is equally a lackey of Umno. They are both birds of a feather who have taken flight from the original vision and the high ideals of Gerakan and should share the blame for the party’s failure in the last general election.

Some went on to accuse Keng Yaik of crying wolf. Others said he was not a sly old fox but only interested in ensuring that his son will be president one day! Some felt it was his fault if the man he had groomed has turned into a goose.

Some said Keng Yaik was still as hungry as a wolf and had a personal agenda. They welcomed his decision to resign. They added that many of his people including his brother still hold top posts in the party. So it really made no difference whether he resigned or not.

There were those who in blasting the old man came off as blind as a bat. A leader asked Keng Yaik: “Why get so upset and behave as if the sky is falling down?”  This is a little tragic especially coming from a member of a party which was unable to see the earth opening up from under its feet.

Gone are the days when Gerakan had brave lions and wise leaders such as Syed Hussein Alatas, Tan Chee Khoon, V David, and in recent times, former member Toh Kin Woon. Today the party looks like a dying horse or even a dead horse which its leaders enthusiastically whip from time to time.

There are very few eager beavers left in Gerakan. The party is made up largely of members who have been in the party for donkey’s years and who choose to remain in the doghouse; some are like squirrels running in circles, and still others who prefer to continue their monkey business there. 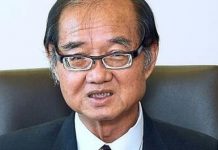 Is Gerakan serious about supporting public transport in Penang?

Let us all talke face-to-face. Dr Koh Tsu Koon has a absolutely boyish face even though he is well past fifty. Such a face is very endearing to the people of Penang. It shows youth and innocence – a symbol of freshness and vigour. The face of the late Dr Lim Chong tells the people of Penang, he had been battle-hardened and knew very much about the world. If anyone had known Dr Lim well, he would know that Dr Lim was instrumental in getting the late Tun Razak to meet China’s Chairman Mao and Prime Minister Zhao En-Lai in the early 70s. Who could have carried out such feat if the person did not have all the right worldly connections. Dr Koh belongs to the postwar generation whose life was very much sheltered and safe. Therefore it would be unreasonable to expect Dr Koh to have the tenacity and gumption like the late Dr Lim. The environments have changed, and Dr Koh does not the benifit of the conditioning. Thus Dr Koh has never been pushed to act or react in a way the late… Read more »

Why does Koh Tsu Koon behave as he does? He is a highly educated person yet seems to have lost any principles he may have had. He acts like … terrified … incapable of making his will as a leader felt. Perhaps he has been threatened by exposure of past sins and if this is so, he must admit it all and resign. As he is now, he is unable to do much for his party. I am amazed why the members won’t sack him.