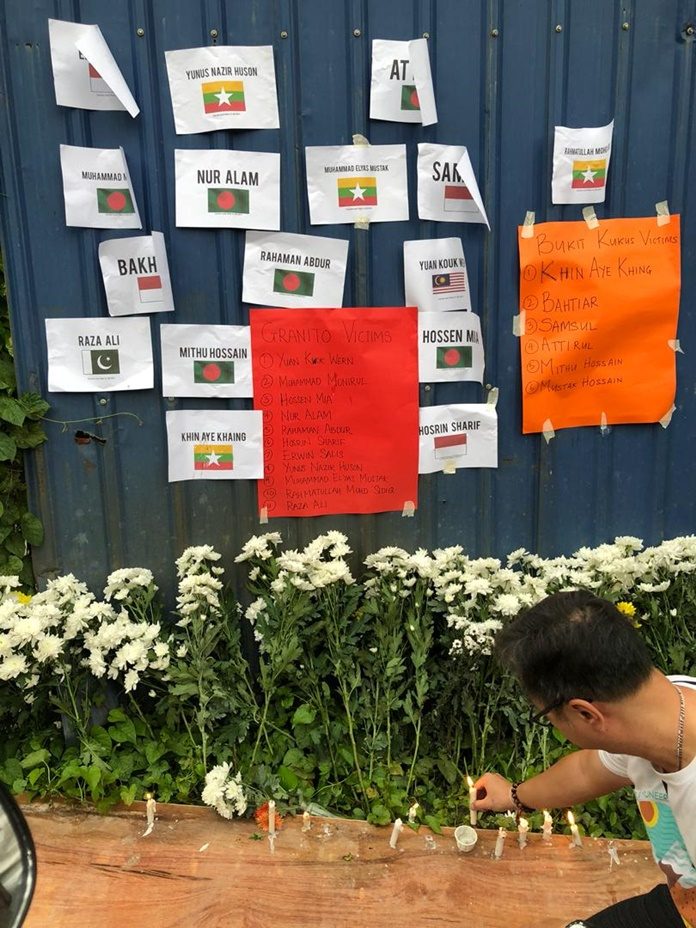 Things can only get worse if the mega proposal for Penang transport infrastructure is implemented as it stands, says the Penang Stop Human Trafficking Campaign.

There is not a lot to add to the recent reactions to the horrific landslide at Bukit Kukus, Penang.

It is as though we are back one year ago, repeating exactly the same outrage, excuses, hand-wringing and promises that followed the burial of workers in the mud and earth of the landslide at the Granito, Tanjung Bungah construction site.

If we read the press comments that followed that landslide, they are almost word for word the same as the reports ongoing now, following Bukit Kukus. We have learned nothing and done nothing. And it is the workers who have paid the ultimate price, and their families left bereft and in mourning.

In our rush to ‘develop’ our Penang state, we seem to have lost any semblance of what ‘development’ and ‘progress’ might mean. We no longer seem to care about the protection of our environment: we watch as one man-made disaster after another kills people, floods thousands of homes, seriously affects local economies and leaves infrastructure like airports underwater.

The human costs and the financial cost are incalculable (what is a life worth? what is the stress and horror of having your house flooded and your belongings lost?) but still nothing changes. In fact, things are arguably worse.

The environment is one thing; our treatment of our workers, especially migrant workers, is something else. The way we have managed to utterly marginalise such workers, reducing them to little more than incidental dots in our rush to ‘development’, has meant that no one in authority seems to care at all about how women and men migrant workers are contracted, housed and protected.

Support the struggle to build a Malaysia based on Justice, Freedom, Solidarity:
READ MORE:  Is it Shahidan’s job to plug potholes?

The catalogue of abuses suffered by the workers are consistently reported by groups like the Migrant Workers Right to Redress Coalition, the Bar Council and others, and consistently ignored by the authorities (and of course, the developers).

The fact is that where there is little protection of workers, little monitoring of terms, conditions, health and safety, and no priority at all in taking action to better value and protect human lives, human trafficking and modern day slavery flourish. It is no coincidence that Malaysia is making such little headway in combating these evils.

Following last year’s landslide at the Granito site, calls were made for the official inquiry into that tragedy to include examining the whole issue of how the construction industry employs workers. Many of those who died were subcontracted workers, even sub-subcontracted, many undocumented, and many hired day by day. Two were refugees.

No one seemed to want to take responsibility, and certainly no one in authority was in the slightest bit interested in cleaning up employment practices so that all workers were and are properly insured, housed and protected.

The appalling condition of housing at construction sites has been a scandal for years; but no one wants to address this. The photos of the prefab housing smashed by the latest landslide might wake some of us up but we hold little hope that any action will be taken by those whose job it is to protect people.

How good it would be if the Penang state government announced an official inquiry into the terms and conditions of migrant workers across the state, starting with the construction industry.

READ MORE:  Is it Shahidan’s job to plug potholes?

How wonderful it would be if the crucial hard work, contributions and sacrifice of migrant workers were acknowledged and celebrated by Penang state government officials, instead of denigrated.

How fantastic it would be if demands for the protection of the rights and security of all workers were seen to be in need of urgent overhaul and the necessary major changes made.

It is possible that the work of the recently appointed national independent Committee on the Management of Foreign Workers will result in some changes; we hope.

But meanwhile in Penang, the lack of any effective action in the one year since Granito has exposed the extent of negligence and indifference across the industry and the local authorities. More ‘development’, more profits, never mind the costs to expendable migrant workers, to local populations or to our environment.

This can only get worse if the mega proposal for Penang transport infrastructure is implemented as it stands. More workers will be killed; more hill slopes will be cut. We can anticipate more headlines, more floods, more ‘disasters’, more deaths, more hand-wringing, more excuses.

In this context, what does ‘development’ mean exactly? When will the deaths, disasters, negligence and indifference stop?