Under the mixed-member proportional system, everyone gets to share the candies – as opposed to one person hoarding them all and leaving none for others. Azmil Tayeb writes.

Imagine playing a game where we look for hidden candies and whoever finds the most candies wins. I guess it is like the Easter egg hunt for those who are familiar with the Christian tradition in the West.

The only major difference is that in this imaginary game, the winner not only gets to keep his or her collection of candies but also gains the rest of the candies from other players whether they like it or not. It is the winner-takes-all format. Either you win all or you lose all. There is no consolation prize.

Our electoral system in Malaysia is exactly like this imaginary game. Malaysia practises the first-past-the-post (FPTP) system, under which a candidate who gets the most votes wins even if the candidate does not get a majority of the votes, ie winning only by a plurality.

But candidate B actually received only 40% of the votes cast while the majority of the voters (60%) did not support him/her and were therefore denied representation. Is this fair? Unless you were candidate B or among supporters of candidate B, you would not think it is fair for those who cast their votes for candidate B’s opponents.

This phenomenon is what the prominent Malaysian election specialist Prof Wong Chin Huat terms as “wasted votes”. In the above scenario, 60% of votes were ‘wasted’ due to the winner-takes-all format of the FPTP electoral system. The current FPTP system, according to him, is not suitable for a multi-ethnic society such as Malaysia’s: it contributes to widening ethnic polarisation, not just between ethnic groups but also within a single ethnic group, where a particular ethnic group’s votes in a constituency are divided among two or more ethnic-based political parties. Wasted votes breed resentment.

We can see the potential for wasted votes in open display as the Sabah state election campaign unfolds. The Election Commission received 447 nomination papers from candidates contesting in 73 state seats. That is an average of a whopping six candidates competing in a single constituency! A couple of extreme examples: the Bengkoka district is witnessing an 11-cornered contest while the Inanam district is embroiled in a 10-cornered fight. While many of these candidates will not make much of an impact and will most likely lose their deposits, many votes will still be wasted in the election.

So how can we minimise wasted votes? The Electoral Reform Commission, formed by the then-Pakatan Harapan government and of which Prof Wong is part, recommends among others that the present FPTP system be changed to some form of a proportional representation (PR) system. A PR system means a party would receive a share of the seats in roughly the same proportion as its share of the votes in the election. Simply put, if party A wins 30% of the votes, it will get about 30% of the seats in the legislature.

There are of course various types of PR electoral systems ranging from mixed member proportional (MMP) system such as the one practised in Germany to the tedious single transferrable voting system found in Australia. For the sake of discussion, let us consider the MMP system.

Basically, each voter will have two votes. The votes for individual candidates will be counted using the FPTP winner-takes-all format, while the votes for political party will be counted using the PR format. The first choice of legislative seats will go to the winners of the first vote (individual candidates) and the rest of the legislative seats will be divided among political parties based on the percentage of votes they receive (second vote). Take a look at a sample of an MMP ballot slip (top) in Germany in which we can see the two different votes.

The MMP system will be a vast improvement over the current FPTP system we have in Malaysia now. It does not need additional legislative seats as that will require a constitutional amendment, which is an exercise in futility in the present politically polarised climate.

The change to an MMP system only requires that the present number of legislative seats be reconfigured to individual candidates and political parties. This will not be a simple task to accomplish, but it is still worth an effort as it benefits all major parties regardless of whether they are in power.

READ MORE:  Which electoral reforms should be implemented before the next general election?

The MMP system will not only slash wasted votes but also reduce inter- and intra-ethnic rivalries between political parties. Electoral losers will still receive consolation prizes and get the chance to wield some influence in the legislature, be it the state assembly or Parliament. There will be less reason to resent each other.

My experience conducting research in Kelantan showed that many voters have already split their votes between Pas and Umno. It is what the locals called “undi kangkang”. They would vote a Pas candidate for the parliamentary seat and an Umno candidate for the state seat.

If the MMP system is in place, these voters can vote for a Pas candidate and Umno for a single seat. It will be a win for both parties at the state and national levels. It will also ease inter-party tensions in seat negotiations within the coalition. It also means that politically under-represented demographics such as women and Orang Asli can be selected as representatives by political parties through the second vote.

In the end, under the MMP system, everyone gets to share the candies, albeit in varying proportions, as opposed to one person hoarding them all and leaving none for others. What’s there not to like?

Which electoral reforms should be implemented before the next general election? 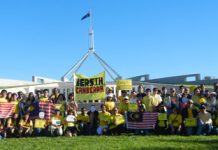 Youth in electoral reform and politics: Why do we matter?

Any system which maynot be beneficial to the leadership in power may be rejected immediatly wheresas any system which benefits those in power may be accepted and approved for implementation almsot immediatley.
EXAMPLES MAY INCLUDE THE FOLLOWING:
[a] INCREASING THE NUMBER OF CONSTITUENCIES WHICH BENEFIT MORE PARTY’S LEADERS VIA LARGER NUMBER OF ELECTED REPRESENTATIVES,
[b] E-POLL SYSTEM OF VOTING IN THE CORPORATE SECTOR,
[c] VIRTUAL MEETINGS whcih may result in less questions by members.
[d] LOW INTEREST RATE BENEFIT BORROWERS but PENALIZES SAVERS

Azmil, I trust your assessment that the MMP system is within the realm of doability in our country if there is the political will.
As such this can be listed to the list of sins of omissions by the deposed PH govt. – it should be a matter of priority in its 22 months rule.
This current backdoor govt. will definitely have no interests in electoral reforms for our country.