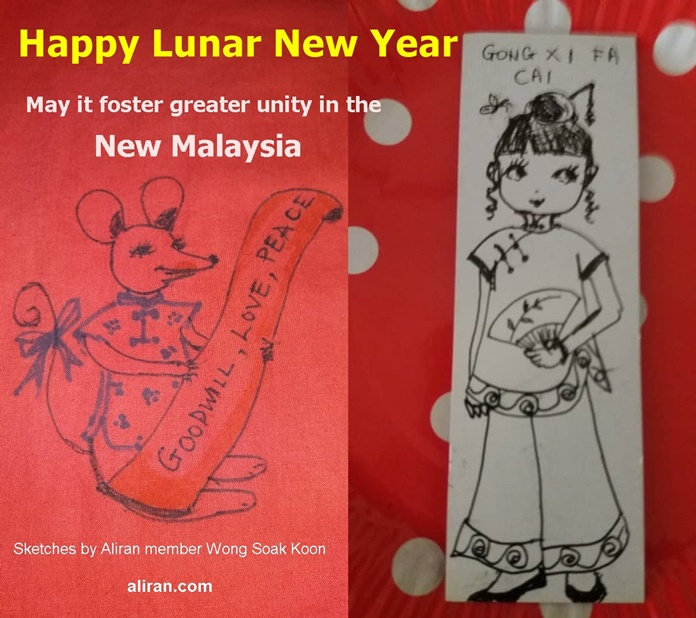 Ahead of the Lunar New Year, Henry Loh reflects on a series of breaking news episodes that raised eyebrows.

First, Aliran is organising a workshop in Penang on Basic Graphic Design to Publicise Your Events which might interest you. This workshop is aimed at civil society activists and NGO volunteers involved in promoting their events. Seats are limited; so register now.

So… we are already moving into the third week of January, and already it is hard to keep up with all the “breaking news” in our beloved country.

On 3 January Malaysians received news of Education Minister Maszlee Malik’s resignation from the cabinet. At the press conference announcing his resignation, Maszlee said, “On the advice of Dr Mahathir – who is a father figure to me, a leader and a great statesman – I, Maszlee Malik, with a calm yet heavy heart, return my position as Malaysia’s education minister to the prime minister.”

Subsequent reports confirmed that Mahathir had, in a letter to Maszlee dated 27 December, advised him to resign as Education Minister. Apparently, one of the reasons was that Maszlee had defied cabinet directives on “the teaching of Jawi in schools, free internet service and the free breakfast programme”.

Unfortunately for Maszlee, many in Malaysia irreverently and mockingly referred to him as the “black shoes minister”, following his decision very early on during his tenure as education minister to allow pupils to choose the colour of their footwear – that is, either black or white. (Mahathir, as the current acting Education Minister, has somewhat sarcastically announced he would now allow students to wear shoes of any colour, not just black or white.)

To be fair to Maszlee, a closer scrutiny of his 20-month stint as minister will reveal that he worked hard to carry out some positive reforms and much-needed change in the education system. An official from the Socialist Party of Malaysia (PSM) credited Maszlee for his work in, for example, ensuring better access for disabled school children. Maszlee had also looked into the plight of contract workers in schools – the cleaners, gardeners and security guards – by agreeing to work with the Government Contract Workers Network (JPKK).

Support the struggle to build a Malaysia based on Justice, Freedom, Solidarity:
READ MORE:  Reforming the MACC: Current issues, obstacles to progress, and way forward

Francis Loh has contributed some ideas on how to improve Malaysia’s ailing education system. This prompted several readers to respond – and you may also respond here. Clearly, much needs to be done, and Mahathir, as long as he is acting Education Minister, should urgently usher in serious reforms. A national education blueprint already exists, and now it is time to make tough decisions to implement its proposals. The ministry, in revamping the education system, should focus on promoting a values-based education system, improving the quality of education and allowing autonomy and accountability in the system.

The police are now investigating the authenticity of the recordings, and if the results are positive it would imply that there had been a criminal conspiracy at the highest levels of government to pervert the course of justice in relation to the 1MDB and related financial scandals.

We in Aliran have noted the reactions of certain individuals, lawyers and the Bar Council. Some of them questioned the MACC’s move in releasing the recordings to the public, suggesting its action were tantamount to trial by media and could be deemed sub judice, perhaps in contempt of court. There was also the whole question of the invasion of privacy.

In weighing the serious nature of the contents of the recordings and how they are definitely of public interest, we feel the MACC was acting in pursuit of justice and accountability. The MACC action has also received the support of the veterans’ group Patriot, which urged the police to investigate the recordings and ensure the personalities involved were questioned and brought to justice if there is sufficient evidence..

The next ‘breaking news’ – though perhaps less shocking and unexpected – was the Barisan Nasional’s victory in the Kimanis parliamentary by-election on 18 January 2020 over Warisan, a Pakatan Harapan-friendly party. Some are arguing that the result is a protest message to the ruling PH government.

Anil Netto points out various reasons why Kimanis voters may have favoured the BN candidate. Normally the loss of a by-election is not something extraordinary, but the loss at Kimanis is the fifth by-election defeat on the trot and is especially concerning after PH’s major loss at the recent Tanjung Piai by-election in Johor.

It would seem that many East Malaysians, like their counterparts in the peninsula, are upset that the government has not yet fulfilled many of the promises made ahead of the 2018 general election. The share of oil royalties remains a major sore point. The proposed issuance of temporary resident passes for undocumented immigrants in Sabah has also annoyed the locals.

In Malaysia, particularly in the peninsula, ethno-religious tensions and misunderstandings have apparently worsened since the PH government took over. Although the PH government should not be blamed for this situation, we believe peace-loving folks of all religious and ethnic groups expect leaders to come up with concrete measures to promote greater understanding and harmony in the country.

Even taking part in a Ponggal (Indian harvest festival) celebration could be problematic for Muslims, if a circular issued by the Ministry of Education is anything to go by. In it, the ministry described the Ponggal celebrations as a religious festival, explaining that, according to the Malaysian Islamic Development Department (Jakim), it is “haram” (forbidden) for Muslims to take part in any religious activity of other faiths.

Malaysian Hindu Sangam president RS Mohan Shan, however, stressed that Ponggal is a cultural celebration, and there is nothing religious about it. Minister in charge of Islamic affairs Mujahid Yusof Rawa then announced that stern action would be taken against the education official who issued the circular for distorting the contents of Jakim’s letter.

It is good that Mujahid is trying to correct a wrong interpretation, and it will help to improve relations between Muslims and those of other faiths. Unfortunately, the damage has been done. It is sad and ironic that in an age when we should be building bridges and creating better understanding among the various ethnic and religious groups, we find people intent on erecting walls instead.

We would like to see leaders making more firm, forthright decisions to resolve any inter-ethnic and inter-religious misunderstandings as soon as they arise. We also want to see them putting in place more concrete measures to promote closer understanding and empathy among people of different faiths. As Azmil Tayeb said in a recent Aliran newsletter, we need to move away from merely being tolerant of one another, which is inadequate and insufficient. We should instead work towards having more empathy for all our neighbours, irrespective of their ethnicities and faiths.

It is in this spirit that we in Aliran would like to wish you – whatever your ethnicity or religious belief – a most happy and meaningful Lunar New Year. May the Year of the Metal* Rat bring us all closer to one another and make the people of Malaysia strong and united.

* The sequence of 12 different animal years in the Chinese zodiac rotates among the five elements of nature (wood, fire, metal, earth and water) over a 60-year cycle.