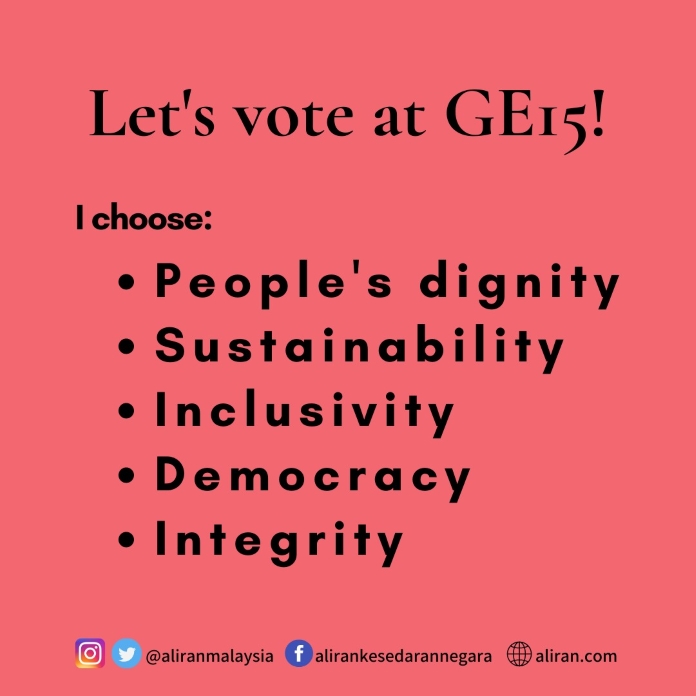 For the past few general elections since 2008, many of us have experienced the ups and downs of Malaysian politics.

On 19 November, we will face an unpredictable general election. In the past, it was mainly two electoral coalitions competing for the 222 parliamentary seats.

This time, Barisan Nasional, Pakatan Harapan, Perikatan Nasional and Gerakan Tanah Air are contesting mainly in the peninsula while Gabungan Rakyat Sabah and Gabungan Parti Sarawak will put up candidates in East Malaysia. The leaders of the three major peninsula-based coalitions – BN, PH and PN – have all had experience in government.

Despite some excitement over the polls, many analysts and activists are concerned about a low voter turnout despite a jump in the number of new voters.

The flood season has prompted such concerns. Several surveys suggest many are experiencing political fatigue and have low confidence towards the law and policymakers, adding to the uncertainty about whether they will bother to vote.

Many are also anxious over whether overseas postal votes will arrive at returning offices in Malaysia in time.

That said, look at the excellent mobilisation of volunteers to address this concern.

The delivery of postal votes played a role in the watershed 2018 general election, which PH won against the odds. Dozens of volunteers flew into Malaysia from across the world with suitcases filled with ballots to convey them to their intended destinations by the end of polling day.

The same mad rush to deliver postal ballots is once again taking place this year. Whilst it is unfortunate that this issue has not yet been resolved entirely, the mobilisation of volunteers is admirable.

Despite troubling political trends across Malaysia, critical moments in recent electoral history have united diverse groups to act in solidarity. These events have enabled people’s mobilisation, which has the potential to transform Malaysia’s politics significantly.

Apart from the efforts of Undi18, Bersih and Global Bersih, many others have come up with initiatives to ensure that more people are able to vote and that postal ballots arrive on time.

For instance, UndiBanjir (previously known as UndiRabu) provides a platform for overseas Malaysians to assist voters.

Some civil society groups provide carpool services for out-of-town voters while others educate the public on the electoral process.

Such people-led initiatives deserve applause. Regardless of the uncertainties, we can build on this challenging moment and create a new vision for our country.

This task will not be easy, nor will the results be immediate. However, these citizen-led initiatives should inspire all of us in the run-up to polling day and ensure that all of us are able to cast our votes and exercise our right and our responsibility.