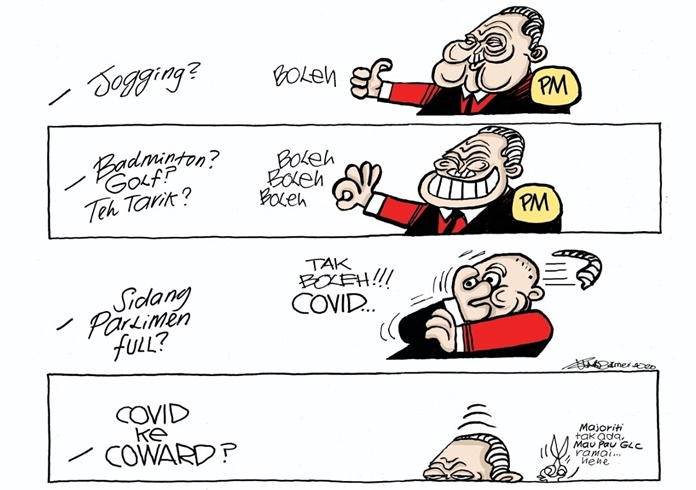 The government must not deny the people the democratic right to demand transparency and accountability, Mustafa K Anuar writes.

It is crucial that we make every effort and explore every means to prevent the raging coronavirus in our country from further unleashing its deadly venom.

We have already seen the number of deaths and the human suffering that lay in the path of the coronavirus.

It is disconcerting enough to remember what happened two years ago. When Pakatan Harapan took over the federal government, Malaysians were jubilant and filled with hope that a new Malaysia was dawning and that democracy would grow stronger.

But, as we know, the euphoria was short-lived: the “Sheraton Move” in February this year triggered the collapse of the PH government. This was about the time when the menacing coronavirus was taking a foothold in the country.

MPs need to discuss and debate important issues, such as the way funds were used to help the bottom 40% group of households and small and medium-sized enterprises and to meet rising healthcare costs. They also have to look into the alleged discriminatory distribution of food aid for the vulnerable.

Parliamentarians must explore strategies to tackle the impending recession, which will affect most people, especially the poor.

In short, the present administration, which the less generous have labelled a “backdoor government”, has to account for what it has done and will do during this pandemic. It must not deny the people the democratic right to demand transparency and accountability in its administration.

Surely, the prospect of facing the opposition in Parliament should not rattle Prime Minister Muhyiddin Yassin and his government, especially when the PN government claims to have a comfortable parliamentary majority.

If social distancing cannot be enforced effectively because of the limited space in the Parliament, some MPs can still participate online or through CCTV, as has been done elsewhere in the world.

We in Aliran were so dismayed by the government’s intention to have only a one-day session that we launched an online petition calling on the government to extend the parliamentary sitting to two weeks. Over 70,000 people have already signed the petition. Have you? You may do so here.

Meanwhile, the authorities’ actions have taken its toll on undocumented migrant workers in the country. Senior Minister Ismail Sabri Yaakob recently declared that undocumented migrants in areas under an enhanced movement control order would be sent to the Immigration Department.

His statement suggests that he has gone back on his word. Just two months ago, he had promised undocumented migrants that the government would not arrest them for being undocumented in the country.

Such a turnaround has put undocumented migrants in jeopardy; if they voluntarily turn up for Covid-19 screening, they risk finding themselves hauled up by the Immigration Department.

This would surely prompt other undocumented migrants to go into hiding for their own “safety” and frustrate the Ministry of Health’s attempts to detect, screen and isolate clusters to contain the spread of the coronavirus. These migrants include the very people who have helped built our nation in various ways. We must all acknowledge that their health is public health too.

If the coronavirus strikes more undocumented migrants, the new clusters may well outstrip the already stretched resources of frontline healthcare staff who have relentlessly battled the pandemic.

An element of human compassion is crucial here. Like desperate, vulnerable Malaysians, undocumented migrants should be accorded the human decency they deserve, including the necessary healthcare and other basic needs. All the more when money is scarce because of job losses arising from the movement control order.

Now that we are in the holy month of Ramadan, let’s remember that Muslims are called not only to observe piety but also to be generous in their compassion towards the vulnerable.

It is also time for this predominantly Malay-Muslim government to adhere strictly to the values of justice and compassion.

Those who are found breaching the movement control order should be penalised accordingly, in the interest of justice. But first-time offenders should not be penalised more excessively than frequent ones.

Equally important, there should be no double standards in sentencing. “Commoners” and the elite class must receive similar penalties. Otherwise, it would only invite a mockery of the justice system.

While violating the movement control order would indeed be wrong, offenders should not be denied their human right to fairness and justice.

To fellow Muslims, have a blessed Ramadan, and to all Malaysians, stay safe.