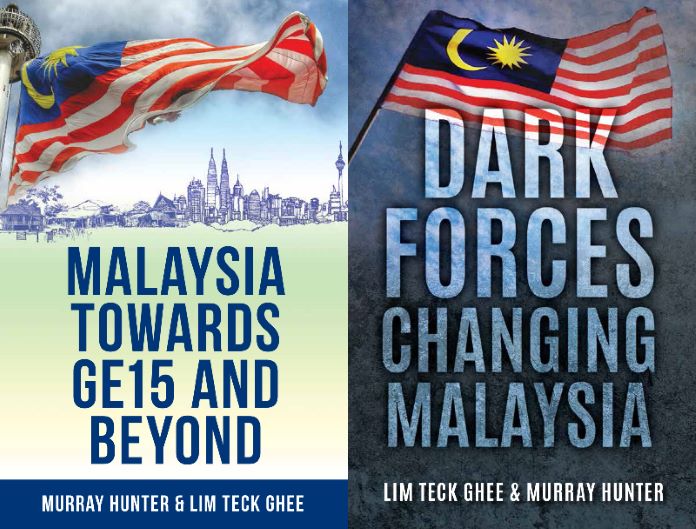 In this collection of 34 essays, Teck Ghee and Murray mince no words in examining a protracted crisis that has long bedevilled Malaysia – its twin problems of race and religion.

The authors will be no strangers to Aliran readers. Both have been sharp and hard-hitting social critics.

Teck Ghee, who was my colleague at University Sains Malaysia, had an illustrious academic career, including as professor of the Institute of Advanced Studies at the University of Malaya. He later served at the World Bank and as policy adviser to the UN.

Co-author Murray is a well-known entrepreneur, researcher and writer, who has lived for decades in Malaysia.

The book leads with Teck Ghee’s 2011 essay “The gathering storm”, which lays out all the major socioeconomic challenges afflicting the country, which he says are still its underlying problems:

Ten years later, despite much sound and fury – including a short-lived change in the government and the ongoing reshuffling of the old guard in Malaysian politics – the many challenges in the nation’s socioeconomic life and development, outlined in the paper, remain undealt with or mismanaged.

One of its egregious failures was Malaysia’s reluctance to ratify the International Convention on the Elimination of All Forms of Racial Discrimination. Malaysians will recall how Umno orchestrated a massive protest against the ratification on 8 December 2018, pressuring the Pakatan Harapan (PH) government to cave in and abandon its espousal of the convention.

His essay on the “mythical” social contract lays bare the debilitating narrative of racial politics delivered in the 1986 speech of the late Umno politician Abdullah Ahmad, who first floated the idea of “ketuanan Melayu” (Malay dominance).

Abdullah’s allusion to a “sacrosanct social contract”, which he said guaranteed Malay dominance, has been the unspoken cardinal principle of Umno politics.

Such a narrative, as Teck Ghee shows in subsequent essays in the volume, doomed Malaysia to policies which multiplied and intensified racialism.

This scenario has been epitomised by the continued bloated civil service, populated almost entirely by Malays, the implementation of the New Economic Policy’s ethnically biased quota policies, most recently reintroduced in the “shared prosperity” vision of the PH government.

Teck Ghee sees this vision as no better than a perpetuation of old racial policies in new garb:

[I]t is highly probable that we will see a further augmentation and expansion of a long discredited racial preferential policy that can only end up with unpunished abuse, exploitation by the unscrupulous, connected and rich and powerful, and the greater marginalisation of the bottom strata of Malaysian society – including Malays.

Co-writer Murray darkens the horizon further by suggesting that Malaysia will become “A permanent ethnic Malay polity”. He attributes this to structural and institutional factors as Malay birth rates have far exceeded those of other racial groups and the first-past-the-post electoral system “ensures that only representatives with polarised views will win a majority in single-member constituencies”.

The book also takes the dim view of Islam engulfing Malays politics and sees the failure of the Malay middle class to overcome religious intolerance and to act as a catalyst of change.

[T]he dilemma for the Malay middle class is accentuated by the steady advance of a religious-centric socio-cultural order that is restricting the opportunities, freedoms and rights associated with the rise of the middle class in other parts of the world.

Malay dominance has led inexorably to the new narrative of bumiputraism, which reinforces ketuanan Melayu.

The new discourse incorporates the non-Malay indigenous peoples of the states of Sarawak and Sabah who are given “bumiputra” status.

READ MORE:  Beyond the call to end racial politics

However, as Teck Ghee writes, the term was not mentioned in the formation of Malaysia in 1963, nor does it carry any legal force:

The first official use of the term can be traced to the first Bumiputera Economic Congress held in June 1965. Following it, the term first appeared in Parliament when the Majlis Amanah Ra’ayat Bill was tabled in August 1965 to replace the Rural and Industrial Development Authority (Rida, 1953) as proposed by the said congress.

Therefore, demographics would favour a perpetuation of Malay dominance.

Both authors argue that the bumiputra term, which has no legal standing, has been used to reinforce Malay supremacy rather than to privilege the non-Malay bumiputra communities of the Borneo states.

Teck Ghee states that “this larger numerical contrivance has since been legitimised to provide a crucial and new reference point for measuring and assessing any and all aspects of life in the country”.

In Orwellian fashion, Teck Ghee cuts a sobering image of “Malaysia Day 2063”. As the country celebrates its 100th anniversary, the Supreme Minister of the new governing coalition of Supreme Pakatan announces that the “Bumiputera First” policy has achieved great success with only 10% of citizens not subscribing to the pledge: “I am Bumiputera First and Malaysian Second”.

This success was attributed to the Supreme Pakatan’s ultra faction, the Sons of the Soil Revolutionary Movement, driving a change in national consciousness after the great purge of 2025.

A dark future indeed, should this come to pass, with cultural and ethnic diversity effectively suppressed!

READ MORE:  Does anyone care about the auditor general's reports?

Another recurring theme of the book is Malaysia’s endemic corruption. Murray asks if government-linked companies are “development vehicles or corruption tools”.

Citing one example, in 2020 Syed Mohktar Al-Bukhary was given, without a competitive bid, the lucrative right to wire the country for 5G by Mahiaddin Yasin’s newly minted Perikatan Nasional government.

For Murray, Malaysian government-linked companies are largely rent-seeking entities which are mismanaged and inefficient.

Need we say that 1MDB was the mother of all corruption scandals by a government-linked company or sovereign fund, resulting in theft and embezzlement amounting to RM2.67bn.

The crippling corruption culture is found not just in the government sector but is prevalent in the private sector.

However, he did not mention that the current chief commissioner, Azam Baki, who was himself embroiled in a corruption allegation, had his case quashed by the government.

Not all will agree with everything written in Teck Ghee and Murray’s book.

But no one will deny that the authors have shown that a dark and deeply embedded Malaysian political culture of fake ethnic supremacy and debilitating and senseless religious intolerance, depicted by both authors, must be debunked before it is too late.

The fractious and divided Malaysian political class have failed Malaysians so far – so are we fated to a future of doom and gloom?

In this first volume, the authors have offered no solutions but in a second forthcoming volume, Malaysia Towards GE15 and Beyond, the two authors will show that hope for political change will rest on a younger generation of political leaders.