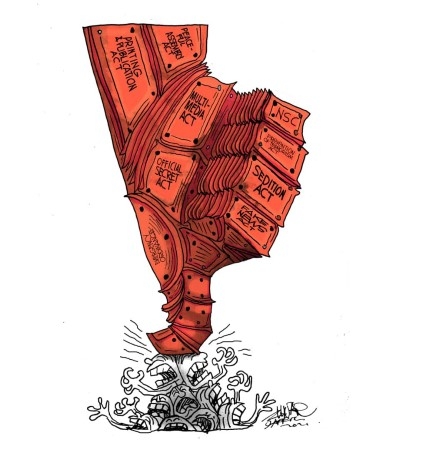 In their book How Democracies Die, Steven Levitsky and Daniel Ziblatt, both political scientists from Harvard University, argue that in our present era, it is not a violent military coup, putsch or counter-revolution that will ultimately bring down democracy.

Rather, the demise of democracy results from the slow dismantling of the various institutions that provide checks and balances central to a fully functioning democratic system. To paraphrase a line from TS Eliot’s poem The Hollow Men, the way democracy dies is not with a bang, but with a whimper.

We have already seen this democratic regression across the world in recent years – from Donald Trump’s America to Viktor Orban’s Hungary to Rodrigo Duterte’s Philippines.

Even the longstanding beacon of regional democracy, Indonesia, is currently experiencing its own democratic backsliding, especially after President Jokowi won a second term in 2019 and bagged over 70% of seats in parliament.

Democracy in Malaysia, meanwhile, has been regressing since the infamous Sheraton Move took place and ushered in the backdoor Perikatan Nasional government.

So, what does the slow death of democracy look like?

Typically, it starts with a charismatic demagogue being democratically elected to power. This demagogue thrives on highly divisive populist rhetoric, namely, in creating ‘enemies’ and pitting one group against another. Take Viktor Orban in Hungary. His popularity as prime minister rests on his ability to rouse the public against perceived enemies of the country such as refugees, Islam and EU technocrats in Brussels.

As soon as he assumed power in 2010, Orban quickly undid many of the crucial checks and balances that keep democracy functioning such as the legislative and judiciary branches, law enforcement agencies and the media. He installed his supporters in all key positions in government and the mainstream media and has used draconian laws, the police and pro-government vigilante groups to suppress opposition.

Democracy in Hungary has gradually declined since it joined the EU in 2004, so much so the country is now seen as a political outcast in the region, along with Poland, which has a similar right-wing populist government.

What about Malaysia? Surely our democratic health is not as critical as Hungary’s, you might think. Yes, we are democratically better off than Hungary – but only barely, because the present PN government is pathetically inept, politically fragmented, deeply unpopular and prone to infighting. The PN government does not possess the sort of ideological cohesiveness and single-mindedness found in Hungary, Poland and Trump’s America.

Take the most elementary component of democracy, the legislative branch. Since the pandemic began in late February last year, the Malaysian Parliament has only met twice: the first for a mere formality and the second to approve the 2021 Budget.

On 11 January this year, the PN government imposed a state of emergency, which effectively suspended Parliament until 1 August, purportedly to deal with the fast-worsening spread of the pandemic.

We all know the emergency was utterly preposterous to begin with. Unfortunately, we have been proven right by the alarming number of cases we are seeing now.

For example, a sitting Parliament would have been able to question why it costs RM70m to build a malfunctioning website/app for people to register for vaccinations. Or rather, do we even need an exorbitantly expensive website to vaccinate the population when advanced countries like the US, Germany and the UK do not even have it? Is the website merely a way for political cronies to profit from the pandemic? These are hard questions we could have asked the PN government had Parliament been open for business.

Also, as Parliament is closed, the focal point of political legitimacy has shifted from the democratically elected Parliament to the non-elected institution of the monarchy. Politicians of all stripes have been flocking to the palace to seek the King’s blessing for their particular political agendas.

The most recent example was when all heads of major political parties went to see the King to discuss a way to soldier on in this time of national crisis.

Yes, we badly need non-partisan solidarity to overcome the challenges brought on by the pandemic. But this political cooperation should be forged in the democratic cauldron of Parliament, where hearings are transparent and MPs are accountable to the people – not secretly behind gilded palace doors.

There is also a talk about establishing a National Operations Council (Majlis Gerakan Negara or Mageran), akin to the one set up in the aftermath of the 1969 racial riots.

This is another sign democracy is moving backwards. Malaysia does not need Mageran, as we do have a (barely) functioning government and a democratically elected Parliament, unlike the situation in 1969.

Instead, a non-partisan parliamentary select committee could be established to spearhead the effort to deal with the pandemic and its harmful fallout and provide oversight. The select committee’s discussions and findings would be transparent and open for debate in Parliament. Mageran’s activities, by contrast, would be beyond public scrutiny and accountability.

Other signs of democratic regression in Malaysia now include designating ‘undesirable others’ such as refugees and migrant workers as public enemies and prioritising corporate profitability over people’s lives.

The government’s decision to round up undocumented migrant workers and spray them with disinfectant (Dettol) is shamefully despicable and bereft of any humane compassion. The creation of enemies, as mentioned above, is a recurrent characteristic of a democracy in decline.

In the ongoing third lockdown (“MCO 3.0”), we also witness the power and influence of big businesses over government, another sign of democratic regression. We know that the biggest cluster of Covid cases comes from factories operating at full capacity. But many factories have been allowed to operate during this lockdown because they are deemed “essential services” even though many of them are not. In a functioning democracy, it is people who must come before profit, not the other way around.

Without parliamentary checks on the government’s actions, we the people need to do our part to fill the void. As public demonstrations are forbidden, we can instead take to social media to register our protests.

Hopefully, with enough public groundswell, we can steer the government into making decisions that benefit the people. The timely firing of the disgraced former chairperson of Prasarana, the obnoxious Tajuddin Abdul Rahman is a case in point.

We should prevent democracy from slowly decaying, which would be like – as Taylor Swift put it – “a death by a thousand cuts”.

Pursuant to Art. 145(2) of the Federal Constitution, the Attorney General is under a constitutional duty to advise the the parties specifically named upon such legal matters, and to perform such other duties of a legal character, as may from time to time be referred or assigned to him and to discharge the functions conferred on him by or under this Constitution or any other written law.

Why are PROVOCATEURS criticizing the A-G for exercising his duties PUBLICLY in a clear accountable & transparent manner?

The A-G has the Locus Standi constitutionally to advise etc. as Malaysia’s Principal Legal Adviser.

ALL DECREES MUST PASS THE CONSTITUTIONAL TEST

A number of Malaysians are totally immersed by decrees issued by personages in recent years and decades. Ever more so, after the Proclamation of Emergency.

Any Emergency Ordinance or Law does not suspend the operation of the Supreme Law of the Federation nor the Rule of Law. Foremost, Malaysia does not practice absolutism.

Decrees do not fall under the definition of law under Article 160(2).

As anyone can see, the recent March 2021 decision of a Court of Appeal Justice sitting in the High Court did not even take into consideration the issuance and contents of decrees.