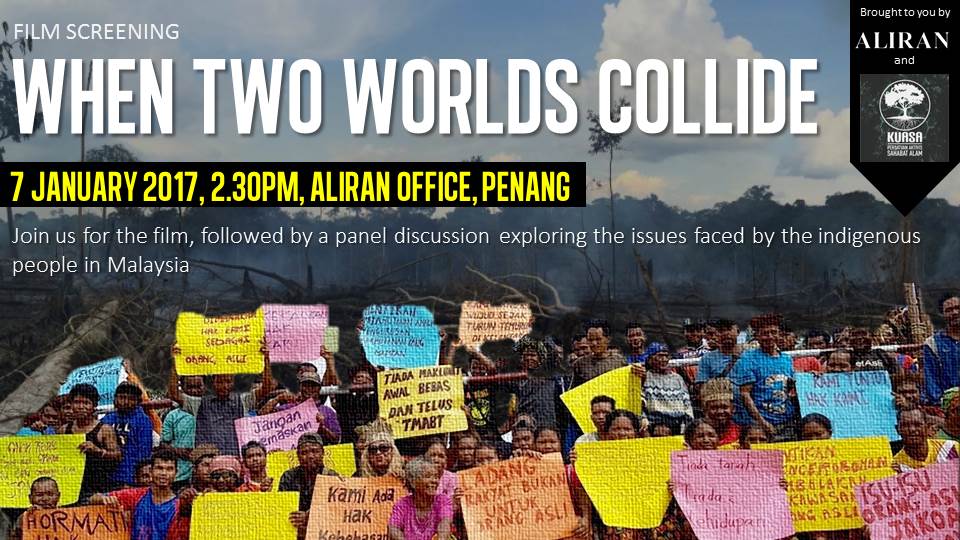 Wan Atikah WY places the recent Orang Asli logging blockade in the larger global context of the indigenous people’s struggle to protect their land – and our natural habitat.

Looking back at 2016, I willi remember it as a year when one of the most neglected communities, the indigenous peoples of the world, rose to make their voices heard.

It was also a year when world leaders pledged under the Paris Agreement to work together to make this planet a sustainable place for future generations.

In North Dakota in the United States, the Standing Rock Sioux tribe rose together to voice their disagreement and protest over the construction of the Dakota Access pipeline near the tribe’s reservation. The indigenous people’s collective voice and persistence in protesting brought them a victory when the Army Corps of Engineers announced that the work would be halted and that they would look for an alternative pipeline route.

In Gua Musang, Kelantan, the Orang Asli protested and formed blockades to stop a logging company from further trespassing and damaging their tanah adat (customary land). Through wide news and social media coverage, public consciousness over the issue heightened and the protest gained nationwide attention.

The blockades brought together Orang Asli and environmental activists from different corners to support the effort and to strengthen the resistance. Besides that, it also opened the eyes of the rakyat about Orang Asli rights, their plight and the significance of the protest to the rest of Malaysia and the world.

From a narrow perspective, it would seem that the Orang Asli protest was purely for the sake of protecting their own livelihood. But if one takes a broader view, it would be clear that their protest is crucial for all of us.

Support the struggle to build a Malaysia based on Justice, Freedom, Solidarity:
READ MORE:  Indigenous rights: The principle of free, prior and informed consent

Their persistence in the struggle to keep their tanah adat, their forest, is actually key in keeping Mother Nature in balance. The forest is their tanah adat and the world’s green lung. Protecting the environment helps preserve the natural habitat and ensures minimal ecological degradation.

As a result of mounting pressure on the local government and the logging company, the logging at Pos Gob, Gua Musang was brought to a halt. The decision to halt the logging is just a small victory. But it is a step forward and a big sign to us that People Power can help bring about change in Malaysia.

He saw a dead crow
in a drain
near the post office.
He saw an old man
gasping for air
and a baby barely able to breathe
in a crowded morning clinic.
This land is so rich.
Why should we suffer like this?

I want clean air
for my grandchildren.
I want the damned fools
to leave the forest alone.
I want the trees to grow,
the rivers to run free,
and the earth covered with grass.
Let the politicians plan how we may live with dignity,
now and always. – A Samad Said

The Dead Crow was written by A Samad Said based on his observation of the state of Nature 25 years ago. At the end of 2016, we are no better than the situation described in the first half of the poem. But the Paris Agreement, 17 Sustainable Development Goals under United Nations and people power are signalling that there might be some light at the end of the tunnel for the world.

In many aspects of our lives, 2016 may not have been all that great for everyone. Corruption, abuse of power, greed, oppression, and the rising cost of living continue to burden the rakyat.

But there have also been some minor victories that have helped us continue to have hope, persistence, and perseverance. These wins inspires us to believe again in the power of collective effort.

Indeed as long as everyone keeps on struggling and fighting for a better Malaysia, our beloved country can be a fair and equal place for all its Rakyat of various cultural and religious backgrounds.

To kickstart our 2017, Aliran and Kuasa, an environmental NGO based in Perak, would like to invite everyone to the screening of a documentary When Two Worlds Collide, directed by Heidi Brandenburg and Mathew Orzel.

We, Malaysians, have something to learn from their struggle.

The 90-minute screening will be followed by a discussion with Kuasa activists and the audience.

Our hope is everyone attending this screening will be able to reflect on what happened over there and perhaps discern any parallels with what’s happening in our own country in the way the indigenous people’s right to their land is treated and our responsibility towards this community.