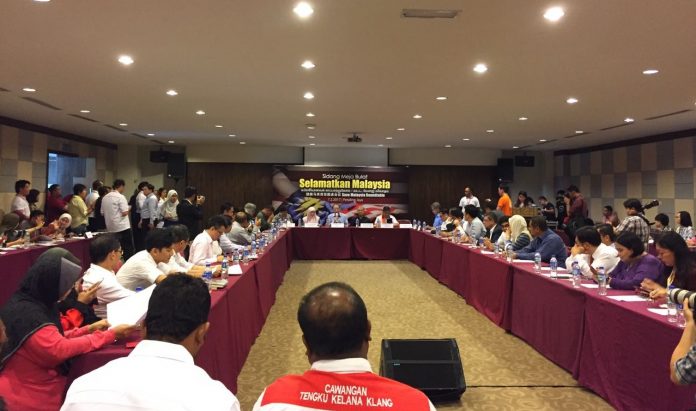 Azmil Tayeb attended the Save Malaysia Roundtable and came away with the distinct impression that opposition parties have much to do if they hope to unseat the BN in the coming general election.

Representatives of major opposition political parties and non-governmental organisations gathered at Bandar Utama, Petaling Jaya in a collective effort to stem the rot now plaguing the country, by forcing the prime minister to step down and replacing the Barisan Nasional-led government in the next general election.

The event purposely coincided with the 114th birthday of Tunku Abdul Rahman, the father of Malaysian independence and the first Prime Minister, as a reminder of how far the country has strayed from its founding ideals as envisioned by Tunku.

[The civil society Coalition for Free and Fair Elections (Bersih 2.0) made a conscious decision not to attend what it perceived to be a media event, as it felt there would be little space for civil society to discuss issues, especially in the presence of reporters. Moreover, only a few individuals from civil society were invited – including Bersih 2.0 chairperson Maria Chin Abdullah, who declined to attend – so those present were hardly representative of civil society.]

Despite being a gathering of who’s who in the opposition camp, there was also a glaring absence of representatives from the Islamic party Pas and Parti Sosialis Malaysia (PSM).

The event started with the DAP supremo, Lim Kit Siang, giving a brief overview of his political struggles over the past five decades and his working relationship with past prime ministers, including Tun Abdul Rahman and Tun Abdul Razak, the current prime minister’s father.

It was followed by presentations from Petaling Jaya Utara MP Tony Pua on the 1MDB and China financing scandals, chiefly the East Coast Rail Line, and from Pandan MP Rafizi Ramli on the corruption and financial mismanagement in Malay-Muslim public institutions such as Tabung Haji, Felda, Mara, and the Armed Forces Fund Board (LTAT).

Rafizi stressed the importance of courting Malay voters in order to win the next general election as, according to his polling data, 40 per cent of Malay voters still support Barisan Nasional. He cited a credibility problem with the opposition among the Malay electorate and urged opposition parties to stop being condescending towards the rural Malay constituency. They should be sincere, not opportunistic, in their approach towards the rural voters.

Ambiga Sreenevasan came on next and talked about the integral role of a free and fair election in bringing about political change. Specifically, she urged the opposition parties to rise above their quarrels and make preparations for the general election a priority. They need to remain steadfast against the gerrymandering attempts by the BN government.

Ambiga also spoke of the need to highlight the issue of poverty, which has long been under-appreciated by the opposition parties. In this, she lamented the absence of PSM’s Dr Jeyakumar Devaraj at this event – someone with whom she had worked tirelessly on this issue.

Finally, she encouraged the opposition to use the court system as a means to pursue their grievances against the government – even if the chances of winning were slim. The reason: the legal proceedings themselves would lay bare all the evidence, thus making the scandals public and more transparent.

The next segment of the event was an open session during which a few NGO and party representatives raised concerns.

First up was Zaid Kamaruddin from Ikram. He urged the opposition parties to act as a “government in waiting”, effectively a shadow government with a prime minister-designate and shadow cabinet ministers. According to him, this could only be achieved if the various parties put the interests of the people first, over their own self-interest.

Next was Salahuddin Ayub from Amanah, who said there was a limit to negotiations (implicitly alluding to the current deal-making efforts between Bersatu, PKR and Pas). He said that PKR, DAP, Bersatu and Amanah should unite as one opposition force in the upcoming election and focus on straight fights with the BN.

Next up – Cynthia Gabriel from C4. She too asked the opposition to focus on one-on-one electoral contests and come up with a public statement of its intention to do so and a concrete plan to achieve it.

The final two speakers represented the “young” section of the roundtable. The first was Syed Saddiq from Bersatu, who also stressed the importance of establishing a shadow cabinet and instilling a “personal touch” in election campaigns. Next, Farhan Haziq from Dapsy implored the opposition to move as a “team” and to come up with a specific manifesto for young people.

The penultimate segment of the event consisted of speeches from major leaders of the opposition parties in attendance.

Mohamad Sabu touched upon the prevalent perception among the Malays that their fate and status in Malaysia would take a turn for the worse if the BN government was no longer in power. He emphasised the need for the opposition to work in changing this perception.

Lim Guan Eng, the Chief Minister of Penang, brought up three main points in his speech: first, the importance of Sabah and Sarawak in ensuring the electoral victory of the opposition; second, economic issues as a “game-changer” in the election; and third, the need to instil belief among the electorate that a BN win is not inevitable and for the opposition to bring national issues to Sabah and Sarawak via lawsuits filed in the courts there.

PKR leader Dr Wan Azizah briefly talked about her personal relationship with Mahathir over many years and stressed the need to put old grudges aside for the sake of the country’s future.

Finally came the turn of the main act. Tun Dr Mahathir Mohamad, the former Prime Minister and now chairperson of Bersatu, trained his focus on two main points: first, elections as the only means for change since other avenues such as Parliament (through the vote of no confidence) and the Conference of Malay Rulers are simply ineffective; and second, the threat posed by future immigrants from China to the racial harmony in Malaysia.

He said that any changes effected through the election would first have to ensure that the present political dominance of the Malays would not be affected. Mahathir then expounded at length on the need to stem the mass influx of (future) immigrants from China due to the current deals struck between China and the BN government. According to him, the current socio-political arrangement between the major ethnic groups in Malaysia had worked well and any imbalance in demography could lead to disharmony and possibly violence.

Mahathir stressed that Malaysia had to stop an influx of immigrants from China before it was too late. And the only way to do this is to force Najib Razak to step down as Prime Minister and replace the BN government. The event then ended with an open session with the media.

As an impartial observer, I list down some thoughts about the event that crossed my mind.

First, I found it mind-boggling and simply inexcusable to not include PSM in this effort as the party has long played a key role in the struggle against the depravity of the BN government.

Second, there was the proverbial 800-pound gorilla in the room barely touched by the participants: the role of Pas in this effort, namely in the recent deal-making between Pas and Bersatu. Simply put, without solving the “Pas question”, there can never be a genuine and effective collaborative effort to take over Putrajaya.

Finally, I found Mahathir’s use of the xenophobic card quite disturbing, and this was not helped by his holding up Donald Trump’s travel ban on Muslims as an example. Moreover, it is clear that he is still encased within the old race-based political mindset that sees everything according to the perceived self-interests of each ethnic group, as opposed to the interests of all Malaysians.

In short, if Malaysia wants real and lasting change, then it first needs to move away from ethnic-based politics to a political culture based on common issues and struggles that transcend race, religion, and socio-economic background.