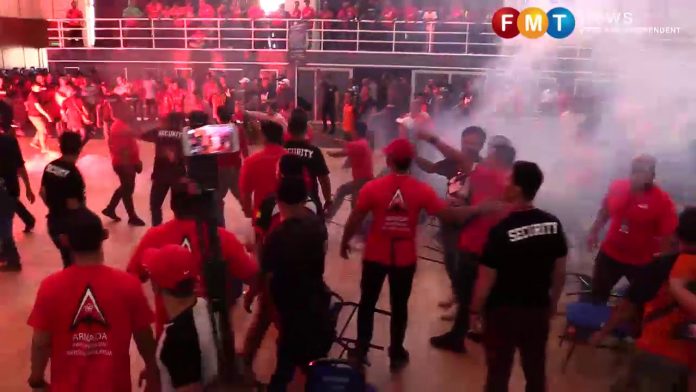 If there’s one thing – apart from cowardice – that the recent stormy ‘Nothing to Hide 2.0’ forum did reveal, it is that political violence and gangsterism have become prevalent in our political landscape to the extent that it is about to be – if it isn’t already – normalised.

In this particular forum, flares were lit, and chairs and shoes were thrown by certain individuals apparently in cahoots with those who were uncomfortable with the event. You just don’t throw things, especially dangerous ones, when you disagree with your political opponents.

There were other incidents in the recent past that were just as threatening: Bersih leaders and certain participants being mobbed and threatened with violence, and certain other social activists, who have been vocal in their criticism of the powers that be receiving death and rape threats. In other words, their human rights have been violated.

Such violent behaviour obviously also harms democracy, which should provide public space for civilised dialogue, discussion and debate. In a society where the mainstream media are highly controlled, public forums and ceramah are the few avenues available for ordinary people to have access to views and information that these media would normally not cover.

What is also damaging to democracy is that the outbreaks of violence during such forums would eventually criminalise civil discourse. Such violence would also intimidate those who want to stand up and be counted when they bear witness to abuse of power and corruption. In short, it has the effect of muzzling conscientious and concerned citizens.

That is why some 51 civil society groups have come together and made a united stand against such political violence and gangsterism in our contemporary politics.

Unfortunately, there are also other ways in which those occupying positions of power have come silent in the face of social injustice and the endemic corruption that is bleeding the country dry. These people seem to have succumbed to the carrot dangled before them by the state, which in turn has brought about what K Haridas rightly terms as a leadership deficit in the country.

This insidious attitude weakens human gumption and in turn throws into disarray the system of checks and balances in the country’s governance particularly in the case of the huge elephant in the room, ie the 1MDB scandal.

The death penalty is also an issue staring squarely at us. There is a growing concern in 140 nations in the world that capital punishment robs those who are convicted of a second chance in life – of possible atonement, of rehabilitation and, more importantly, of justice. If the death penalty is abolished and there is opportunity for a second chance, a life that would otherwise have been snuffed out has the potential of growing healthily.

As Haridas rightly points out, “failures of justice in trials that end in a death sentence cannot be reversed. Unfair trials are known, and the majority of the victims are those from the poor and marginalised sectors of society.” This is why Aliran supports the call for the abolition of the death penalty in view of the past travesties of justice.

It is also a matter of justice that led civil society groups such as Lawyers for Liberty to voice their concern over recent amendments to the Prevention of Crime Act 1959 (Poca). Apart from its detention without trial component, “Poca procedure offends all basic rules of natural justice, evidential requirement and due process,” asserts Lawyers for Liberty.

Surely seeking justice for those subjected to this kind of unjust procedure should not be equated with the act of defending criminals, as claimed by no less than Deputy Prime Minister Zahid Hamidi. Given the gravity of this amendment – and other bills as well – the government should not have rushed through this piece of legislation in Parliament in the wee hours of the morning when the attention of many lawmakers had been reduced and the majority of Malaysians were fast asleep!

As people in Peninsular Malaysia approach the 60th anniversary of its independence, they should train their sights to the noble objective of ensuring that they continue the struggle to fight against various forms of injustice for the collective good of their Negaraku.

Escalating violence and arrests in Papua and West Papua