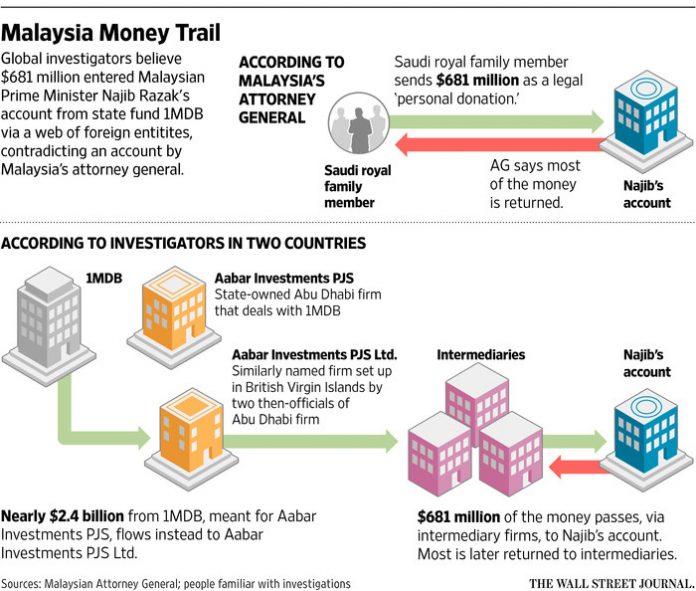 Instead of making things so much worse for himself and the country by blocking websites, sacking critics and going after them, the prime minister should just order his lawyers to sue, says Zaharom Nain.

As Prime Minister Najib Razak clings on desperately to power, evidently by hook or by crook, there are so many questions being asked by all Malaysians in kopi tiams and mamak stalls and, I’m sure, in the poshest of KL restaurants.

These range from the expectant, “How long more can he cling on?” to the more speculative “How much more do you think he’s managed to stash away all this while; more than Marcos, ah?” to the fearful “Is Malaysia going to go bankrupt?”

But surely, the most widely-asked question raised by those of us who are not really bothered about his reputation, but are more concerned about Malaysia’s is, “Why hasn’t he sued the various parties concerned if he asserts that he is innocent and is being defamed?”

Indeed, after the commotion in the media created by his legal team, nothing more has come up with the threat to sue the Wall Street Journal (WSJ), the first internationally credible newspaper to report in depth on the shenanigans in 1MDB and the RM2.6bn in his personal account.

Of course, local politicians, like the irrepressible DAP MP Tony Pua, and credible local news media, such as The Edge and The Malaysian Insider, had been relating the sordid tale of this `grandmother and grandfather of Malaysian scandals’ before the WSJ reported it.

And, of course, there was (still is) Sarawak Report, doggedly going about its business of providing more revelations, despite its website being blocked by the Malaysian Communications and Multimedia Commission (MCMC), which now evidently operates as Najib’s censor rather than an independent arbiter and regulator.

Yet, despite all these revelations and allegations, despite assertions by his minions that it is all a big conspiracy to `topple’ the PM and, of course, by extension, the `duly elected’ government, the very basic thing he could have done – sue all their butts off for slandering him, for tarnishing his and, more importantly, this country’s, reputation – he has failed to do.

Now his sacked deputy, Muhyiddin Yassin, reveals that the (also-sacked) former attorney general Gani Patail had told him that he had enough evidence to charge Najib. But, in response, the refrain coming from Najib’s side is…wait for it… that this illustrates that there was a conspiracy to topple their boss.

Excuse me, hello? What serious illegal substance have you guys (and gals) been smoking? And do you think we – purportedly simple Malaysians – have had a lobotomy?

Surely, you don’t now expect us simple Malaysians to swallow your imprudent re-assertion that this illustrates there is a conspiracy against Najib? Seriously, you people continue to sound worse than a broken record.

It is bad enough that earlier in the week, another one of these mindless minions – a kid who allegedly loves to drop names and post pictures of him posing with well-known personalities – said that a case against the WSJ was impossible to win Najib any financial compensation due to US laws.

Of course, this was debunked by real legal experts.

In any case, so what if the BN-appointed (not popularly elected) prime minister of this country could not receive financial compensation for suing WSJ (or the other organisations who stand by the accuracy of their reports)?

Isn’t he, by his own admission and by his actions, rich enough already?

What is important for all of us Malaysians is that this scandal, these accusations, which surely must have circumnavigated the world more times than all the major explorers and airlines combined, continues to sully Najib’s and, more importantly, Malaysia’s reputation.

And, instead of making things so much worse for himself and this country we call our home, by blocking information websites using the flimsiest of excuses (`national interest’ and `national security’, my foot!), sacking people and getting the police to question them, he really should just order his lawyers to sue.

Unless, of course, he has something to hide.