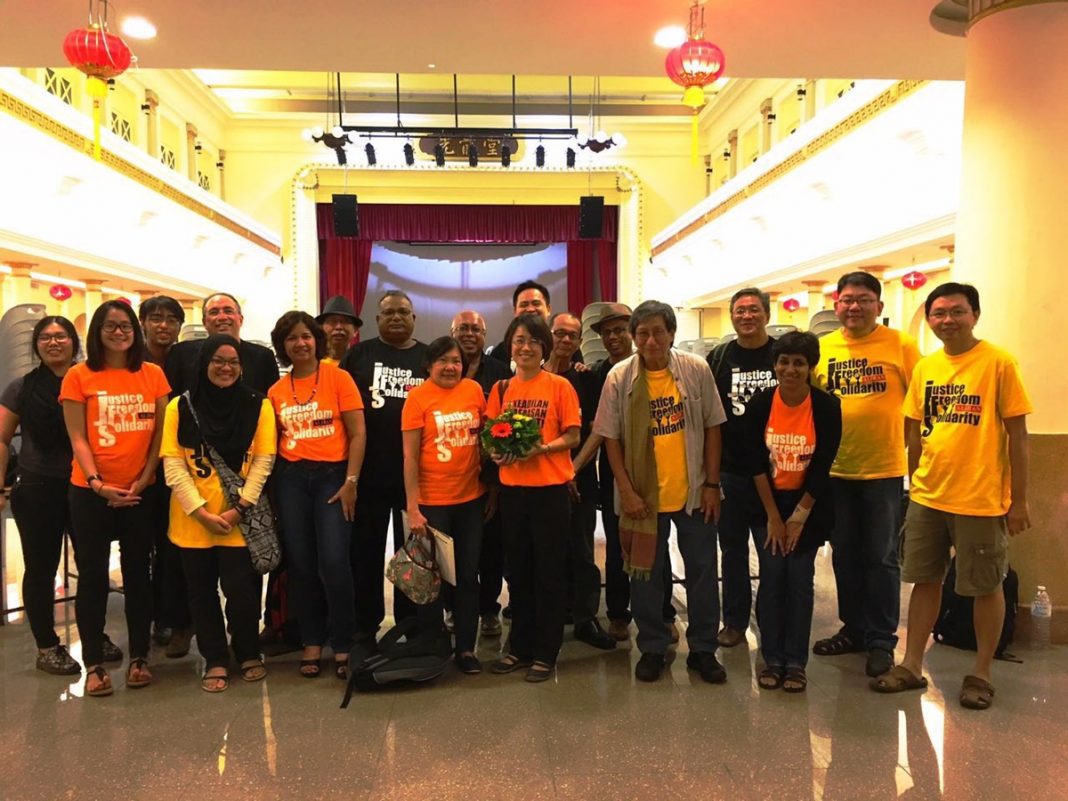 An Evening with Aliran 2016 was held on 23 July 2016 in the KL Selangor Chinese Assembly Hall with the theme Justice, Freedom, Solidarity.

It was an engaging, even exhilarating evening that mixed serious political discussion with exciting entertainment. More than 500 people turned up.

Her speech that evening focused on the 1MDB financial scandal, a problem that has been unfolding for almost two years. Just a week before the evening, the US Department of Justice had moved to seize all assets in the US belonging to certain persons and companies associated with 1MDB who had allegedly broken US financial laws in financial transactions to, in their words, “defraud Malaysia”.

Having gone through the 126-page Department of Justice report with a fine tooth comb, the legal expert Ambiga shared with the those present the contents and its legal implications in simple layperson’s terms. For an idea of her engaging style connecting to ordinary people, check out this two-minute video clip:

Earlier that evening, Aliran president Dr Francis Loh delivered a welcome speech. He shared his insights on why Malaysian politics was still lagging behind the Malaysian economy and society, which had witnessed so much transformation in past. For Francis, it is Umno, which had accumulated wide corporate interests and evolved into a widespread patrimonial system that is at the core of this lag.

The domination of Umno-BN for almost 60 years had also allowed it to penetrate and ‘capture’ the government machinery ranging from the judicial system to the security and law-and-order apparatus to the educational system, etc. Read Francis’ speech here.

The highlight of the evening was surely the performance of the Aliran Singers. They had written new lyrics to well-known and popular tunes.

The opening number, tongue-in-cheek, talked of this party which would protect its members who were busy looking for funds and donations from all over.

It was followed by a second number Where has all the Money Gone? to the same tune of almost the same question made popular by Peter, Paul and Mary.

Yet another number, Return to Saudi, sung to Elvis’ Return to Sender, poked fun at the prime minister’s claim that he had received a donation from some Saudi prince and that he had sent the money back…

Look at these photographs capturing the performances and the guests that evening.

… and the Jabar Laura and Company dance troupe.

We also record our heartfelt appreciation to our KL organising team and the volunteers who worked tirelessly to make the evening a success and to cartoonist Zunar for gracing the occasion.

Finally, Aliran thanks all of you for attending this event and donating generously.

No doubt, we have raised enough funds to be around for at least another one to two more years. See you at our next fundraiser!