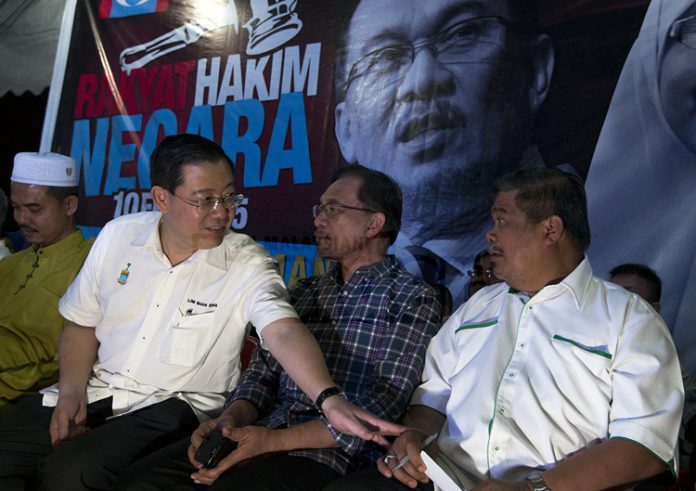 Many have argued that a Pakatan minus Pas would be a salutary development to ensure the longevity of common, progressive Pakatan policies, observes Johan Saravanamuttu.

Without doubt, the year 2014-2015 will probably turn out to be Malaysia’s annus horribilis in this decade and we still have four months left for perhaps even more egregious events to erupt.

So far, we have seen:

One could go on, but I want to touch on the break-up of Pakatan Rakyat (PR), which was surely an eventus horribilis to all right-thinking Malaysians. Many had placed much hope on the sustained development of a two-party or two-coalition political order after the 2013 election, but with the collapse of PR we may see an end to this process.

Still, one should also celebrate the achievements of Pakatan. Because of its formation, for the second time in Malaysian history, the ruling coalition lost the popular vote to the Opposition, the first time being in the 1969 election. In 2013, Pakatan Rakyat won 51 per cent of the popular vote but still failed to win a majority of seats due largely to the unfair character of the Malaysian electoral system.

But a crucial threshold was breached in two consecutive elections of Malaysia’s electoral history, the Barisan Nasional (BN) being twice denied its two-thirds majority of seats in parliament. The BN also consecutively lost control of three significant state governments – Kelantan, Penang and Selangor – at the hands of Pakatan.

This path-dependent electoral success of the Pakatan, however, appears now to be squandered away by the bickering within and among the PR parties and its disbandment just two years after GE13. It has not help that Anwar Ibrahim, Pakatan’s symbolic leader, has been incarcerated yet again at a time when his leadership is sorely needed.

What is truly confounding to many people is why the Pakatan parties seemingly chose to ignore the importance of their achievements and opted in an almost facile manner for disbandment of the coalition. Surely, its leaders could have exercised more due diligence in considering whether the coalition could have been saved? Hardly any attempts were made at conflict resolution.

Worse, Pakatan’s breakup comes at a time when it could be exploiting the internal dissension within Umno over the 1MDB fiasco and Najib’s highly beleaguered position in the BN today along with the collapse and weakness of some BN political parties such as the MIC, Gerakan and the MCA. The BN, while fragmented, has somehow remained institutionally intact in the face of Pakatan’s unseemly implosion.

This said, some argue that the Pakatan breakup was already in the making for months if not years given the obvious irreconcilable differences between two major Pakatan parties, Pas and DAP. Indeed, some have argued that the catharsis may be a necessary step towards the rejuvenation of a new, more stable and effective coalition of progressive parties and political forces. Let me explore this thesis.

First, it will be useful for our readers to be apprised of the sequence of events that brought about the collapse of the Pakatan and, more crucially, the factors and developments behind of this episode. Readers are referred to a previous Aliran newsletter.

The event that brought matters to a head was the 61st Pas Muktamar in early June, during which a resolution was passed calling for Pas to cut off ties with the DAP without debate being allowed, a decision that was sealed by the Pas Syurah Council confirming this on 11 July.

For all intents and purposes this Pas move brought an end to Pakatan Rakyat. The DAP, for its part, acted in some haste to cut off state appointments of Pas representatives at various levels of administration in Penang.

What made it worse for Pakatan was the defeat of the moderate group of Pas in the Pas elections. This group has been most supportive of the coalition and its common agenda but lost all their contested positions to the ulama faction, except for one person who also eventually relinquished his post in the Pas central committee.

The Pas-DAP rift had its roots in the days when the former DAP chairman, the late Karpal Singh, famously stated that Pas’ implementation of an Islamic state would be “over his dead body”. As fate would have it, Pas ulama under Hadi Awang’s leadership have persisted in pressing for hudud or Sharia-based criminal law to be implemented in Kelantan by attempting to pass an enabling bill in Parliament with Umno support.

Pas went as far as to participate in a joint technical committee with Umno set up for this purpose. The bill has not yet been passed with Umno seemingly dragging its feet on supporting the bill at the last parliamentary session. But Umno members in Kelantan were fully behind the hudud amendments passed unanimously in the state assembly on 19 March 2015.

With such unilateral actions on hudud policy by Pas, the damage done to its festering relations with the DAP was irreparable. The DAP had consistently complained that such moves were against Pakatan’s common manifesto.

Under Hadi Awang’s leadership, an attempt was made to revive “unity talks” with Umno and, with the passing of spiritual leader Nik Abdul Aziz on 12 February 2015, his guiding hand in stemming cooperation with Umno and maintaining steadfast relations with Pakatan parties was evidently absent and sorely felt.

There were suggestions that Pas president Hadi was again contemplating a “unity government” with Umno in 2013 after the general election, an idea that had surfaced as far back as 2008, although Hadi denied this. But Hadi did clearly pursue his plan to canvass Umno support for hudud legislation as we have seen.

Another event that brought matters almost to a head earlier for the Pakatan was PKR’s bungled so-called ‘Kajang Move’, orchestrated by the party to supposedly allow Anwar Ibrahim to take over the leadership of Selangor. This move was thought to be necessary due to the cumulative dissatisfaction with the actions and policies of PKR’s erstwhile Mentri Besar Khalid Ibrahim, who, inter alia, had inked a controversial agreement with the BN government for the management of water resources in Selangor.

In the event, Anwar was disqualified for the Kajang contest for technical reasons and PKR president Wan Azizah Ismail, his wife, stood in the by-election called on 23 March 2014 and duly won the seat. But Pas objected to her becoming the Mentri Besar and, after a convoluted sequence of events, PKR deputy president Azmin Ali coyly emerged as the MB with Pas support and the approval of the Selangor Sultan.

This development invariably created more frictions within Pakatan, and the situation in Selangor has remained somewhat dicey should Pas’ 13 lawmakers choose to withdraw from the coalition. At the time of writing, the Pas lawmakers seem content to remain as part of the ruling group, the current distribution of seats being as follows: DAP (15), Pas (15) PKR (13) in the 56-seat state assembly.

Pas’ own internal conflict has been simmering for a long time and had already caused the formation of the splinter group PasMa led by Kedah politician Pharolrazi Zawawi. This occurred quite early in the day not long after Pas’ disastrous outing in Kedah in GE13. With the results of the 61st Mukthamar, which effectively disempowered its moderate or progressive leaders, it seemed inevitable that a new organisation would also be formed under the aegis of this stronger group, with the prospect that eventually, it would be an alternative Islamic party to Pas.

All roads for the Opposition point to the reinvention of a ‘new’ Pakatan minus Pas. Many have argued that this is in fact a salutary development as Pas under the dominance of the ulama will not ensure the longevity of common, progressive Pakatan policies.

But a new coalition without Pas could fare poorly in the East Coast. It is conceivable that Pas will eventually join the BN as it did in the past. Alternatively, there could be an electoral pact worked out with Pas for Muslim-majority seats, assuming the latter does not opt to join the BN.

Given the Opposition’s axiomatic weakness in East Malaysia, the new Pakatan must also continue to court coalition partners on that terrain and not just rely on existing Pakatan parties there. The first test will come by way of a Sarawak state election due to be called within a year or so in 2016.

Finally, I would say there are four major conditions for electoral success of a new opposition coalition as shown in previous experiences and studies of past elections, namely:

Fulfilling these conditions are no doubt a tall order but a reinvented Pakatan has until possibly late 2017 to work towards these goals, with the hope that the BN coalition will in the meanwhile see further fragmentation and weakness because of leadership tussles and unresolved scandals.